“First, let me say to the families and students involved — my heart aches for you and I am sorry that we failed to provide the safe, welcoming, and affirming environment that we aspire to provide,” Ziegler said during a press conference on Friday, according to a report by ABC 7 News. 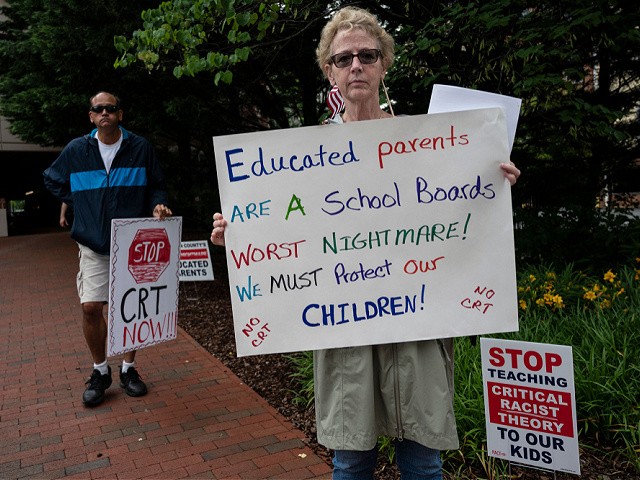 “We acknowledge and share in your pain and we will continue to offer support to help you and your families through this trauma,” the superintendent added. “For all of our students, our school-based Unified Mental Health Teams are available to anyone who needs care.”

Ziegler went on to say that “it is important to know that Title IX directs how schools must investigate allegations of sexual harassment/assault,” and insisted Title IX “provides equal protection for both victims and the alleged perpetrators.”

The superintendent added that “the process could be strengthened with some reforms.”

Ziegler’s statement comes after Scott Smith, the father of an LCPS student, said the school district tried to cover up his daughter’s alleged assault in the girls’ bathroom at Stone Bridge High School by a boy wearing a skirt. Smith added that his family is preparing to sue the school.

“I have no reason to believe at this time that any missing reports were due to an intent to hide any information from the Virginia Department of Education,” Ziegler insisted in his Friday statement.

“In the future, we will report events in real-time in our system and make corrections, if needed, following due process procedures,” the superintendent added.

“Recent events have also revealed that we have shortcomings in alternative placement options for students involved in serious discipline infractions,” Ziegler said. “A correction to this issue is one of my top priorities.”

In June, Smith was arrested for obstruction of justice and disorderly conduct during a Loudoun County school board meeting, where hundreds of parents voiced concerns about the district’s transgender policy and Critical Race Theory (CRT).

Smith said he went to the board meeting looking for answers regarding his daughter’s alleged assault by the male student wearing a skirt.

NEW VIDEO from inside the chaotic Loudoun school board meeting. 1/3 pic.twitter.com/tHDyzCz7KE

Over the summer, the school board voted 7-2 to approve transgender guidelines that will give students who believe they are the opposite sex access to school facilities, groups, and sports teams of their biological counterparts.

On Friday, Ziegler said he “wrongly” interpreted a school board member’s question about discipline involving bathrooms as “incidents involving transgender and gender-fluid students.”

“I want to speak to my comments at the June 22nd board meeting related to bathrooms,” Ziegler said. “Barts asked a question about discipline incidents in the bathrooms that I wrongly interpreted as incidents involving transgender and gender-fluid students.”

“I did this because I was viewing the question in light of the general questions and debate around policy 8040 that was occurring at the time,” the superintendent added.

“I regret that my comments were misleading and I apologize for the distress that error caused families,” Ziegler said. “I should have asked Board Member Barts clarifying questions to get to the root of her question, rather than assuming what she meant.”

Ziegler was referring to school board member Beth Barts, who earlier this year was found to be part of a private Facebook group called, “Anti-Racist Parents of Loudoun County,” which had created and shared a list of parents who opposed CRT, according to the political action committee Fight for Schools, which launched a recall effort against Barts and five other board members.

On Friday, no more than two hours after Ziegler read his statement, Barts posted her resignation letter to Facebook, adding that she would be resigning from the Loudoun County School Board effective November 2, 2021.

“This was not an easy decision or a decision made in haste. After much thought and careful consideration, it is the right decision for me and my family.”

The Loudoun County Sheriff’s Department confirmed that a sexual assault did happen in a bathroom at Stone Bridge High School on May 28, and said that they arrested a 14-year-old boy in the case, reports ABC 7.

Later, on October 6, a Sheriff’s Department tweet detailed another alleged assault by the same student at Broad Run High School, the report adds.

“How could you allow this alleged sexual predator to return to a Loudoun County public school before the court was wrapped up with our court situation?” Smith asked.

Meanwhile, Ziegler insists that LCPS “will move forward as a learning community that emphasizes safety and affirmation in an academically rigorous environment.”

“We will offer transparency where we are able, but also ask the community to appreciate that we must maintain student confidentiality,” Ziegler said.

“This has been a very difficult time for our community,” he added. “We are committed to finding ways to improve our processes to ensure that Loudoun County schools are safe for all of our students.”

At around the same time the alleged assault occurred in girls’ bathroom, LCPS suspended gym teacher Bryon “Tanner” Cross, who at a school board meeting cited science and Christianity when opposing the policy that requires teachers agree with children’s claims that they are members of the opposite sex.

Over the past several months, LCPS has turned itself into a national spectacle, known by many for pushing transgender and CRT propaganda onto its students while concerned parents desperate for any sense of normalcy air their grievances at meetings and rally to recall school board members, and rescind racist curriculum.