An electric Jaguar I-Pace vehicle caught on fire and burned to ash in Florida, but the vehicle wasn’t in a car wreck like many notorious Tesla fires — it was simply charging in the owner’s garage.

The electric car is the fourth known I-Pace battery fire that seemingly started on its own — a concerning amount of fires, given that there are so few of these vehicles on the road — according to a report by Electrek. 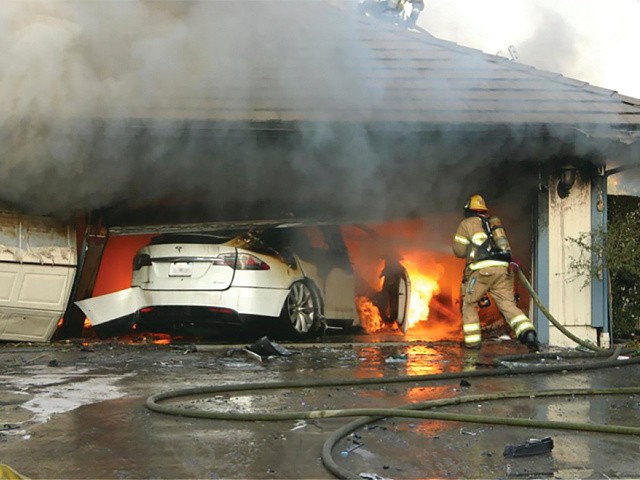 The Florida-based electric car owner, Gonzalo Salazar, told the outlet that he had purchased a brand new 2019 Jaguar I-Pace in 2020, and was driving the vehicle without issues for a few years, until one day the car caught fire in his garage, after having been charging for the night.

“On June 16, I plugged the car in before going to bed,” Salazar said. “In the morning of June 17, I woke up and unplugged the car. Later that morning, I set out to run some errands. I drove about 12 miles that morning before returning back home and parking the car back in the garage, leaving the garage door open.”

“As I was doing things at home, I heard pops coming from the garage,” he added. “I decided to go see where the sounds were coming from, and upon walking into the garage, I faced a thick wall of smoke. My thought immediately was, ‘When there is smoke there is fire,’ and I need to get the car out of the house garage.”

In an attempt to protect his home and pets, Salazar managed to move his smoking electric car out of his garage, to the street in front of his house.

Salazar explained what happened next:

I went back to the house to get my phone and also noticed that all the smoke in the garage now had filled my entire house because the A/C unit is right next to the garage door. While I was trying to ventilate my house from the smoke I called Jaguar roadside assistance to have them come get the car. When I ended the conversation with them there were more pops, but this time it was followed by fire from under the car. I then called 911 to come help with the situation. But this was not a slow burn, once the fire started there were multiple pops, and the car was just engulfed in flames rapidly.

Another EV fire… this one from Florida earlier this summer. A Jaguar i-pace was parked in an attached garage when the owner heard "popping" sounds and saw smoke puffing from the car. The car was moved outside before it burst into flames. I guess you can call them "lucky". pic.twitter.com/JUOwthCSb4

After the fire department extinguished the fire, Jaguar showed up and collected the remains of the vehicle. Salazar was not impressed, as he was left with having to clean up the debris on the street.

“My insurance company sent a forensic specialist, did their investigation, and declared the car a total loss,” he told Electrek.

Salazar added that Jaguar “is not being helpful at all,” and that the company claims it needs to “complete their own investigation.”

“But because of the risk of igniting the fire once again, they are unable to find a place where they can lift the car up, therefore their ‘investigation’ is on hold, and they are not taking any responsibility for what happened,” Salazar added.

Jaguar told Electrek that the company “is committed to our customers’ safety, and we are aware of this I-PACE incident in Boynton Beach, FL.”

“We have been in contact with and are cooperating with the customer’s insurance company expert regarding a vehicle inspection,” Jaguar added. “JLRNA [Jaguar Land Rover North America, LLC] is unable to comment further on your questions until the investigation is completed.”

Salazar’s Jaguar I-Pace is the latest electric vehicle to catch fire due to its battery.

Last month, a battery fire caused an electric bus to burst into flames in Hamden, Connecticut. Luckily, no one died in the inferno, although two transit workers and two firefighters were hospitalized as a result of the blaze.