2010 has already proven two immutable political facts. First and foremost, it proves that Conservative Women have astonishing courage and guts to endure so honorably the unprecedented hate attacks from the Left and Make-Believe Media. Second, it proves (yet again) that Leftwing philosophy embraces women (and minorities for that matter) only so long as they remain subservient to the leftwing agenda and, in effect, dutifully wear the Left’s Ideological Burkha, the new Women’s L.I.B. 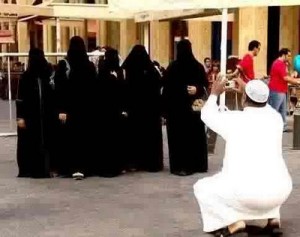 But as we have seen and has been well documented, conservative women who refuse to don the Left’s Ideological Burkha face the journalistic equivalent of stoning, shunning, and burning at the stake. As election day looms, the unprecedented misogynistic assaults against conservative women candidates have been reported by the Make-Believe Media with little sense of discomfort and no sense of outrage. Michelle Malkin summed it all up nicely:

Pundits and late-night TV pranksters have ridiculed O’Donnell for exposing liberal bias against conservative female candidates. But these same smug mockers have spent the past two years deriding Republican vice presidential candidate and former Alaska Gov. Sarah Palin, her children, her body, her accent and her brain. They snickered at reports of Democratic California gubernatorial candidate Jerry Brown’s campaign calling GOP challenger Meg Whitman a “whore.” And they shrugged off “The View’s” “bitch” sessions as shtick.

No discussion of issues to persuade voters. Just words like Witchcraft… Nanny… and Sexless One Night Stand, leaving you to wonder if the entire left-wing base resides in their respective parents’ basements. That’s the best they’ve got? Really?

These name calling personal attacks are journalist-equivalents of suicide bombings. Is their convulsive spew of misogyny truly intended to sway voters’ minds; or rather, is it intended as shock waves to prove their own ideological purity and thus, some sort of leftist journalistic martyrdom, meriting 72 poly-sci co-eds in an eco-utopian version of Geroge Soros’s Socialist heaven?

Just like the radical Islamic terrorists who journalists keep trying to understand, explain and defend, the MBM seems unconcerned with the truth, only ideological victory. If you hate the message, kill the messenger. My hat’s off to our strong women candidates resisting the MBM’s Journalistic Jihad to stone them figuratively for refusing to bow, to embrace the New Women’s L.I.B.

The MBM’s relentless sexism against conservative women candidates is the Left’s tell. They’re scared of the women’s vote. November 2nd is the Left’s Halloween.