***UPDATE: If you think, for whatever reason, that what happened to Justine Sacco is okay; I’m assuming you won’t have any problem with me watching your personal social media accounts, blowing up at Breitbart News what *I* deem offensive, and then, without asking you, contacting your employer and demanding you be fired. Your rules, not mine.

Friday night, a young New York-based communications director had her life destroyed on social media while she was out of touch with the world and could not defend herself. Justine Sacco was on a flight to Africa and had no Internet access when BuzzFeed’s Andrew Kaczynski apparently got the ball rolling by tweeting out to his 100k-plus followers that Sacco was responsible for what “may be the worst tweet of all time.” By the time she stepped off her flight, Sacco found herself a national pariah and fired from her job. Here’s the tweet that caused it all: 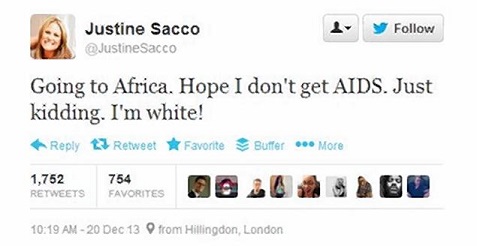 At the time of that tweet, Sacco had fewer than 200 followers (she has since deleted her account). And while in an airplane blissfully unaware that Buzzfeed and Co. had dispatched its flying monkeys against her, hashtags devoted to Sacco’s destruction climbed to the top spot on Twitter, her employer InterActiveCorp released a statement condemning her (and later fired her), and there were literally hundreds of articles and blog posts on the subject — including The New York Times, the left-wing BuzzFeed (naturally), The New York Daily News, The Hollywood Reporter, and, well, you get the idea.

Other than the very sad fact that a lot of bitter people obviously had nothing they would rather do on the last Friday night before Christmas, why did this happen?

To begin with, Sacco’s tweet cannot only be interpreted in the way Buzzfeed and its online lynch mob chose to interpret it; which is racist, insansitivist, Africanist, and AIDSist. Could it be that in a sloppy way Sacco was using humor to make a point about injustice? AIDS in Africa disproportionately ravages blacks on that continent. “I’m white!” sounds an awful like the kind of left-wing snark you hear every hour on MSNBC. For example:

If Rachel Maddow tweeted that, no one would question what she meant.

This isn’t me defending Sacco. I have no idea what was in her heart. But neither did those who followed BuzzFeed’s lead and managed, in just a few frighteningly short hours, to successfully place her head on a pigpole. Sacco is a young, professional, New York woman. Chances are about 99.9% that she’s a BuzzFeed-loving, Obama-voting, MSNBC addict.

Which leads to the most important question…

Why did BuzzFeed and others gin up a journalistic assassination squad to hit some nobody named Justine Sacco?

If you’ll pardon the mixing of metaphors, why was this private citizen plucked from obscurity by The Online Stasi for a trip to Room 101?

What we have seen happen to public figures, like “Duck Dynasty’s” Phil Robertson, who dare offend the political/media left-wing elite is frightening enough. Is this group now so addicted to the taste of bloody scalps that no one is safe — that any obscure citizen with only 174 Twitter followers can have their social media door broken into and lives ruined by the likes of BuzzFeed: Speech Detectives?

Or maybe it is something else.

Any time, day or night, you can use  the search feature to look up “n*gger, AIDS, gay, homosexual, f*g,” and literally find hundreds of thousands of tweets filled with unquestionable venom and hate.

So why Justine Sacco?

How did this nobody living in a social media world buried in tens of thousands of truly racist and homophobic nobodies, find herself in the crosshairs?

If BuzzFeed and Co.  wanted to feel self-righteous about themselves, there are literally millions of tweets out there that are unquestionably indefensible and that are not written by some defenseless, unsuspecting woman about to step off a plane and into social media Hell.

Maybe BuzzFeed and its sorry band of elite media minions chose Sacco to send an intimidating message that says no one is safe from their speech rules, even nobodies with 213 Twitter followers. Randomly pulling people from their online homes as an example to the rest of us, is certainly going to have a chilling effect.

But maybe it was a targeted hit based on a personal grudge or agenda we will never know about.

ADDED: Some are telling me Sacco is guilty of penning other “tasteless” tweets, and point to these:

I like animals, but when it’s this cold out I’ll skin one myself for the fur,” she once tweeted to the animal rights group PETA.

I can’t be fired for things I say while intoxicated right?

I had a sex dream about an autistic kid last night. #fml

So we are required to assume that out of 407 tweets, all of them are tasteless jokes, including the one about Africa? Or is it now just BURN THE WITCH! for not being terribly effective at being Sarah Silverman?

Good heavens, we are talking about a private citizen’s life here.

What the hell is the matter with some of you?

On a late-December Friday night, an online lynch-mob destroyed the reputation, career, and life of a young woman and private citizen, and did so without the benefit of the doubt or hearing her side of the story.

If you want to live in BuzzFeed’s “Watch what you say” world because it gives you a snarling sense of sanctimony, you’re not only ill but too stupid to know you are also a target.

ADDED: Some are now justifying their diseased sense of self-righteousness based on the idea that Sacco was a PR executive.  Tell me, then, where do we draw the line when it comes to plucking The Obscure out of obscurity for career-destruction?

Does it stop at PR executives?

If you think this woman should have been fired, fine. But your outrage should be directed at an elite media lynch mob that set out to destroy a private citizen without the benefit of the doubt or hearing her side, not some immature woman whose only crime is trying to ape Sarah Silverman.