The Daily Express newspaper posted a video Thursday which purports to show a woman screaming as she is attacked in Cologne, Germany, on New Year’s Eve. In fact, the video in question was shot in Cairo in 2013, and the audio comes from a completely different clip of an assault that also took place in Cairo’s Tahrir Square in 2013.

The Express published the bogus clip under the headline, “VIDEO: Harrowing footage of screaming women in Cologne main square emerges.”

At the very end of the story, the Express notes, “The video, uploaded to Youtube, appears to be mobile phone footage and the title of the video says it is from Cologne, however this has not been verified.”

In fact, the video in question has been online at several different video sharing sites for more than two years. It is believed to show the lead up to a sexual assault that took place in Tahrir Square, Cairo in 2013.

The assault itself was confirmed at the time by a reporter from an Egyptian news station and by the Dutch Embassy which issued a statement saying, “A Dutch woman of 22 was attacked in Tahrir Square on Friday evening. The Netherlands Embassy has assisted the victim, and after receiving emergency treatment in a Cairo hospital she was repatriated to the Netherlands in the company of family.” However, even the connection to the video appears somewhat speculative as the identity of the victim was never released. 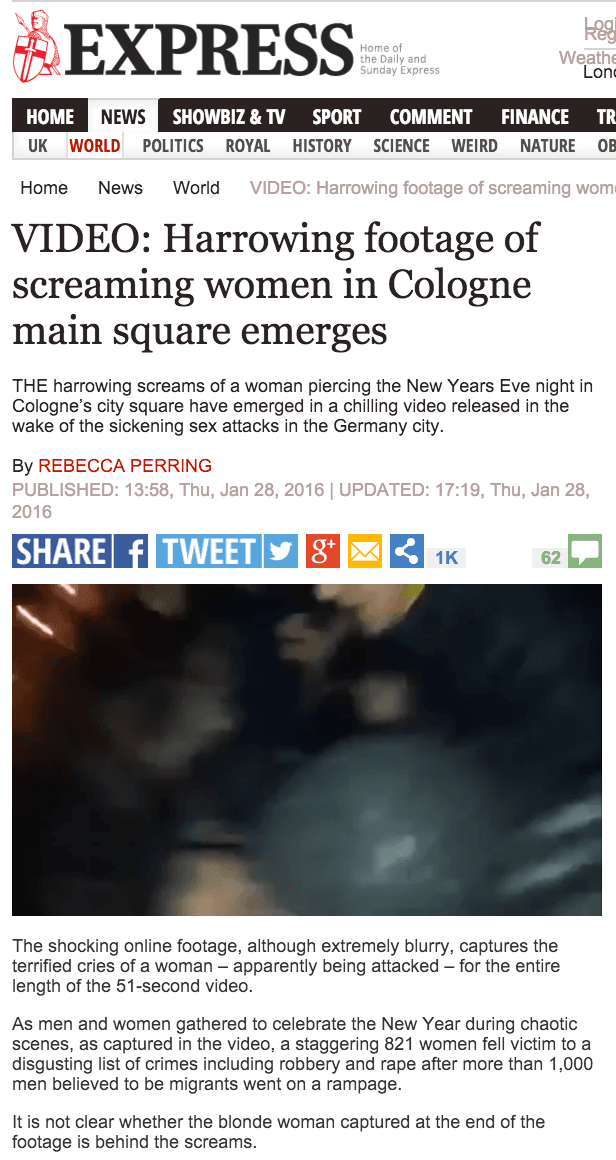 But this is not the only false element of the story. The high-pitched screaming heard in the clip comes from a different video of an assault in Tahrir Square, also from 2013.

A portion of that clip can be seen (and heard) in this 2014 Sky News report in which Egyptian reporter Hania Moheeb describes her own sexual assault in Tahrir Square in 2013.

Moheeb reports that a total of 19 sexual assaults took place that night within a span of four hours.

The confusion (intentional or otherwise) regarding these clips dates back several weeks.

A silent version of the 2013 Cairo video was posted to Facebook on January 7th with a caption mentioning Cologne, Germany, and New Year’s Eve.

A day later, the same video appeared on YouTube with the title stating it showed a sexual assault in Cologne. That clip is also silent.

Finally, on January 13th, a new version of the clip was posted on YouTube with dubbed audio of a woman screaming. The clip is titled, “Muslims Immigrants Sexual Assaults at Girl In Cologne New Years Eve.”

While there is no doubt that hundreds of sexual assaults took place in Cologne on New Year’s Eve, the audio and video which purport to show this come from Cairo and are more than two and a half years old.

UPDATE: Following this article, the Express has removed the story entirely with no correction or clarification issued.