In a macabre hit piece, the Washington Post has launched a smear campaign against important Christian leaders who espouse Biblical morality on homosexuality, labeling them as “enemies of equality.”

Employing hyperbolic, McCarthy-esque rhetoric, Post writer Jonathan Capehart actually states that there is a “vast right-wing conspiracy” out to deny gays in America their “humanity and dignity.” Capehart goes on to say that there is a “conservative cabal actively working the levers of power to block their rights.”

Mining material from the LGBT lobby group “Freedom for All Americans” (FFAA), Capehart says there has been a coordinated attack on LGBT persons under the guise of defense of religious liberty in America, such as “Indiana’s so-called religious freedom law.”

The FFAA created a chart, conveniently reprinted by the Post, blacklisting the Christian leaders most active in opposing same-sex marriage and affirming the rights of Americans to conscientious objection when asked to do something they consider morally wrong. 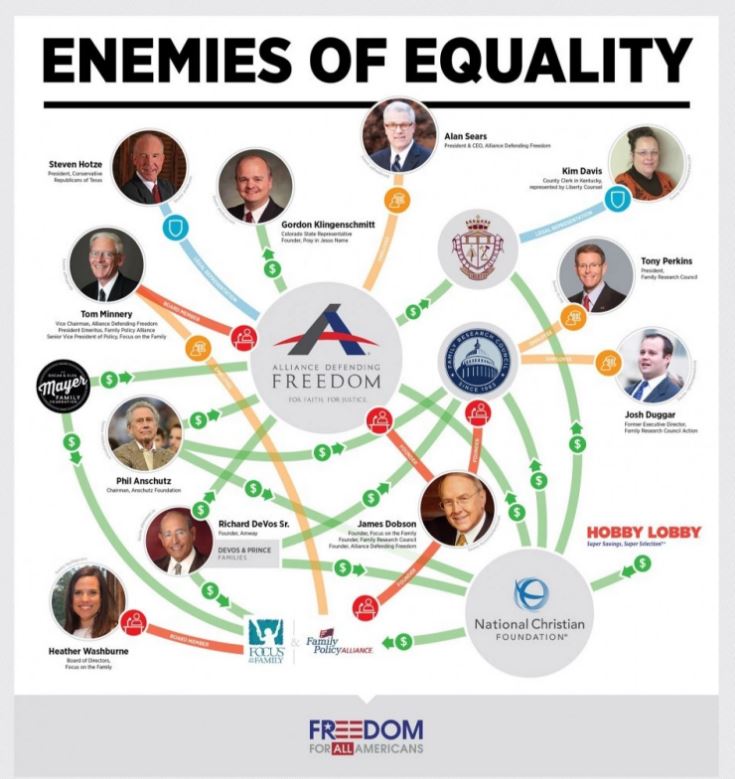 The essay attacks Alliance Defending Freedom (ADF) as “one of the hubs of this coordination,” as well as the National Christian Foundation (NCF), the Family Research Council (FRC) and Liberty Council, accusing them of “aggressively working to chip away at the equal rights of LGBT Americans.”

The piece also stoops to an ad hominem attack on Kim Davis, the Kentucky county clerk who refused to issue a marriage license to a same-sex couple last year, citing her religious beliefs that compelled her not to cooperate in sanctioning such a relationship.

In his remarkably prescient 2015 dissent in the case of Obergefell v. Hodges, Supreme Court Justice Samuel Alito predicted that after the Court’s woeful decision proponents of a traditional understanding of marriage would be pilloried despite the Court’s assurances that rights to freedom of conscience would be respected.

Alito prophesied that Obergefell would be used to hurt Americans who may not share a contemporary view of marriage as a malleable, plastic arrangement between an unspecified number of unspecified persons.

“It will be used,” he wrote, “to vilify Americans who are unwilling to assent to the new orthodoxy.”

By comparing traditional marriage laws to laws that denied equal treatment for African-Americans and women, Alito continued, the majority sets up a vast number of Americans for terrible harassment and abuse.

“The implications of this analogy will be exploited by those who are determined to stamp out every vestige of dissent,” he wrote.

“Perhaps recognizing how its reasoning may be used, the majority attempts, toward the end of its opinion, to reassure those who oppose same-sex marriage that their rights of conscience will be protected.”

“We will soon see whether this proves to be true. I assume that those who cling to old beliefs will be able to whisper their thoughts in the recesses of their homes, but if they repeat those views in public, they will risk being labeled as bigots and treated as such by governments, employers, and schools,” he wrote.

If the Washington Post piece is any indication, Alito’s forecasted storm is already on the horizon.