CNN Politics tweeted an image Thursday of both congressional baseball teams gathered on the field, kneeling in prayer. The caption of the image, though, said, “Members of the Democratic team,” as if those kneeling in prayer in the photo were only Democrats.

The attempted murder became one of the biggest stories in the nation on Wednesday as Louisiana Rep. Steve Scalise and several others fought for their lives in the hospital after the shooting. The story continued into Thursday as both congressional baseball teams insisted that the long-running charity game should go on as scheduled.

Before the game began, both teams came to the field and knelt together in prayer.

Enter the CNN Politics Twitter account to tell its fans that only the Democrats knelt in prayer, with a caption reading, “Members of the Democratic team gather on the field for a prayer before the Congressional Baseball Game.” A screenshot follows as CNN deleted the original tweet: 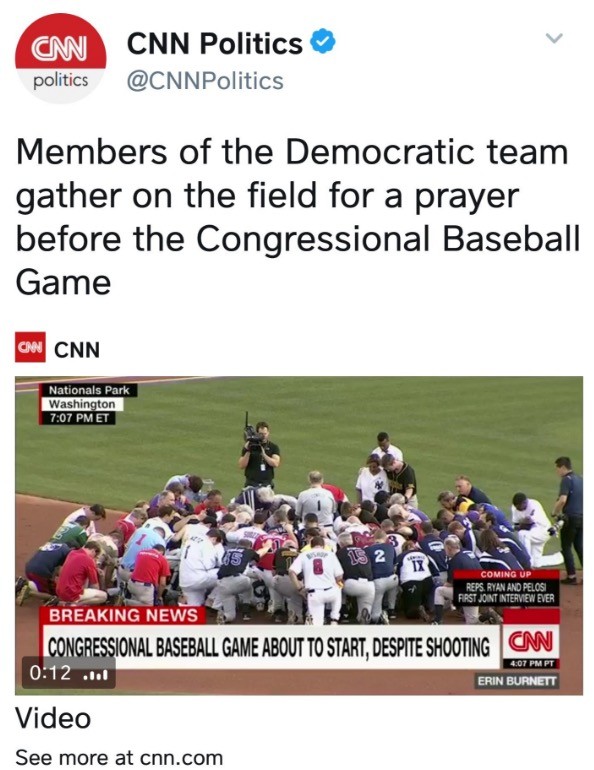 The cable news network was immediately inundated with Twitter users enraged that the “news” network whitewashed history by removing the fact that the image depicted both the Democrat and the Republican teams kneeling in prayer.

Not long after being called on the misleading caption, CNN deleted the tweet and re-tweeted the image:

Members of both teams gather on the field for a prayer before the Congressional Baseball Game (corrects who prayed) https://t.co/OQGigBrpVQ

CNN had issued no acknowledgment or apology for its original tweet before this story was posted.