In 1966, left-wing activist Mark Lane published a book arguing that the assassination of the 35th president, three years earlier, could not possibly have been carried out by Lee Harvey Oswald.

Lane’s book, titled Rush to Judgement, concluded that there must have been a larger conspiracy at work, involving multiple gunmen, probably operating from the legendary grassy knoll. That same year, Lane starred in a documentary movie with the same title, on the same topic.

As we reflect on the three-year gap between the Kennedy assassination in 1963 and the release of Lane’s product in 1966, we might note that events moved a lot more slowly in those pre-digital days; still, events did move in that analogue era. As The Los Angeles Times recalled a quarter-century later, “Rush to Judgment opened the floodgate for [Kennedy assassination] conspiracy theories.”

In his conspiracy theorizing, Lane was soon joined by the eccentric district attorney of New Orleans, Jim Garrison, who spun an elaborate skein of fantastic fantasies, implicating various local businessmen. One innocent victim of Garrison’s legalistic marauding was Clay Shaw, who was tried in 1969 and acquitted within an hour. 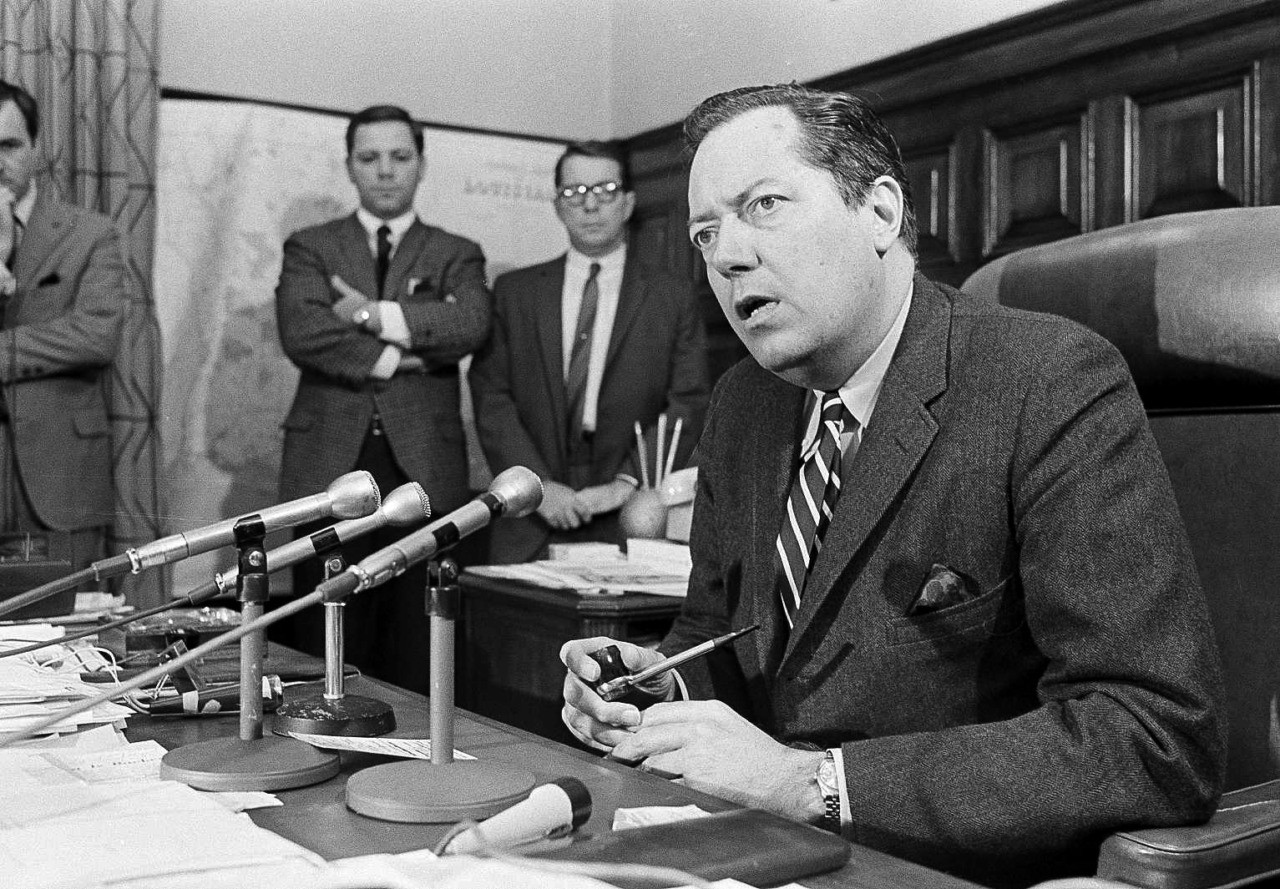 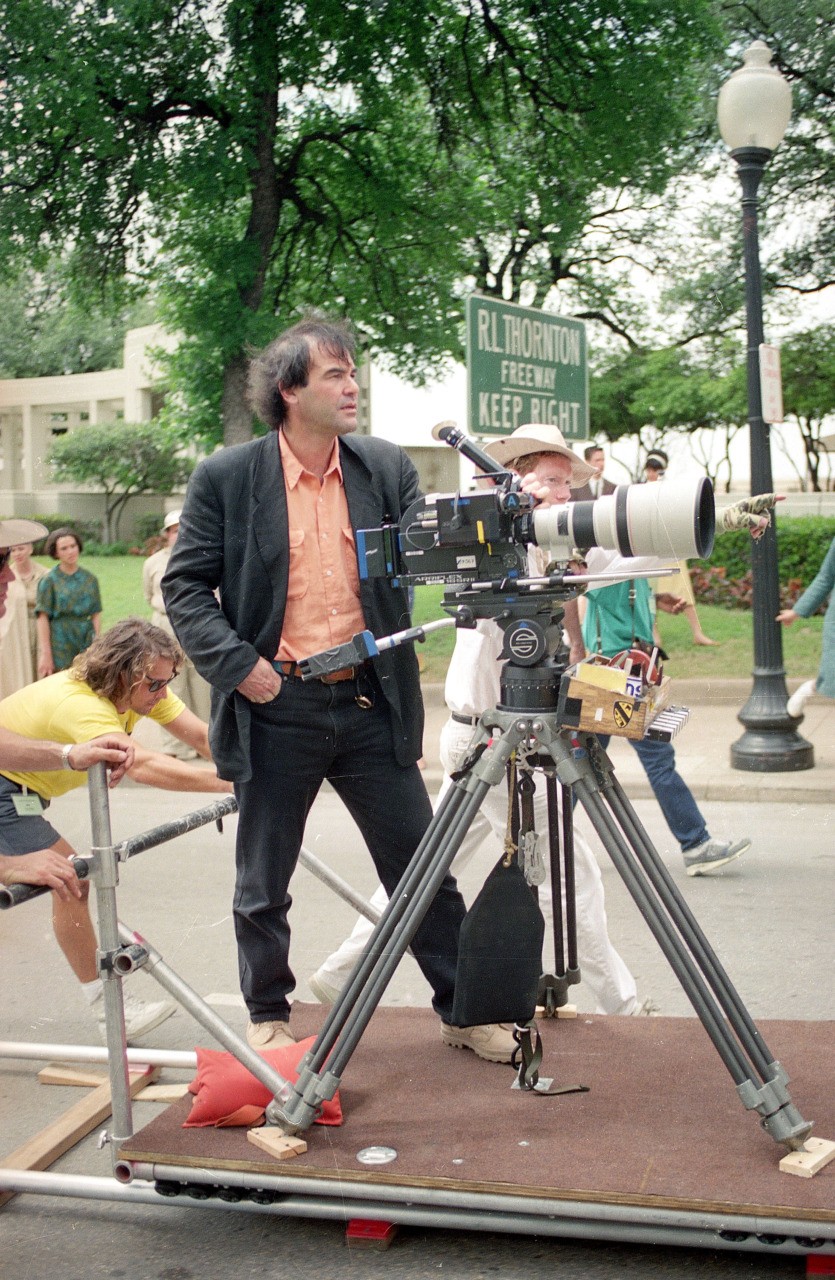 Garrison was soon out of office amidst clouds of corruption, and yet he continued to peddle his ever-escalating theories, implicating everyone from J. Edgar Hoover to Earle Cabell, the onetime mayor of Dallas.  Most consequentially, Garrison found an eager listener in Hollywood director Oliver Stone.  In 1991, Stone released the film JFK, in which Garrison was heroically portrayed—by no less than Kevin Costner, then at the peak of his acting career—as a valiant truth-teller, battling vast sinister forces.  Stone’s conspiracy-mongering film was laughable then, and now, and yet, of course, it has assumed a permanent place in crackpot pop culture.

So for more than a half-century, we’ve had to deal with JFK conspiracy theories—and maybe we always will.  (In fairness, one can say that there will be loose ends forever in the case, as there are with any important historical event.  And yet the core finding of the Warren Commission, that Oswald was the lone gunman, remains sturdily intact.)

So now to the Trump-Russia story, which took an unexpected turn over the weekend when Mueller released his report, asking for no more indictments and finding no proof of collusion. The headline in The Washington Post on Monday morning read: “Mueller finds no conspiracy.”

To say that many leading Democrats are now down in the dumps is an under-statement; their hope that the legal process would solve the challenge of the 2020 presidential election has now been obliterated. 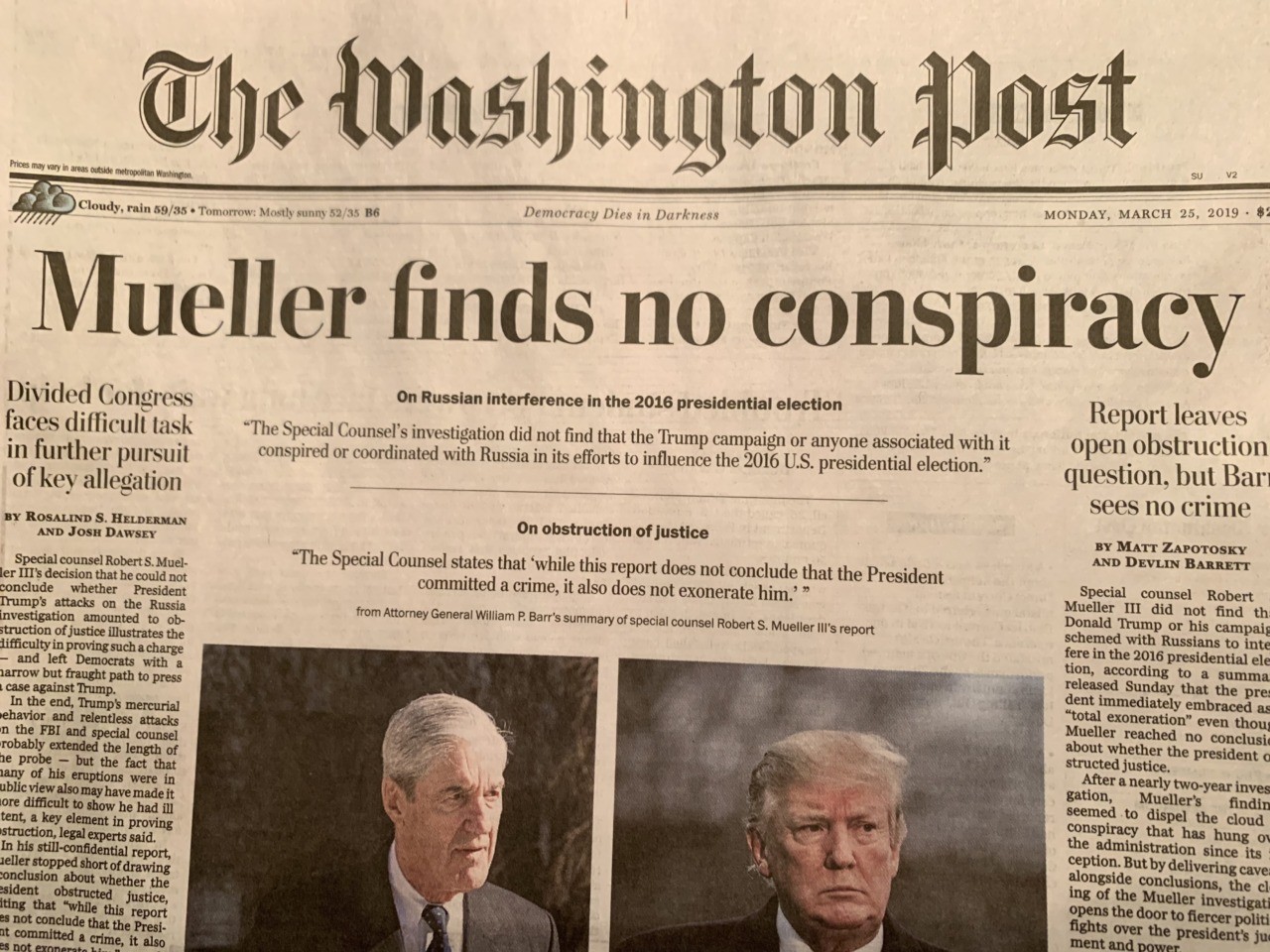 Yet dinged as the Democrats might be, the Main Stream Media has suffered more enduring damage.  In the glum words of The Washington Post’s Paul Farhi, “Now comes the reckoning for the mainstream news media and the pundits.”  Describing the summary of the Mueller report released by Attorney General William Barr, Farhi added:

Barr’s announcement was a thunderclap to mainstream news outlets and the cadre of mostly liberal-leaning commentators who have spent months emphasizing the possible-collusion narrative in opinion columns and cable TV panel discussions.

So how could the MSM get it so wrong?  One answer, of course, is that the MSM hates Donald Trump so much that it can’t see straight; in the MSM’s collective hive-mind, the image of the president’s being frogmarched out of the White House in handcuffs was so enticing that all reality was bent to serve that goal.

A second answer is that reporters tend to be slaves to their sources, and so if their sources are Democrats and Deep Statists, well, that’s what journalists will believe. And within the last two decades, we’ve seen where such credulousness can lead. In the run-up to the Iraq War, the Bush 43 administration systematically marketed—its chosen word—tales of weapons of mass destruction as a pretext for the Iraq War.  (Historians still debate whether or not the Bush people were fooling themselves as well as the American people.)

Reacting to the Mueller news, iconoclastic journo Matt Taibbi wrote, “It’s official: Russiagate is this generation’s WMD.”  Echoing the days of 2001-2003, when reporters (more like stenographers) cranked out breathless reports of aluminum tubes, yellow cake, and mobile weapons-of-mass-destruction manufacturing plants—all of which turned out to be fake news—Taibbi quoted a The New York Times reporter asking himself, “Have journalists connected too many dots that do not really add up?” Answer: Yes.

Yet there’s a third answer, too.  Namely, it’s the lure of interpretations that attach larger significance to events.  For the human mind, the desire to find a meaning, to identify a pattern, or to decrypt a code is an eternal temptation.   Thus every mystery becomes another Watergate, as crusader wannabes go questing for a Pulitzer Prize, an MSNBC gig, and maybe even a movie deal.

So once reporters are on the hunt—some would call it a feeding frenzy—then every news nugget, verified or not, is assembled into a hypothesis, or even dubbed as  “proof.”  The two-dollar phrase for this spurious process is “confirmation bias,” which means every factoid becomes a fact.

So thus we see a fake new trifecta: First, reporters and their allies hate Trump; second, they over-trust their sources; and third, they have such a strong reason to believe that they end up as dupes, playing unwitting roles in a conspiracy theory.

Indeed, as we think about the Trump/Russia story, we can think back to the JFK-related conspiratorialism of Lane, Garrison, and Stone.

To be sure, the Russia story is far from over.  The New York Times headline on March 24 showed that the Gray Lady is not giving up the fight: “Mueller Finds No Trump-Russia Conspiracy, but Stops Short of Exonerating President on Obstruction.”  And another Times header on March 25 added, “Mueller’s Done, but Trump Still Faces the Law.”

Indeed, other articles in the Times went further, offering cheer to its liberal readership, by highlighting all the trouble Trump could have with U.S. Attorneys around the country, starting with the Southern District of New York.  And there are any number of other prosecutors and investigators—to say nothing of “collusion truthers“—out there, all as determined as ever.

So, yes, there are, indeed, plenty of loose threads to be gathered up—including on the other side.  For instance, there’s the question of who played what role in fomenting the whole Mueller investigation in the first place—and before that, the investigation led by James Comey when he was FBI director. Anyone following the story is familiar with the names of not only Comey, but also of Andrew McCabe, Lisa Page, Peter Strozk, and Bruce and Nellie Ohr. All of these figures worked in or around the Justice Department, and all of them seem to have played some role in moving the “dodgy dossier” of Christopher Steele and the oppo shop of Fusion GPS around Washington, DC.

So let’s recap: an unverified opposition-research document (reportedly financed first by Trump’s Republican primary opponents, and then financed further by general-election-minded Democrats) was transformed into source-material for a serious governmental investigation spanning two years and costing taxpayers millions of dollars. So how, exactly, did that happen? Who else helped? Particulars, please, under oath. 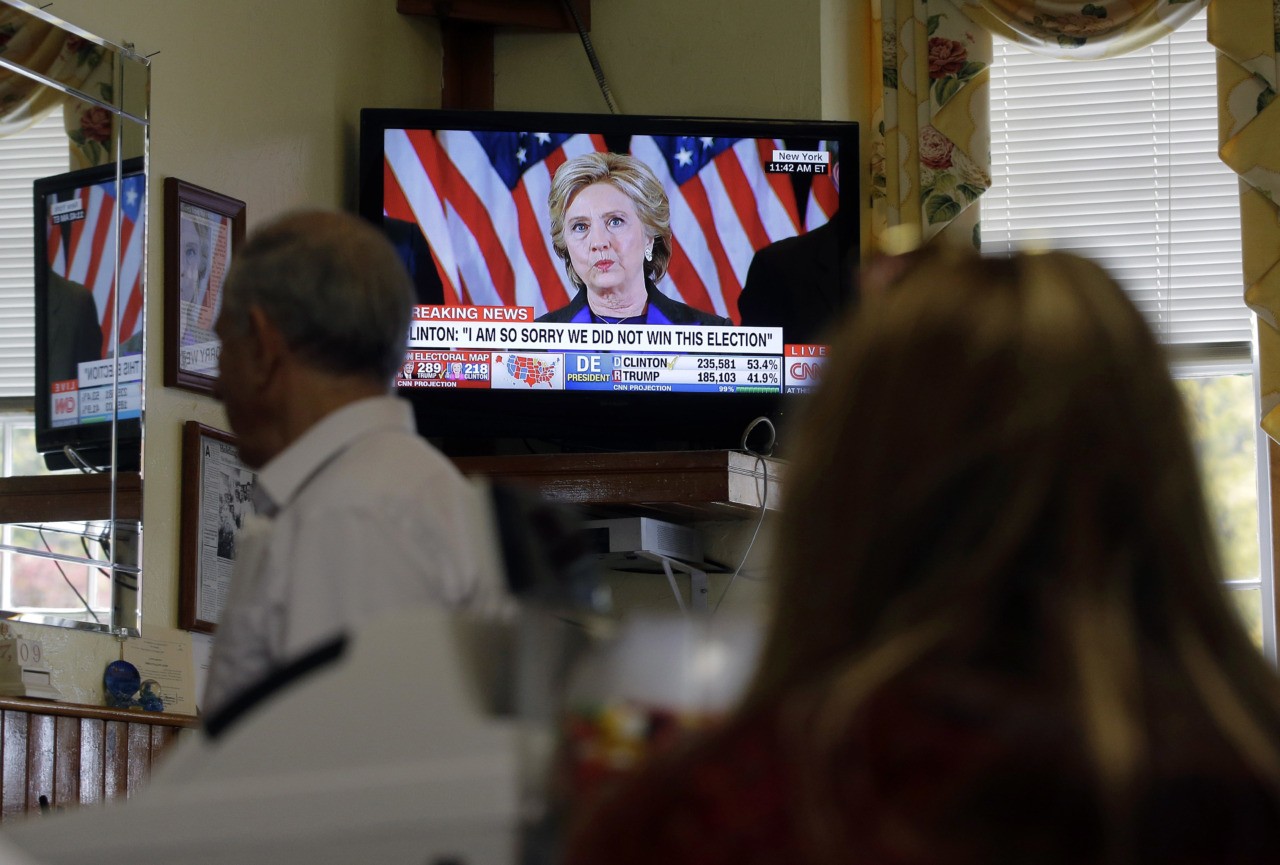 Intriguingly, the prime mover of it all seems to have been … Hillary Clinton.  That assertion is no right-wing fantasy, but rather the considered reportage of MSM journalists Jonathan Allen and Amie Parnes, who two years ago co-authored Shattered: Inside Hillary Clinton’s Doomed Campaign.  While the book mostly, of course, focuses on the Clinton campaign, it also included some telling post-election details, which were caught, at the time, by Breitbart News:

The authors detail how Clinton went out of her way to pass blame for her stunning loss on “Comey and Russia.”  “She wants to make sure all these narratives get spun the right way,” a longtime Clinton confidant is quoted as saying. [emphasis added]

That strategy had been set within twenty-four hours of her concession speech.  [Campaign manager Robbie] Mook and [campaign chairman John] Podesta assembled her communications team at the Brooklyn headquarters to engineer the case that the election wasn’t entirely on the up-and-up.  For a couple of hours, with Shake Shack containers littering the room, they went over the script they would pitch to the press and the public.  Already, Russian hacking was the centerpiece of the argument.

So how much of that history will be dredged up again?  A lot depends on the ability of the Senate Judiciary Committee, chaired by Lindsey Graham of South Carolina, to really get to dredging.  (Graham has it in his power, of course, to subpoena any and all witnesses, including Hillary Clinton.)

So we can see: Given all the twists and turns of the last two years, it would be foolish to seek any secure conclusion about the next two years.  Trump’s enemies may have suffered a body blow, but they have not given up, and they are not without considerable resources.  After all, as we have seen, there’s nothing more energizing than a good conspiracy theory, and the facts—or lack thereof—never seem to get in the way.