Brian Stelter’s CNN show, Reliable Sources, has lost more than 40 percent of its viewers since the beginning of the year.

Stelter, a left-wing conspiracy theorist who serves as a reactionary mouthpiece for his boss, Jeff Zucker, the far-left extremist responsible for running CNN into the ratings dirt, was at least able to average 967,000 viewers during the first four weeks of this year, from January 6 to January 27.

But during the four weeks that just passed —  from June 16 to July 7 — Reliable Sources has only been able to average 557,000 viewers.

According to my public school math, that represents a whopping 42 percent collapse in total viewers.

Now, to be as fair as possible, we need to look at the numbers for Stelter’s competition over at Fox News — and that would be Howard Kurtz’s MediaBuzz.

Like Reliable Sources, Fox’s MediaBuzz is an hour-long weekend show that looks at the news media. Both air opposite the other on Sunday mornings at 11 a.m. Eastern, so you aren’t going to get a better comparison than that.

After all, the problem might not be Stelter and his lies and his non-stop conspiracy theories and his pompous leftism and his hypocrisy and his downplaying of political violence against the right and his manic obsession to convince everyone to hate Fox News as much as he hates Fox News, as though Fox News were his ex-wife whom he caught sleeping with his brother…

What I mean is that Stelter’s ratings problem might be due to an overall decline in Sunday cable news viewers or a waning interest in news about the news media, except…

No… The problem is definitely Tater.

During these last four weeks, between June 16 and July 7, MediaBuzz averaged more than twice as many viewers as Reliable Sources: 1.135 million compared to Stelter’s pathetic 557,000.

What’s more, during the first four weeks of the year, MediaBuzz averaged 1.372 million, which means MediaBuzz has only lost a negligible five percent of its viewers since the beginning of the year, which is a whole lot less than Stelter’s breathtaking 42 percent.

If Reliable Sources has lost a whopping 42 percent of its viewers since the beginning of the year, and MediaBuzz has lost only five percent, that tells you the problem is not an overall loss of interest in news about the news media, but a problem with Stelter and his horrible show.

Using these same numbers @RoadMN, the self-described “indefatigable tweeter of cable news ratings and cable news” tweeted out these helpful charts (which originally alerted me to Stelter’s ratings collapse): 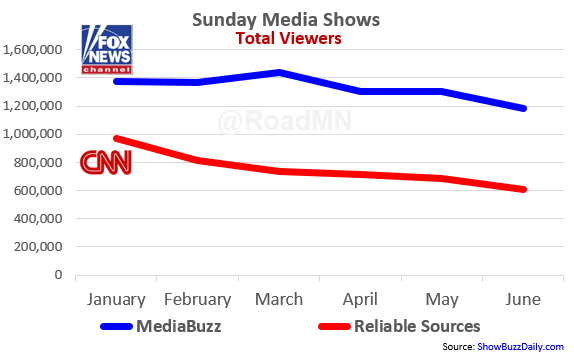 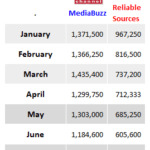 On top of the fact that he is not very bright, Stelter’s Reliable Sources has three big problems: 1) Stelter is unbelievably dishonest and, therefore, not a reliable source, 2) Stelter is a pompous windbag, always lecturing others, and 3) Stelter’s show is tired and predictable and, therefore, unbelievably boring. Every week, it’s the same guests or type of guests spewing the same anti-Fox News/anti-Trump/anti-American talking points.

Instead of being insightful, informative, interesting, or even surprising, like all propaganda, Reliable Sources is crushingly dull, one-sided, and predictable.