Group Nine Media, a partial subsidiary of Discovery, Inc., openly admits it wants to engage in the “general reprogramming of most people’s minds.”

Discovery, Inc., the multi-billion dollar powerhouse behind a whole host of cable networks, including the Discovery Channel, has a 35 percent stake in Group Nine Media, which makes Group Nine one of Discovery’s many subsidiaries.

Among other sites, Group Nine runs the animal rights site The Dodo, and Now This, a far-left news outlet aimed at millennials.

On Monday, Now This released a viral video where the outlet comes right out and admits that its goal is to reprogram our minds.

‘Hey guys’ seems innocuous, but here’s why you might want to try a different greeting pic.twitter.com/3Ep4Nmjf3d

As you can see, the video is slickly produced and edited, and premised on the obnoxiously stupid idea that addressing girls with the catch-all phrase “Hey, guys!” is — in the vernacular of the day — problematic:

“Guys” is a simple term. It can mean boys. But if you’re modern, hip, it can mean “people.” At first glance, “guys” seems inviting, friendly, maybe warm, even comedic at times. But, it, like many male default terms, should not be normalized as an all encompassing phrase — innocent as it may seem.

While we may understand the word means no real harm, with a deeper look, you’ll understand that we’ve been ignoring the cognitive impact on women, as well as gender non-conforming folks by only explicitly addressing the male-identifying individuals present.

This drivel goes on and on for nearly five interminable minutes of whining from the most privileged generation in the history of the planet.

You see, now America has delivered security, peace, and the kind of prosperity where even the poor have plasma TVs and over-eating problems, these brats desperately feel the need to embrace a cause, so they have embraced the brave and noble cause of crusading against using the word “guys.”

This is my favorite part:

Of course, we claim it’s colloquial, but with our elevated knowledge and inclusive perspective, it just seems lazy, inconsiderate, and a small part of what reinforces the gender hierarchy today.

Yep, feminism has gone from Rosie the Riveter to melting down into a pool of little-girl tears over the word “guys.”

And while it’s easy to laugh at these joyless, uptight neurotics, this part is not funny —  especially when you are reminded that a multi-billion dollar media corporation stands behind it:

There are larger issues that we, the feminists, need to combat: reproductive rights, rape culture, violence against women, LGBTQ rights, and the general reprogramming of most people’s minds when it comes to the valuation of women in society.

Again, what we are talking about here is a slickly-produced, carefully written piece of propaganda backed by a billion dollar media corporation, so the words used are deliberate. The young lady narrating the piece is not ad-libbing. She’s reading from a script. They’ve even got subtitles, so you can show your friends this mask-slip moment without forcing them to waste two minutes of their lives: 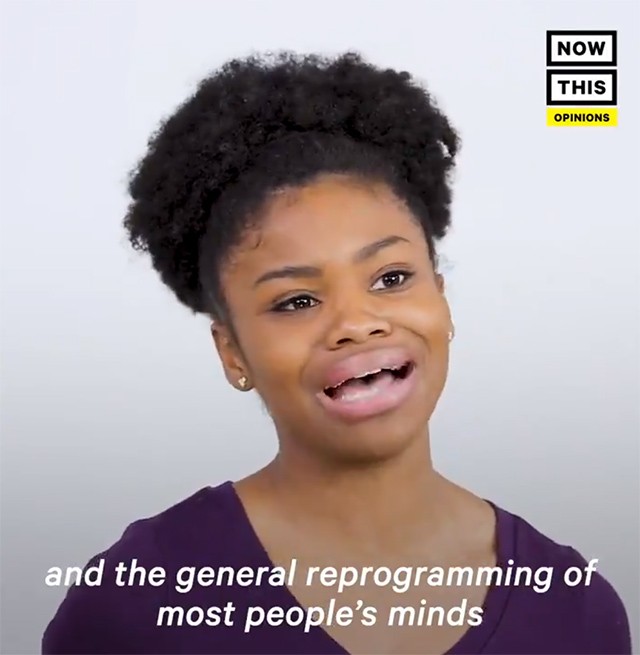 So why come out and admit to wanting to reprogram our minds…? Why say that rather than something like, “Convince people to see our point of view”?

Well, the answer is simple…

Don’t laugh this off. Fifteen years ago, we were laughing at the idea of same-sex marriage, now our public libraries host drag queen story hours for little kids and mentally-ill men wearing women’s clothes are sharing a bathroom with our daughters.