Nikole Hannah-Jones, the creator of the New York Times’ now–debunked “1619 Project” said she would consider it an “honor” if all the devastating riots over the past few weeks were remembered as the “1619 Riots.”

This tweet was up for two days before she deleted it Monday morning.

Without any prompting, Hannah-Jones was remarking on a New York Post opinion piece titled “Call Them the 1619 Riots.”

The premise of the Post piece is left-wing institutions, like the New York Times and its debunked “1619 Project” and the public schools embracing the debunked “1619 Project,” are deliberately creating a generation of angry, violent, embittered young people who have been led astray by the lie that America was founded on the idea of slavery in 1619, and the Revolutionary War was fought to protect slavery and not the ideals of individual liberty.

A sane person, a decent person would be outraged over her most famous and defining (and debunked) work being blamed for weeks and weeks of mayhem and violence — violence that not only resulted in the deaths of a number of black people, but the ruination of predominantly black neighborhoods all throughout the country. Countless black businesses have been burned out and destroyed. Countless black jobs went up in smoke. And the damage will last generations. There are parts of Watts and Detroit that have still not recovered from their respective riots in 1965 and 1967.

And yet, here is Hannah-Jones, publicly embracing these riots and saying out loud she would be “honored” to have been the cause of all this death, destruction, and despair. There is no other way to interpret her tweet.

This is how far gone the left is…

This is how truly dangerous the establishment media now are… This isn’t some fringe figure on the left screaming Burn, baby burn, this isn’t Bernadine Dohrn or Louis Farrakhan embracing a role in all this violence and criminality, all this murder and destruction… This is a high-profile New York Times staffer, a Pulitzer winner…

This is incredibly irresponsible on every level. pic.twitter.com/hFSmxe8HtA

But what else should we expect from someone who blames Atlanta’s traffic problems on slavery. That’s not a joke.

What else should we expect from someone who describes looting as “symbolic” restitution.

What else should we expect from someone who is comfortable saying, “Destroying property, which can be replaced, is not violence.”

What else should we expect from a malicious propagandist whose warped thinking and dangerous embrace of criminality has been mainstreamed by the “mainstream” media?

My favorite part of Hannah-Jones’ very revealing tweet-a-thon this weekend came when she shut down someone who complained about the lack of American Indian representation. “Did you know Native people brought the enslaved black people they owned on the Trail of Tears,” Hannah-Jones shot back…. 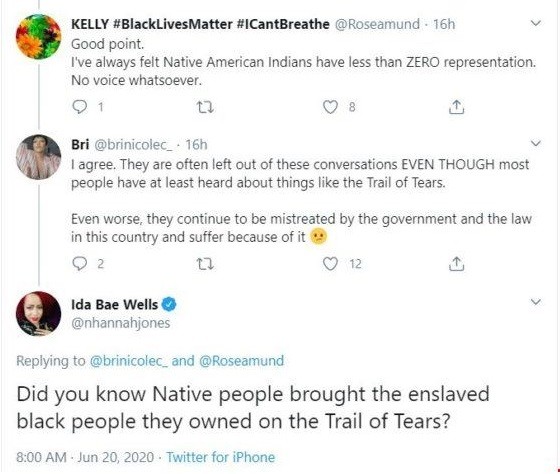 Who wants to tell her…?