Limbaugh’s remarks came in response to a caller named Lisa from State College, Pennsylvania, a self-described Trump supporter, who worried the president’s communications lacked clarity. Lisa expressed concern over what she described as a lack of precision in Trump’s “flow of consciousness” extemporaneous speaking.

Lisa said, “[Trump] is not a politician, which is what I like about him, but also what sometimes can get him in trouble. I think maybe he needs to speak more in bullet points, and talk more about what he’s done, [like] school choice, criminal justice reform. His ads aren’t targeting that, either.”

Limbaugh cited a Breitbart News report on Hudson’s book as an example of how Trump can share information of his accomplishments with the public.

One thing that I do tend to understand what you’re saying, and to a point agree with is that he’s got one helluva success story to tell, and I think he should spend more time on it. For example — I know you’re gonna love this, Lisa — there is a story today at Breitbart News [about] a book by a Breitbart reporter — who’s black, by the way, his name is Jerome Hudson — ‘ 50 Things They Don’t Want You to Know About Trump: HarperCollins Reveals Breitbart Editor Jerome Hudson’s Book Cover,’ and here are some of them, and these are the things you’re talking about. These are things you wish that [Trump] would highlight.

Limbaugh shared a bullet-point list identifying some of the president’s accomplishments, composed by Hudson:

Limbaugh added, “It’s true that Americans haven’t been told the whole story about his presidency, but they’re not going to be unless he does it.” 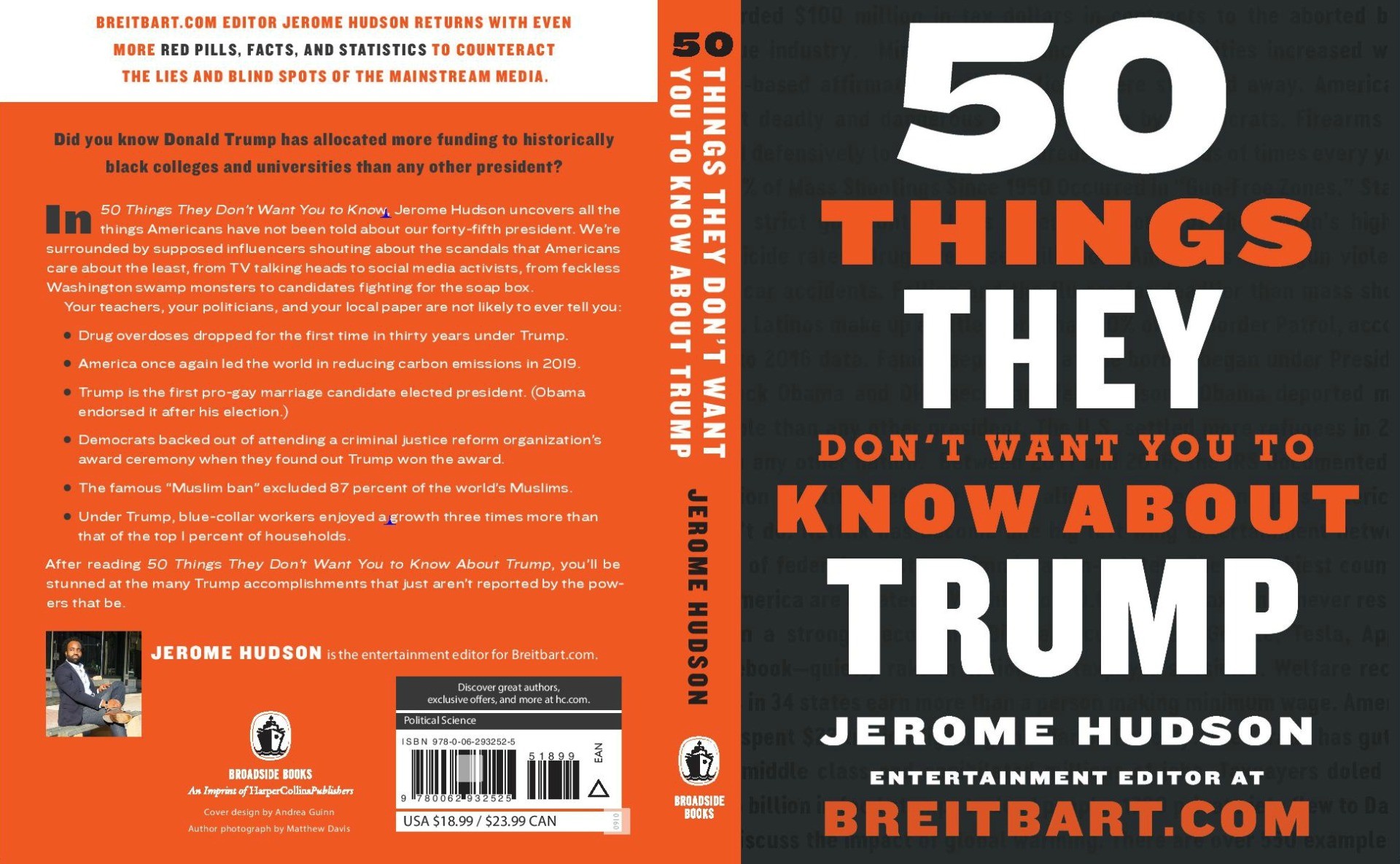 Hudson described his upcoming book as a standalone book and objective assessment of Trump’s accomplishments as president. “It is just a book that really sort of sets the record straight,” he said, noting widespread mendacity across the news media industry.

“The truth is I am incredibly blessed,” added Hudson. “I am incredibly blessed to have been born into a home with two very loving parents. My dad — I saw very early on, his military service — he was a drill instructor, and that’s how I was raised, [including] my mother’s commitment to work. I’ve had opportunity after opportunity, and the good Lord has placed amazing people in my life.”

Hudson went on, “I’ve gotten tremendous mentorship over the years and I’ve taken advantage of every opportunity that has been placed before me, and it’s really led me to the point in which I’m talking to you tonight. I am forever grateful and humbled by everything that has occurred in my life, the good and the bad. It’s shaped me. It’s built character in me, and I’m just endlessly and ceaselessly amazed by my colleagues at Breitbart News.”

Hudson praised his Breitbart News colleagues as “great patriots I am blessed to work with.”