Democrat lawyer Marc Elias, one of the main players behind the “Russia collusion” hoax in the 2016 election, called for the freedom of the press to be curtailed in response to a New York Times article allegedly exposing his “dark money” sources.

In a tweet that he later deleted, Elias said: “If the media is not going to be pro-democracy, then it probably is time for the courts to revisit New York Times v Sullivan (as conservative lawyers suggest). The case was premised on a role in democracy that the main stream press seems increasingly disinterested in playing.” 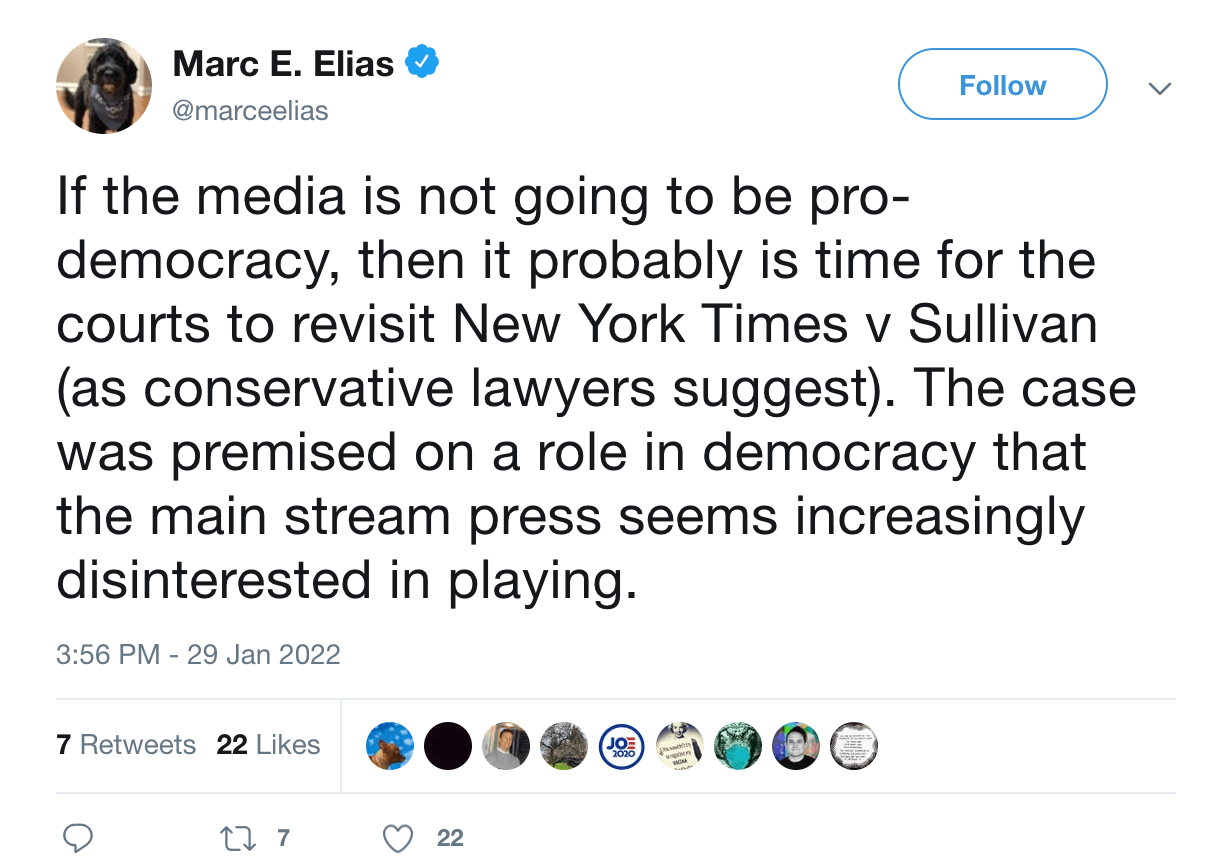 Elias was referring to a case that requires public figures to prove “actual malice” in defamation lawsuits, which means they cannot prevail if an article is merely wrong.

Some conservatives have indeed challenged the standard, but Elias appeared to be angered by the fact that the Times reported on his funding at all, rather than challenging the information in the article.

On Saturday, the Times reported that Democrats had outspent Republicans by 66% in terms of “dark money” in the 2020 election cycle, despite complaining for a decade about such funding. The article also identified Elias’s alleged funding:

In weighing which nonprofits to include in its analysis, The Times considered both their spending on politically oriented efforts, as well as their relationships with allied groups. Some major institutions, such as the National Rifle Association and the Sierra Club, are involved in politics but were excluded because they spent heavily on membership-oriented activities.

The analysis includes three of the five Arabella-administered nonprofits, among them one charity, the Hopewell Fund.

Hopewell also sponsored a project called Democracy Docket Legal Fund that filed lawsuits to block Republican-backed voting restrictions enacted across the country. It was led by a top Democratic Party election lawyer, Marc E. Elias. His firm at the time, Perkins Coie, was paid $9.6 million by Hopewell, according to tax returns, and another $11.6 million by the Biden-backing Priorities USA nonprofit group.

Criticism poured in on Sunday for Elias’s apparent stance against the free press in the supposed name of “democracy”:

Striking. Democratic lawyer, father of notorious dossier dirty trick, is angry about NYT story on Democrats' dark money. So angry he says it's time to 'revisit' protections of freedom of the press.https://t.co/UyOgm6kj3l

He later deleted his original tweets on the topic:

I have deleted the original tweets to spare those receiving hate and vitriol as a result from a ruined Sunday.

I’m now back to my day job of fighing for voting rights.

However, he retained his tweets attacking the Times for supposedly covering “both sides” of the story about lawsuits over voting rules and election outcomes.

Elias, who styles himself as a defender of democracy, but he was reportedly involved in funding Fusion GPS, the opposition research firm that created the fraudulent Russia “dossier” on Trump that fueled efforts to overturn the 2016 election. He is known for attempting to overturn close elections in Democrats’ favor — even claiming, in 2020, that there were faulty voting machines in a congressional race, a claim that Democrats ridiculed when made by President Donald Trump about his race.

He also sued a large number of states during the 2020 election in an attempt to change voting rules — often successfully — and defended Democrats’ victories in many states where Trump and the Republicans sought to challenge the results.