Prominent Jesuit Father Thomas Reese has taken to Twitter to promote the national kick-off of Catholics for Biden, a “grassroots” group promoting the Democrat ticket in November.

The event aims to help participants “engage Catholic voters” and whip up enthusiasm for the Biden-Harris ticket. 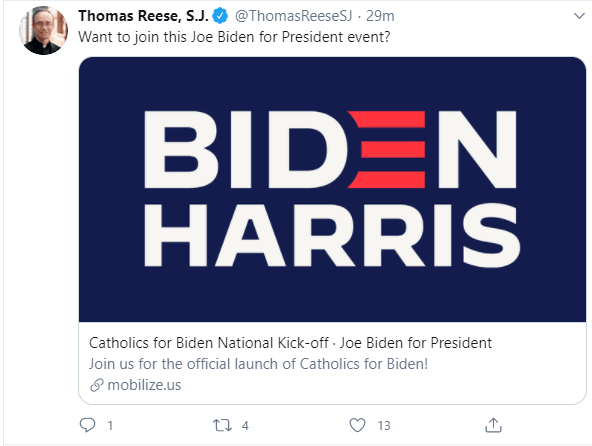 Father Thomas Reese invitation to kick-off of Catholics for Biden.

Last Thursday, Father Reese published an essay insisting that it is acceptable for Catholics to vote for Catholic candidates who openly support abortion on demand.

The former editor-in-chief of America magazine declared that “a Catholic Democrat can vote for Biden, even if his policies promote abortions and gay marriage, as long as the voter’s intent is not to support those positions.”

“A Catholic Democrat might feel impelled to vote for Biden despite his position on abortion and gay marriage because of other morally grave reasons, for example, his positions on racism, immigration, global warming and COVID-19,” Reese argued.

Father Reese confessed that “most Catholic Democrats agree with Biden that abortion should be legal” anyway, which removes any moral obstacle for supporting him.

In their teaching document on the political responsibility of Catholics called Faithful Citizenship, the U.S. bishops underscore the gravity of abortion, which they describe as the “preeminent” issue for Catholic voters.

“The threat of abortion remains our preeminent priority because it directly attacks life itself, because it takes place within the sanctuary of the family, and because of the number of lives destroyed,” the bishops declare.

Last week, Boston Cardinal Sean O’Malley issued a statement reiterating the Catholic Church’s position on abortion after one of his priests came out as pro-choice on Facebook this week.

In his statement, O’Malley said that the Catholic community “has the right to expect the priests of the Archdiocese and those entrusted with handing on the faith to be clear and unequivocal on the Church’s teaching concerning respect and protection for life from the first moment of conception to natural death.”

“This teaching is of the highest priority for the Church,” he added.

The Catechism of the Catholic Church states: “From the first moment of his existence, a human being must be recognized as having the rights of a person — among which is the inviolable right of every innocent being to life.”

Throughout his campaign, Joe Biden has reiterated his support for abortion on demand and has promised to work to repeal the Hyde and Helms Amendments that protect taxpayers from having to finance abortions.

Last June, Democrat candidate Joe Biden appeared in a Planned Parenthood advertisement promising to do “everything in [his] power” to defend abortion rights.

Mr. Biden’s overt support for abortion has led several bishops to publicly question his standing as a Roman Catholic.

The Catholic News Agency (CNA) ran an article demonstrating that the Democratic platform for the upcoming elections runs counter to Catholic teaching on virtually every point.