The bombing came as the nation’s federal government continues to resist international pressure for mediation in a war with the Marxist separatist Tigray People’s Liberation Front (TPLF).

TPLF leader Debretsion Gebremichael told Reuters that the bombing killed two civilians and wounded a number of others, but no independent sources could confirm his claims.

Ethiopian Prime Minister Abiy Ahmed (pictured above, center) ordered his country’s military to conduct airstrikes on and launch a ground offensive against Tigray’s local rulers on November 4 for defying his authority. The Nobel Peace Prize recipient accused the TPLF of “crossing the last red line” after an attack on a government military camp,” the East African reported on November 15.

“Under the TPLF, millions of Ethiopian men and women had suffered widespread political repercussions, economic as well as social marginalization for two decades,” Abiy said on November 11, adding that the TPLF allegedly trained “banned armed militia to target civilians.” 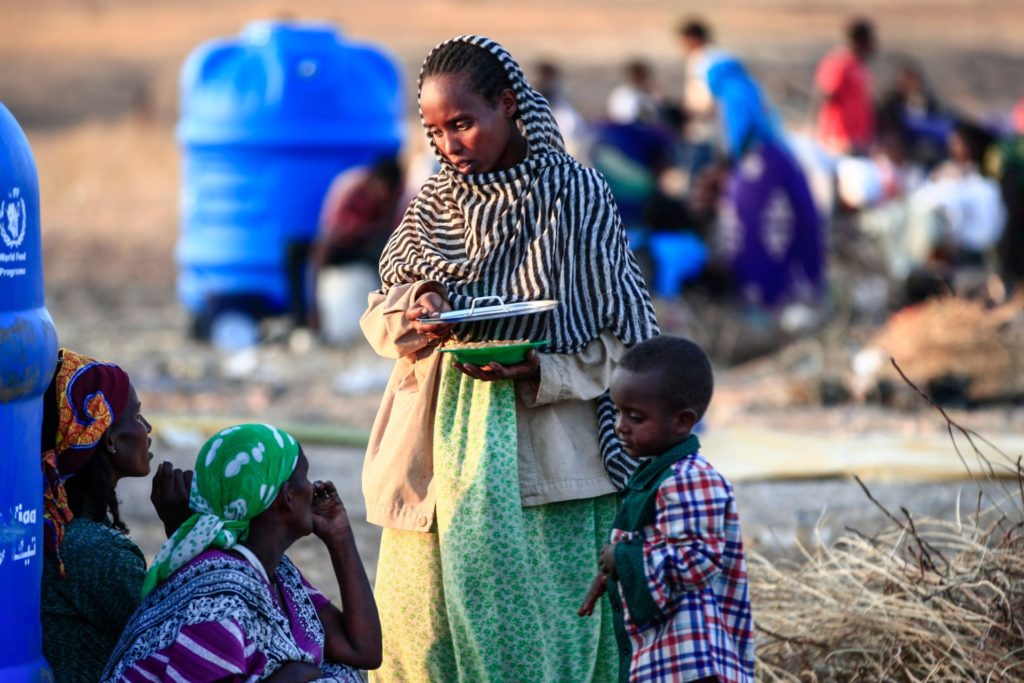 An Ethiopian refugee who fled intense fighting in their homeland of Tigray, speaks to a fellow refugee at the border reception centre of Hamdiyet, in the eastern Sudanese state of Kasala, on November 14, 2020. – Ethiopia’s Prime Minister Abiy Ahmed, winner of last year’s Nobel Peace Prize, ordered military operations in Tigray last week, shocking the international community which fears the start of a long and bloody civil war. (EBRAHIM HAMID/AFP via Getty Images)

“Such a cruelty cannot be addressed or redressed by sitting at a table for negotiation. Negotiation makes sense only when there is good faith and desire for peace,” the prime minister argued.

Since the conflict began in early November, hundreds have been killed and roughly 25,000 refugees have fled to Sudan to escape the fighting. Amnesty International reported on November 12 that “likely hundreds” of civilians were “hacked to death” in a massacre allegedly perpetrated by forces tied to the TPLF on November 9 in the Tigray town of May Cadera.

“We are saying ‘Give us time.’ It’s not going to take until eternity … it will be a short-lived operation,” Redwan Hussein, spokesman for the Ethiopian government’s Tigray crisis task force, told reporters on Monday.

TPLF leader Gebremichael told Reuters in a text message on Monday that “while Mekelle had been bombed, the town of Alamata in southern Tigray had been hit by a drone attack.” Ethiopia’s Tigray crisis task force earlier alluded to this possible attack on Alamata, saying that federal troops had “liberated” the town from the TPLF.

The conflict threatens to spill over into neighboring Eritrea and destabilize the wider Horn of Africa region. Prime Minister Abiy, 44, won his Nobel Peace Prize in 2019 for pursuing peace with neighbor Eritrea. Like the Ethiopian federal government, Eritrea opposes the TPLF.

“Eritrea’s support, tacit or active, for Abiy’s efforts to crush Tigray means the region will be cut off from outside supply if its contacts with Sudan or Djibouti are severed. Hence the Ethiopian Army’s efforts to secure the Sudan border, across which thousands of refugees are fleeing, as well as Tigray’s airports,” African Arguments reported on November 13.

The TPLF has accused Eritrea of supporting the Ethiopian federal military with tanks and troops in its fight against Tigray. Eritrea denies the claims. TPLF forces reportedly fired rockets into Eritrea over the weekend.