A Rwandan court on Monday sentenced Paul Rusesabagina — portrayed in the 2004 film Hotel Rwanda — to 25 years in prison on charges of terrorism.

“Rusesabagina … is convicted of being a member of a terror group and participating in terror activities but he is acquitted of creating an illegal armed group,” judge Antoine Muhima said on September 20.

Rusesabagina is a leading member of the Rwanda Movement for Democratic Change (MRCD), a group opposed to Rwandan President Paul Kagame’s rule. Judges in Rusesabagina’s case said the MRCD is indistinguishable from the group’s armed wing, known as the National Liberation Front (FLN), and officially referred to the organization as the “MRCD-FLN.” Rusesabagina acknowledged his role in the MRCD’s leadership “but denied responsibility for violence” committed by the FLN, according to Reuters.

The 2004 U.S. film Hotel Rwanda, set during the 100-day Rwandan genocide of 1994, portrays Rusesabagina as a hotel manager who helps hundreds of people seeking shelter during the conflict in the national capital, Kigali. The genocide saw Hutu ethnic extremists slaughter over 800,000 ethnic Tutsis and moderate Hutus starting in April 1994. Some survivors of the Rwandan genocide have questioned the accuracy of the version of events presented in the 2004 Hollywood movie, which specifically claims that Rusesabagina provided sanctuary for more than 1,200 people in Kigali’s Hotel des Mille Collines. 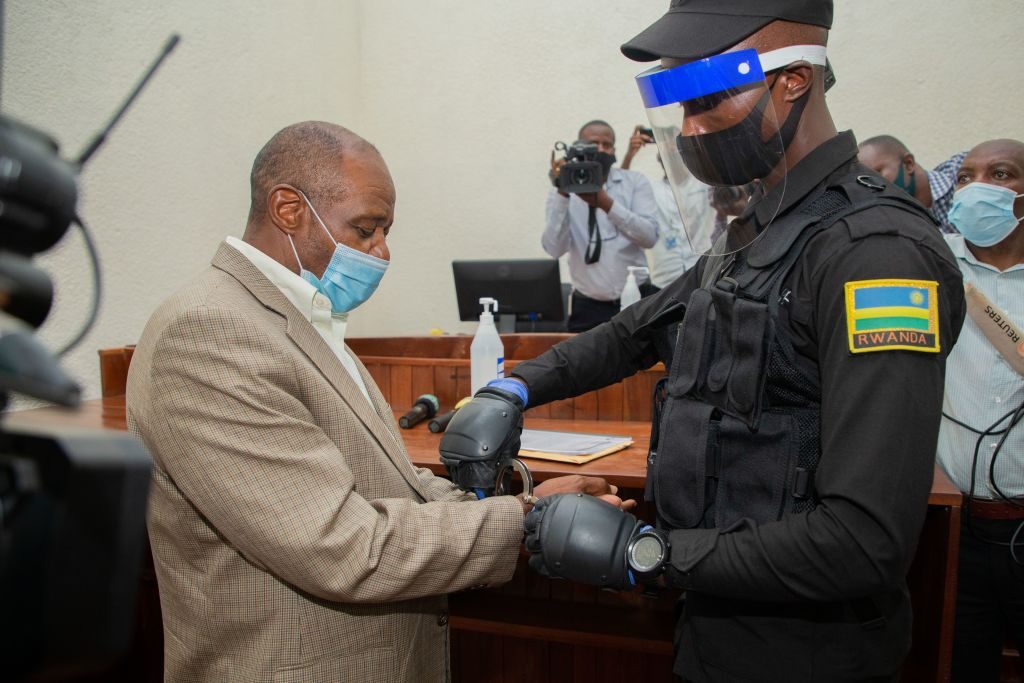 “Hotel Rwanda” hero Paul Rusesabagina (C) is handcuffed by a police officer after his pre-trial court session at the Kicukiro Primary court in Kigali, Rwanda, on September 14, 2020. (STRINGER/AFP via Getty Images)

Dozens of survivors of the 1994 Rwandan genocide protested Rusesabagina receiving a local humanitarian award in Concord, New Hampshire, in 2011, telling the Concord Monitor the hotelier “did not save lives and even denies the genocide of the Tutsi people.”

The organizer of the protest, Gerard Sefuku, told the newspaper “his father and siblings were killed in the conflict,” and claimed Rusesabagina “minimizes the genocide by saying both Tutsi and Hutu people died.”

“Everywhere he goes, he claims Rwanda didn’t go through a genocide, it went through a war,” Sefuku said.

“[P]eople survived in the hotel because it was under the protection of the United Nations, not because of the actions of its manager,” he told the Concord Monitor.

“He dramatized his deeds in a film and won awards he did not deserve,” Ahishakiye said.

Rusesabagina came from a Hutu father and Tutsi mother and later married a Tutsi woman. He gained Belgium citizenship in the years after the 1994 genocide and lived in exile in the U.S. until last year when the Rwandan government successfully lured him to Kigali. State prosecutors subsequently charged and tried Rusesabagina for his alleged terrorist activities. 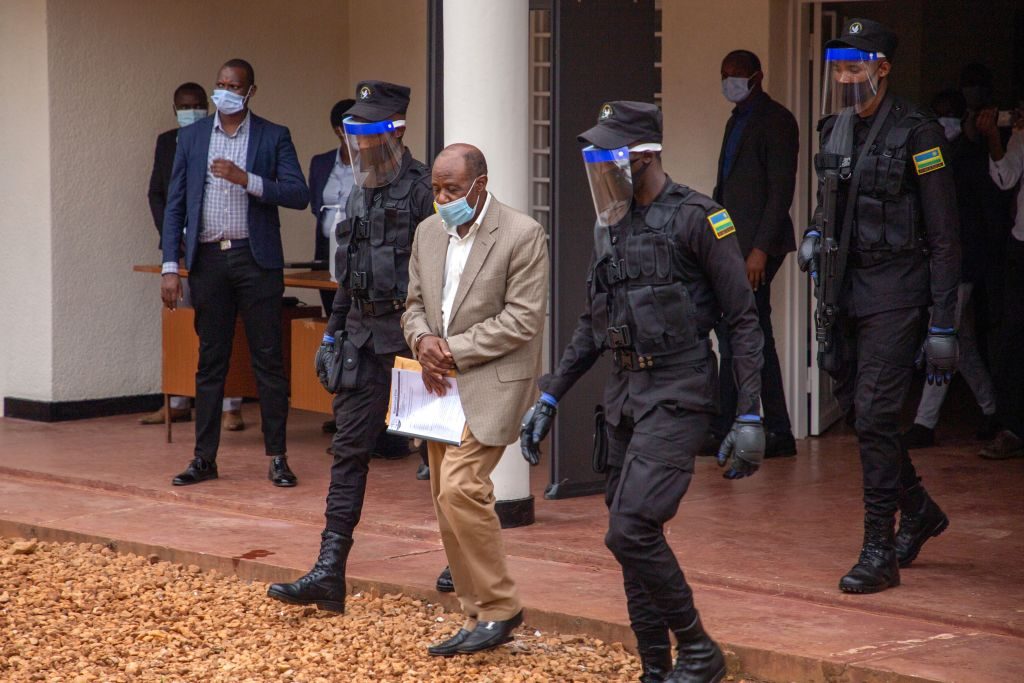 “Hotel Rwanda” hero Paul Rusesabagina (C) is escorted by police officers to leave after his pre-trial court session at the Kicukiro Primary court in Kigali, Rwanda, on September 14, 2020. (STRINGER/AFP via Getty Images)

Rusesabagina “called for armed resistance,” in a video posted to YouTube in 2018, according to Reuters. The opposition leader claimed change in Rwanda’s government “could not be achieved by democratic means.” He referred to the government of Paul Kagame, who had recently won reelection to Rwanda’s presidency with 99 percent of the vote in 2017.

Kagame is a former Tutsi rebel commander who rose to power after his forces helped stop the Rwandan genocide of 1994 by capturing Kigali.

Rusesabagina refused to participate in the trial against him beyond its first few hearings, which began in February. He has vehemently denied all charges against him.