The group’s report is “totally outdated and was based on a 2019 country evaluation report which is stale and irrelevant today,” NFIU Chief Media Analyst Ahmed Dikko said on Monday. Dikko claimed the Nigerian government’s counterterrorism financing efforts have evolved since 2019.

“The funding of violence from all sections of the country is being analyzed and reported to all relevant authorities according to law,” he added.

Nigeria’s Central Bank oversees the NFIU, which serves as the central coordinating body for Nigeria’s “Anti-Money Laundering, Counter-Terrorist Financing and Counter-Proliferation Financing activities,” according to the Abuja-based news site HumAngle.

Nigeria’s Financial Intelligence Unit (NFIU) on Monday disputed a report published by ECOWAS alleging the movement of billions of naira in terror funding through the country’s financial system.https://t.co/8wIgtJrdJG

Boko Haram is a jihadist terror group that emerged in northeastern Nigeria in 2009 and has waged an Islamist insurgency across the region in the decade-plus since then. The group aims to establish an Islamic caliphate in West Africa and has expanded its reach beyond northeastern Nigeria to the neighboring Lake Chad region accordingly, specifically to Chad, Cameroon, and Niger. Boko Haram’s insurgency has killed roughly 350,000 residents of the Lake Chad region since 2009 and displaced an additional three million people. The group’s regular attacks have displaced an estimated 310,000 people within Nigeria alone. 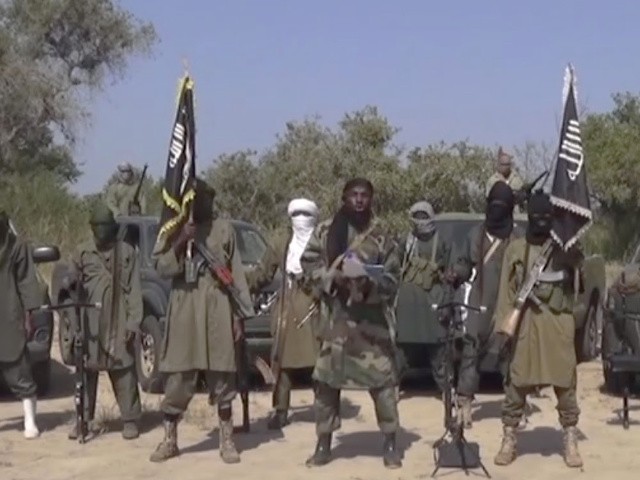 This Friday Oct. 31, 2014 image taken from video by Nigeria’s Boko Haram terrorist network, the leader of Nigeria’s Islamic extremist group Boko Haram, center, has denied agreeing to any cease-fire with the government and said Friday more than 200 kidnapped schoolgirls all have converted to Islam and been married off. (AP Photo)

Boko Haram renamed itself ISWAP in 2015 and pledged allegiance to now-dead ISIS “caliph” Abu Bakr al-Baghdadi. The Nigerian government has repeatedly claimed that the two are separate organizations and that the current iteration of Boko Haram is as a group of jihadists who disagreed with the decision to become an affiliate of the Islamic State. Abuja has also repeatedly claimed to have defeated Boko Haram and justified the claim by blaming Sunni jihadist attacks in Boko Haram’s home state of Borno on “ISWAP” as a separate entity.

Boko Haram allegedly confirmed the death of its leader, Abubakar Shekau, in June.

ISWAP killed four members of the Nigerian Army, including an officer, after the terror group attacked the Borno State town of Askira “with at least 12 gun trucks, burning houses, shops and a school and forcing some residents to flee,” according to Reuters.

The Nigeran Army sent troops to Askira in an attempt to defend the town but ultimately failed to curtail the attack. Nigeria’s military suffered casualties during the operation.

“Security sources said ISWAP fighters had also separately attacked troops near Maiduguri town, but there were no immediate details on casualties,” Reuters revealed on November 14. Maiduguri is Borno state’s capital and largest city.

“Nigeria’s army said last month it had killed the new ISWAP leader in a military operation, weeks after announcing the death of the group’s former head Abu Musab al-Barnawi,” the news agency recalled at the time.