Al-Shabaab, a Somali group linked to al-Qaida, released a brief statement on its Radio Andalus claiming responsibility for the attack, which occurred outside Mogadishu’s international airport, asserting it was targeting “white officials.”

Witnesses said the target of the attack appeared to be a passing U.N. convoy heading toward the heavily fortified airport, but the U.N. said it had no personnel in the convoy.

“I saw some of the passengers injured and being carried after the blast,” said one witness, Osman Hassan.

“The blast was so huge that it has destroyed most of the buildings nearby the road and vehicles passing by the area,” said Hassan Nur, another witness. “I saw several dead and wounded people strewn in the road.” 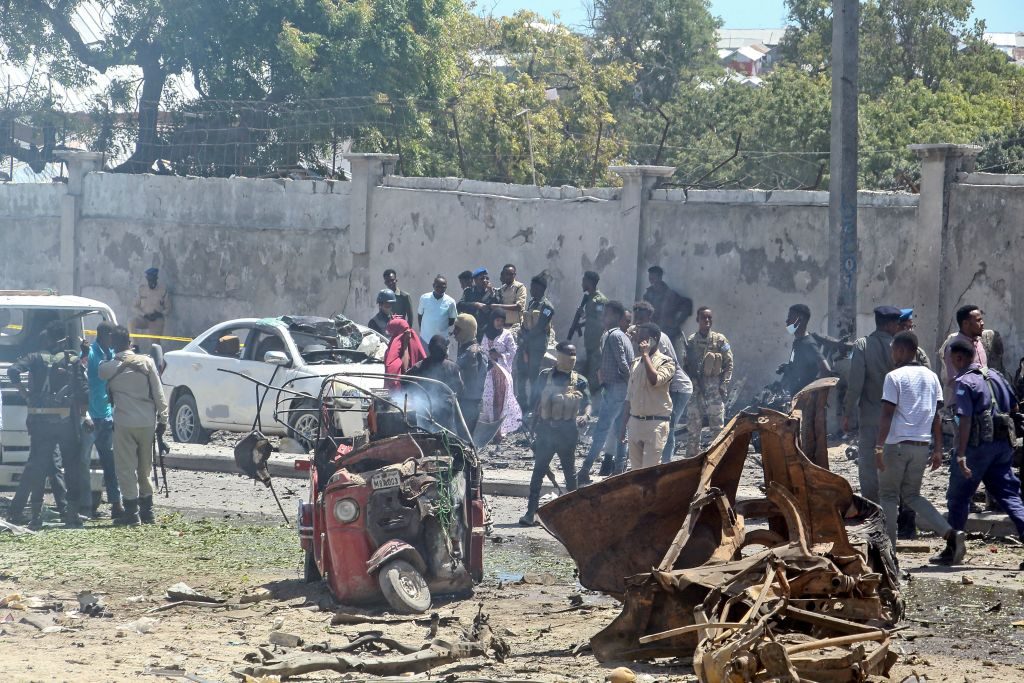 A general view of the scene of a car-bomb explosion in Mogadishu on January 12, 2022 where at least six people were killed and several others wounded in the huge blast that caused devastation in the area along the 21st October road. (AFP via Getty Images)

The blast occurred in period of political unrest and insecurity, just days after Somali leaders had agreed on a new timetable for long-delayed elections.

President Mohamed Abdullahi Mohamed, known as Farmajo, and his Prime Minister Mohamed Hussein Roble have been engaged in a harsh power struggle but leaders finally announced Sunday that parliamentary polls will be concluded by February 25, more than a year behind schedule.

The Somali government condemned the “cowardly” suicide attack in a statement on Twitter.

“Such acts of terrorism will not derail the peace & the ongoing development in the country. We must unite in the fight against terrorism,” it said.

“The United States is prepared to draw on relevant tools, potentially including visa restrictions, to respond to further delays or actions that undermine the integrity of the process,” said U.S. State Department spokesman Ned Price following Wednesday’s attack.