The government of Prime Minister Abiy Ahmed, an ethnic Oromo, has launched an aerial assault on Tigray, where the ethnic Tigray minority lives, in response to attacks last year by the Tigray People’s Liberation Front (TPLF), a Marxist former ruling political party now deemed a terrorist organization. When in power, the TPLF appointed Tedros, an ethnic Tigray, its foreign affairs and health minister at different times during its tenure.

The Oromo are the largest ethnic group in Ethiopia, but the Tigray minority largely controlled the federal government for nearly 30 years prior to Abiy’s arrival.

Prior to launching a war in which his government stands accused of widespread human rights violations against civilians, Abiy won the Nobel Peace Prize for helping end a prolonged war against neighbor Eritrea. Widespread evidence suggests that the TPLF and associated forces are guilty of similar crimes against Oromo and Amharic communities as those allegedly of the ruling government. A TPLF attack on government locations in November 2020, which Tigrayan leaders insist was necessary to prevent a massacre by the government, unleashed a widespread assault in the region that human rights groups accuse of targeting civilians. 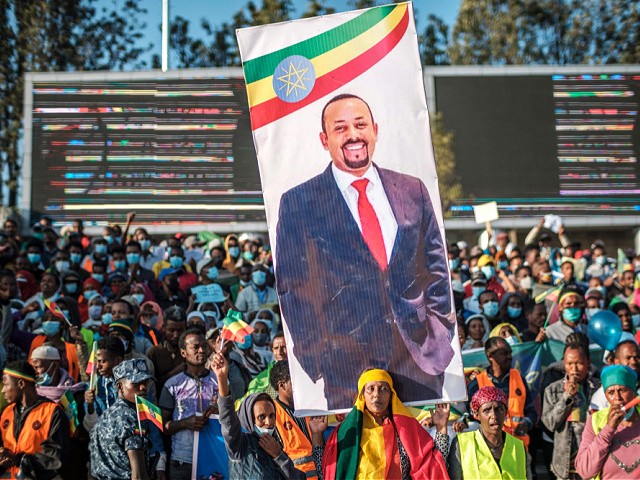 A woman holds a banner with the portrait of Primer Minister Abiy Ahmed during a rally in Addis Ababa, Ethiopia, on November 7, 2021 (EDUARDO SOTERAS/AFP via Getty Images).

Abiy’s government has refused to cooperate with the W.H.O. in part because of its claims that Tedros, as a TPLF member, is working behind the scenes to support the Tigray insurgency.

Tedros asserted that his personal ties to the Tigray region were not impacting his assessment of the humanitarian disaster there.

“I am from that region. I am from Tigray, the northern part of Ethiopia. But I am saying this without any bias … No where in the world you will see a crisis like the one in the northern part of Ethiopia, especially in Tigray,” the director-general asserted. “Lack of medicine has direct impact and people are dying, but lack of food also kills. On top of that, daily drone attacks are killing people … and people are living under constant fear. And you can also imagine how that impacts the people’s mental health.” 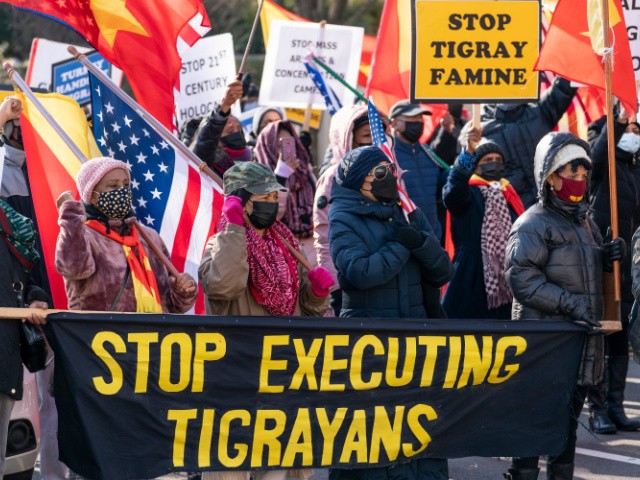 A group from the Tigrayan diaspora in North America protest about the conflict in Ethiopia, near the State Department, on Dec. 22, 2021, in Washington. Officials in Ethiopia have arbitrarily detained and forcibly disappeared thousands of ethnic Tigrayans who recently were deported from Saudi Arabia, a new Human Rights Watch report said Wednesday, Jan. 5, 2022, as the country’s deadly Tigray conflict continues (AP Photo/Alex Brandon, File).

Tedros condemned the Ethiopian civil war generally as “dreadful and unimaginable,” comparable to “hell,” and “an insult to humanity.”

“Imagine a complete blockade of seven million people for more than a year. And there is no food. There is no medication, no medicine. No electricity. No telecom. No media,” Tedros detailed.

W.H.O. officials decried a blockade of basic food and medical items, such as insulin, which do not pose any threat to the Ethiopian government.

The base requirement to save lives is humanitarian access.
In Ethiopia, WHO was able to dispatch 14 MT of medical supplies to Afar & 70 MT to Amhara in December.
In Tigray, WHO has not been permitted to deliver medical supplies since mid-July of last year despite repeated request pic.twitter.com/Q4XABl2KQy

Tedros made similar remarks in November, a year after the violence began.

“People are dying because of lack of supplies,” he asserted during a press conference at the time in Geneva, where the W.H.O. is headquartered. Tedros accused Addis Ababa of implementing a “systematic” blockade intended to keep the W.H.O. out in particular.

“No medicine. People are dying. No food. People are starving. No telecommunication. They are isolated from the rest of the world. No fuel. No cash,” Tedros asserted, adding that Tigrayans like him were “being profiled and arrested en masse, by the thousands.”

The Abiy government accused Tedros shortly after the war erupted in 2020 of lobbying overtly and covertly against it, rallying international support for the TPLF.

“He has worked in neighboring countries to condemn the war. He has worked for them to get weapons,” Ethiopian Army chief Berhanu Jula said of Tedros at the time, claiming the W.H.O. chief had “left no stone unturned” to find support for Tigrayan rebels. The Ethiopian government has not provided any concrete evidence at press time that Tedros is trafficking weapons into the civil war personally.

Human rights groups have continued to document atrocities in the civil war for more than a year.

“Tigrayan civilians attempting to escape the new wave of violence have been attacked and killed. Scores in detention face life-threatening conditions including torture, starvation, and denial of medical care,” Amnesty International denounced in December. The group also accused pro-government Amharic forces of displacing thousands of Tigrayans, emptying local communities, and causing what has swelled into an internal displacement crisis that may soon become a migration disaster for the region.

Tigrayan rebels also stand accused of abhorrent human rights crimes. In a report published last month, Reuters spoke to Amharic civilians in a town attacked by Tigrayans, who spoke of pervasive gang rape and mass killings of boys and men. In one town alone, local officials told Reuters that they had documented 70 gang rapes by Tigrayan invaders.

“I want them all to be wiped out – all the Tigrayans. Let their race be wiped out!” a woman identified as Abay Tsegaye, who told Reuters she was among the rape victims, said to the news agency.

Abiy has called for civilians to join the war against Tigrayans and personally traveled to the front lines to participate in attacks in November.