Philippine protesters, including some members of the nation’s Congress, surrounded the Chinese consulate in Manila and burned Chinese flags to protest Beijing’s disregard for the 2016 international tribunal ruling finding the Communist Party’s colonization of the South China Sea, which turned three years old Friday.

The ruling in Philippines v. China, a case before the Permanent Court of Arbitration at the Hague, found that China’s claims to the South China Sea were invalid and its construction of artificial islands housing military and civilian facilities was illegal. China claims nearly the entire South China Sea, including maritime territory that legally belongs to the Philippines, Vietnam, Malaysia, Brunei, Taiwan, and Indonesia. The Philippines sued China under the prior administration of President Benigno Aquino III for building artificial islands in the waters near the Spratly and Paracel Islands. The ruling came down at the end of his term in 2016; current President Rodrigo Duterte was sworn in at the end of June that year.

Unlike his predecessor, Duterte has refused to challenge China’s colonization of his country. He has repeatedly asserted that the Philippine military is too weak to take on the People’s Liberation Army (PLA), the Chinese military. Last week, he challenged the United States to declare war on China to protect the South China Sea, rather than urge the Philippines to stand up for itself.

The majority of Filipinos overwhelmingly want Duterte to confront China, according to recent polls.

The Philippine Inquirer reports that legislators from the minority Makabayan bloc joined Philippine patriotic groups on Friday to protest China’s invasion of their territory, in observance of the anniversary of the Hague ruling. The group burned the flag of China and held signs reading “demilitarize West Philippine Sea” and “justice for Filipino fishermen.” The West Philippine Sea is a subsection of the South China Sea, home to the Spratly Islands.

Protesters burn a mock Chinese flag with portraits of China's Xi Jinping & Philippine President Rodrigo Duterte during a rally in front of the Chinese consulate in Manila on Friday, to coincide with the anniversary of a UN South China Sea ruling. Photo: Ted Aljibe/AFP. #china pic.twitter.com/BgZcPNXXBR

The protesters demanded before the Chinese consulate that Beijing withdraw from Filipino territory and to stop threatening and attacking Philippine fishermen in their own waters, as a response to a violent confrontation near Recto Bank, in Philippine maritime territory, last month.

A Chinese ship, believed to be illegally present in the Philippines’ exclusive economic zone, rammed and sank a Philippine fishing ship, leaving its 22 crew members in the water to die. The crew survived thanks to the aid of a Vietnamese ship that sailed by and saw the men attempting not to drown.

The Duterte administration’s response to the incident was initially stern. Defense Secretary Delfin Lorenzana issued a statement “condemn[ing] in the strongest terms the cowardly action” of leaving the crew to die. Duterte’s spokesman Salvador Panelo called the ship sinking a “barbaric, uncivilized, and outrageous” action on the part of the Chinese. Duterte intervened, however, and silenced their protests, insisting that the facts of the incident were unclear and ultimately accepting the Chinese ship’s explanation that they left the Philippine sailors to die fearing that nearly Philippine ships would attack.

Duterte later suggested allowing Chinese ships to legally fish in Philippine waters, which would violate the Philippine constitution. Opposition politicians called for impeaching Duterte for his unconstitutional proposal should he execute it.

Duterte’s passive response to China’s aggression is largely at odds with what his people want toe government to do, according to a poll released Friday. Social Weather Systems (SWS), a Filipino research firm, found that 87 percent of respondents across the country believed the Philippines “should assert its right to the islands in the West Philippine Sea as stipulated in the 2016 decision of the Permanent Court of Arbitration.” Another 93 percent said it was important for the Philippines to regain control of its territories in the West Philippine Sea, six points higher than when SWS conducted the same survey last year. One percent said it was “not important” this year.

The poll also found that 89 percent not only believed the Philippines should act to curb China, but that it was “wrong” for Manila not to do so. 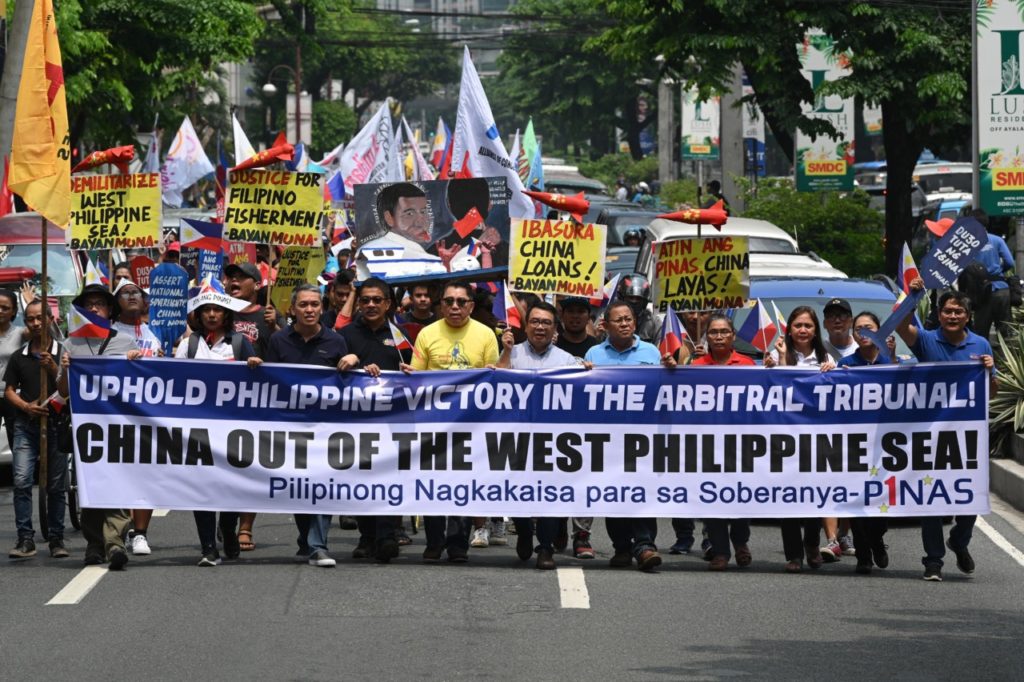 Protesters decended on the Chinese consulate in Manila, to oppose the Asian superpower’s growing sway in the Philippines and as tensions rise over Beijing’s presence in the disputed South China sea. (TED ALJIBE/AFP/Getty Images)

The public being significantly at odds with Duterte on the South China Sea issue does not appear to have affected his personal approval ratings, which hit record highs this month. SWS found that 80 percent of the Philippine public approves of the job that Duterte has done as president, while only 12 percent disapprove.

“For me, it’s all about work,” Duterte said in response to the poll. “[I]f you are satisfied with my work, then I’m happy. If you are not satisfied, then I’ll work more.”

The Permanent Court of Arbitration heard the South China Sea case based on the U.N. Convention on the Law of the Sea (UNCLOS), the international legal document that governs maritime disputes. It found no legal basis for China to be colonizing and invading neighboring territory and dismissed Chinese communist claims that the entire sea had belonged to China since ancient times.

“China’s claims to historic rights, or other sovereign rights or jurisdiction, with respect to the maritime areas of the South China Sea encompassed by the relevant part of the ‘nine-dash line’ are contrary to the Convention and without lawful effect to the extent that they exceed the geographic and substantive limits of China’s maritime entitlements under the Convention,” the ruling read.

“The award is null and void and has no binding force,” the Chinese Foreign Ministry said at the time.

According to the Asia Maritime Transparency Initiative, a think tank that has monitored China’s behavior in the South China Sea for years, China did not completely disregard the ruling – it complied with two of the 11 orders the ruling issued to Beijing, but neither involve yielding control of territory back to the countries it belongs to. China stopped building illegal artificial islands in the South China Sea – potentially the result of concluding its “reclamation” projects, not necessarily attempting to comply with the ruling – and allowed Philippine fishermen to return to the Scarborough Shoal, which is sovereign Philippine territory. China’s fishermen have not removed themselves from the area and returned control to the Philippines, nor has it returned its artificial islands, once natural reefs, to the countries the reefs belonged to.