Hong Kong police used pepper spray against people using the city’s Mass Transit Railway (MTR) and beat them with batons regardless of their participating on protests this weekend, pro-democracy leaders said, citing graphic violence on the part of police forces caught on video.

Protesters attempted to shut down Hong Kong International Airport on Saturday and Sunday, prompting police to shut down the MTR stations nearby and attack suspected protesters to prevent a repeat of last month’s airport sit-in, which forced the facility to cancel flights for two consecutive days. A day before, police targeted Prince Edward Station, about a half hour away from the airport.

Radio Free Asia (RFA) reported that police “indiscriminately” began beating individuals present at the Prince Edward MTR station, attacking them with pepper spray which they were sitting quietly on trains.

“The police, who wore the black, armored uniforms of the ‘raptor’ special forces, appeared to be in pursuit of protesters, but instead attacked passengers indiscriminately, the footage showed. One was a small boy who was left with head injuries,” RFA noted. Footage appeared to show individuals, including protesters, trying to stop police from beating innocent bystanders but largely failing to prevent the violence.

Video of the attacks circulated widely on social media.

HK Police attack unarmed civilians on a train. Is there any different with state terrorism? #HKPoliceState pic.twitter.com/QGT1iyy5dG

Nathan Law, one of the leaders of the pro-democracy group Demosisto, accused police of engaging in a “terrorist attack” against unarmed civilians.

“HK police force rushed into our railway system in Prince Edward station, got into the carriage and indifferently beat up all the people in it regardless [sic] they are protesters or simply passengers,” Law said. “They ignored the weapon guidelines and fired tear gas indoor in the carriage which is in fact lethal.”

“The officers subdued a number of people, while some passengers were seen bleeding from head injuries and others cried. Television footage also showed some people being treated for wounds within the train carriage,” RTHK reported.

Police arrested dozens in Prince Edward and claimed that protesters “had assaulted members of the public,” RTHK reported, but did not provide evidence for the claim.

RTHK also noted that police refused to allow the administration of first aid for the people they had attacked in the rail station. The move triggered protests from an estimated 400 local healthcare workers who alleged police prevented them from doing their jobs to ensure maximum physical damage to those attacked. The healthcare workers were banned from entering the MTR station at all, where many victims were filmed sitting or lying on the floor of trains bleeding.

The violence returned to the airport area – specifically, the Tung Chung MTR station – on Sunday. Protesters reportedly planned another sit-in at the Hong Kong airport to prevent flights from coming and going, but police shut down the Tung Chung station and nearby transport facilities to prevent the protesters from getting there. Police had refused to give the protesters a legal permit to assemble there. 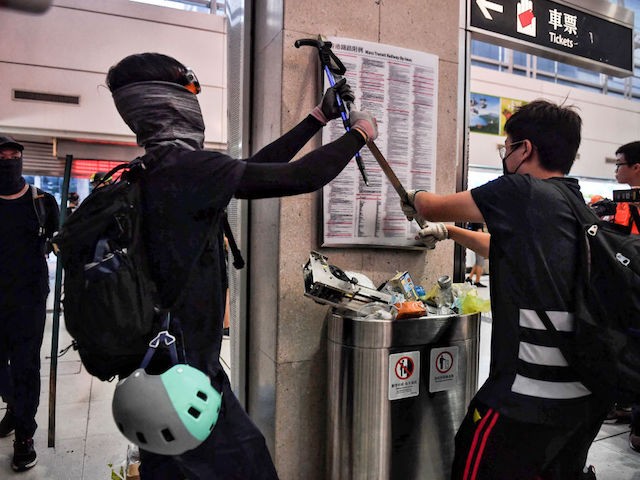 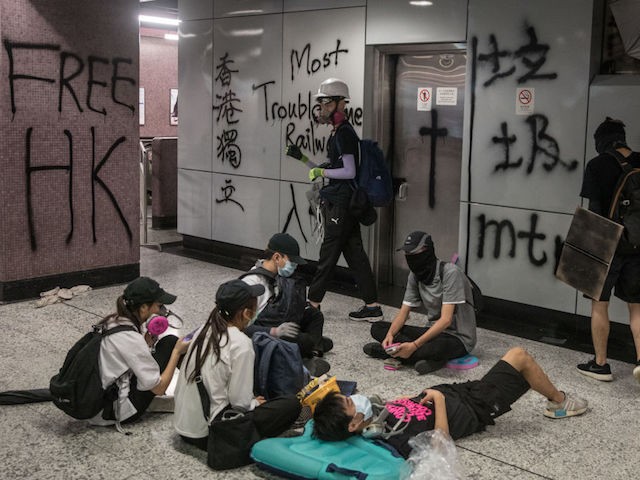 Protesters rest inside the vandalized Causeway Bay MTR station after clashing with police at an anti-government rally on August 31, 2019, in Hong Kong. (Chris McGrath/Getty Images)

RFA estimated that thousands of protesters – and journalists accompanying them – flooded the Tung Chung station on Sunday. The protesters destroyed much of the technology keeping the train station running, including security cameras, ticket machines, and the computers inside a station control room. Protesters have accused the repressive Chinese communist regime of using train tickets to monitor protester behavior and widespread security cameras to track individuals and later arrest them for partaking in peaceful protests.

A fire hose has been broken and water is beginning to spill over the floor of Tung Chung station https://t.co/9fObodoFut #HongKongProtests

The MTR corporation claimed on Monday that protesters had attacked 44 MTR stations and caused significant enough damage to keep some stations from operating on Monday.

“The corporation expresses its anger over such irresponsible and malicious acts which could have caused serious safety incidents and endangered the safety of passengers, and also expresses its deepest regret over MTR staff being harassed,” the MTR said in a statement.

The Asian news outlet Coconuts reported that police arrested nearly 160 people over the weekend, bringing the total number of arrests since June to over a thousand. Those arrested were overwhelming men and boys and aged between 13 and 58.

The People’s Daily, the official newspaper of the Communist Party of China, encouraged Hong Kong police to brutalize protesters in a column on Monday. 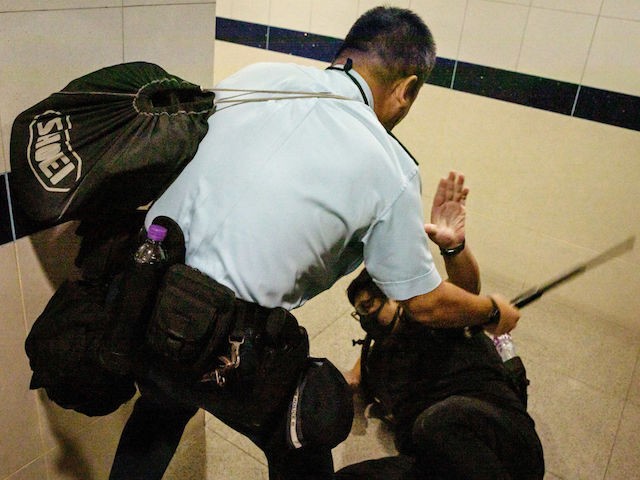 A policeman beats a protester in the men’s toilet inside Hong Kong International Airport on September 1, 2019 in Hong Kong. (Chris McGrath/Getty Images)

“When severe illegal acts take place, and safety and public security are under threat, the Hong Kong police should be assertive in ending violence and riots,” the propaganda outlet argued. “No matter whether in China or any other country, the police force has the right to make a decision facing extreme violence and control the situation in a tough way.”

“Under such circumstances, the Hong Kong police have every right to respond with force, and take necessary measures to protect public order and security. Prompt decisions are needed on the spot, and any actions to stop violence are legal and reasonable,” the People’s Daily concluded.

Protests erupted in Hong Kong in early June in response to a proposed law that would have allowed the Chinese Communist Party to extradite anyone present in the city if accused of running afoul of communist laws. The extradition bill would have violated the “One Country, Two Systems” policy that prevents China from enforcing its draconian laws in the capitalist city. Lawmakers “tabled” the bill, which temporarily ends debate on it but allows the Legislative Council to revive it at any time.

Protesters have made five demands of their government, which the China-controlled Hong Kong executive offices have rejected: a full withdrawal of the extradition bill, an independent probe into police brutality, freedom for political prisoners, direct election of all lawmakers, and a retraction of the government labeling the peaceful June 12 protest a “riot.”