Police in Hong Kong blamed pro-democracy protesters on Monday for scenes of violence in the North Point and Fortress Hill neighborhoods over the weekend, triggered by the presence of pro-Chinese thugs chanting “beat the cockroaches” and instigating fights.

The violent white-clad pro-communists, typically armed with metal rods, have become a nighttime fixture of the Hong Kong protests, which entered their hundredth day on Monday. North Point, which has traditionally hosted immigrants from China, boasts a particularly formidable presence of communists, some openly admitting to ties with the city’s triad gangs.

The brawls in North Point and Fortress Hill on Sunday followed the fifteenth week of peaceful protests attracting thousands to the streets of Hong Kong during the daytime. Hong Kong’s protest movement is demanding the direct election of lawmakers, an investigation into police brutality, and other pro-democracy measures.

Hong Kong Police Superintendent John Tse addressed reporters on Monday regarding the violence Sunday night, asserting that “the violence has again spiraled out of control” and blaming the protesters for taking the streets.

“Many protesters took justice into their own hands and harshly assaulted people who were not on their side. We express the strongest condemnation against such reckless and ruthless violence,” the Asian outlet Coconuts quoted Tse as saying.

Reporters attempted to confront Tse on protesters’ complaints that police have violently repressed their freedom of assembly while allowing the pro-China thugs to act with relative impunity, a response to the press conference not discussing the appearance of mobs in North Point shouting violent slogans and beating anyone found wearing black, the color of the protest movement.

“In terms of differential treatment, I must refute (that),” Tse replied.

The Hong Kong Free Press (HKFP) has documented months of violence against otherwise peaceful protesters, particularly in North Point. On Sunday, HKFP reporters found armed men dressed in white chanting “Fujian people, beat the cockroaches! Fight on police!” in the neighborhood, a reference to the prominent Fujian Chinese immigrant community in the neighborhood.

The pro-China mob began beating both suspected protesters and journalists in the area, the outlet reported, and robbing journalists of cell phones, presumably to keep footage of the attacks from leaking.

“Police tried to separate the group and ushered several people into an ambulance, including the suspect who took the phones,” HKFP reported. Police also allegedly tried to mask the identity of pro-China attackers from journalists. Those who police covered their faces also appeared not to be handcuffed, despite being taken into police vehicles.

The pro-China attackers targeted people easily identified as protesters by their black outfits but also appeared to beat anyone who attempted to intervene and bring peace to the situation. Bystander video surfacing on social media shows some attacking panicked onlookers who attempted to get the attention of police.

Men in white in North Point surrounded and started kicking this man who had yelled that the men in white were attacking people. #antiELABhk pic.twitter.com/iNAlq3Jtmd

In an escalation from previous pro-China mob attacks, assailants on Sunday appeared armed with gasoline and knives in addition to their typical bamboo sticks and metal rods.

Tonight, red thugs attacked civilians with knife and gasoline at North Point. Police did not arrest the red thugs hided in a building after conversations. In stead, police dispersed bystanders and reporters with tear gas, and arrest many innocent civilians. #hkpolicebrutality pic.twitter.com/0TasoAucfD

Some of the attacks openly admitted to being members of triads, the organized crime syndicates endemic in Hong Kong. Triad gangsters began forming mobs to beat protesters in July, following them to Mass Transit Rail (MTR) stations and cornering them in trains to maximize physical damage. Protesters have accused the Communist Party of China of paying the triads to send their thugs to attack them.

Some unarmed members of the pro-China mob engaged in fistfights instead of using weapons. Journalists caught harrowing scenes of people brawling on the streets of North Point; it is unclear to what extent the fights were a direct extension of the protests or if the melee expanded to include other disputes. 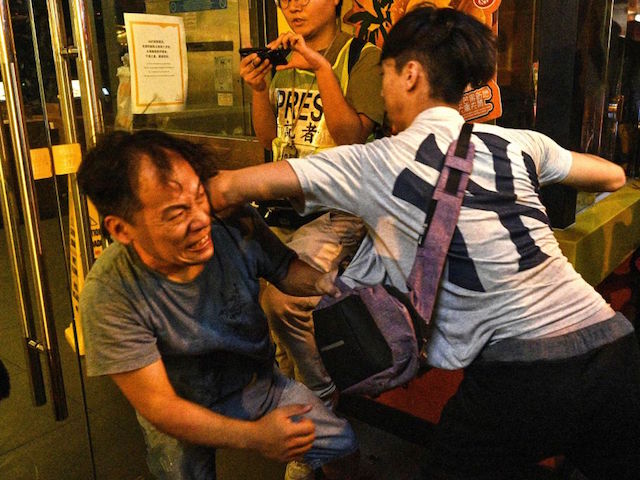 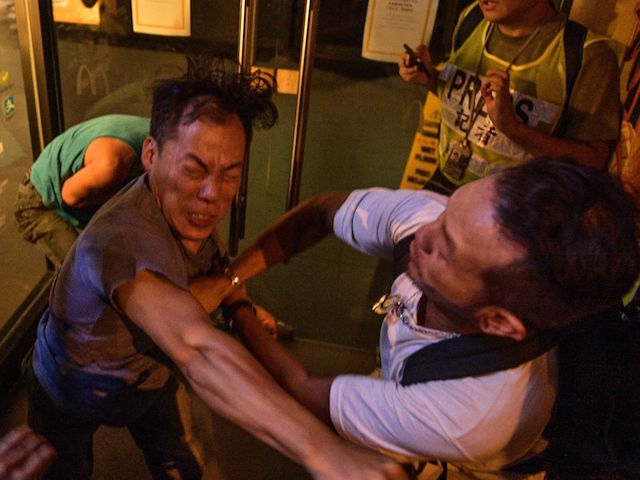 Two people broke into a fight during a protest in Hong Kong on September 15, 2019. (NICOLAS ASFOURI/AFP/Getty Images)

The chaos followed a peaceful, but technically illegal, protest during the day on Sunday. The Civil Human Rights Front, a pro-democracy organization that has taken the lead in keeping the protests orderly and legal, filed for a permit for Sunday’s protest, but never received one. Thousands reportedly showed up in the center of the city anyway, many waving American flags and demanding the individual freedoms emblematic of the United States. 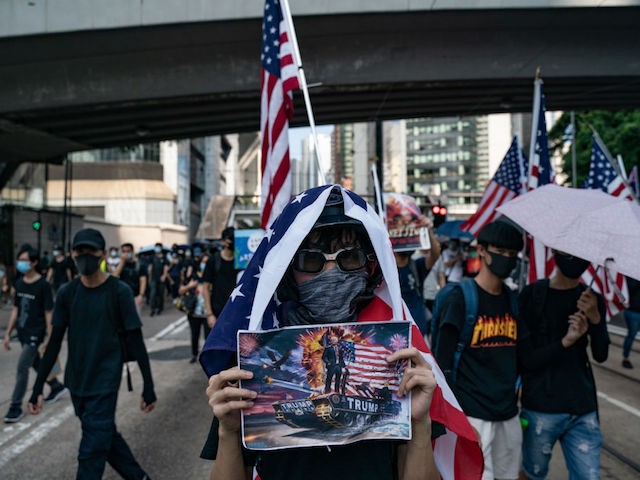 Protesters wave U.S. flags as they gather ahead of a pro-democracy march on September 15, 2019, in Hong Kong. (Anthony Kwan/Getty Images) 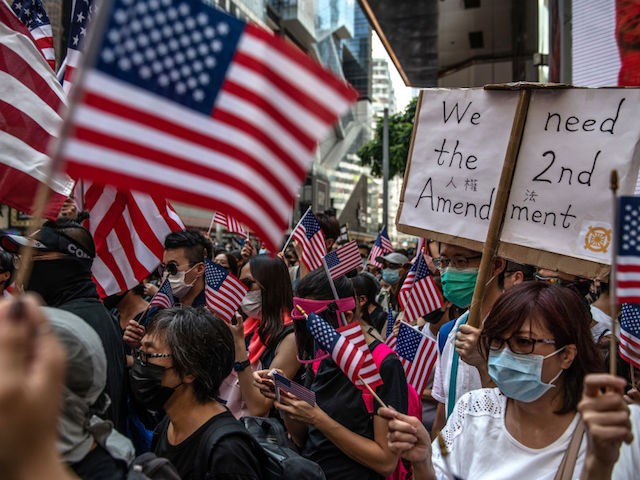 Protesters wave U.S. flags as they gather ahead of a pro-democracy march on September 15, 2019, in Hong Kong (Carl Court/Getty Images)

The protest movement began in June as a response to proposed legislation that would have allowed China to extradite individuals present in China if accused of breaking Communist Party laws, a violation of the “One Country, Two Systems” ban on imposing communism in the city. The government has since promised to withdraw the extradition bill, but the protesters adopted five demands to advance freedom in the city, the extradition bill withdrawal being only one of them. Protesters are also demanding freedom for political prisoners, direct election of lawmakers, a probe into police brutality, and an end to the government calling protesters “rioters.”