A strictly observant Muslim Indonesian man – who worked as a religious policeman enforcing adultery laws – has been publicly whipped after being caught with a married woman. He now stands to lose his job after local Islamic officials expressed a lack of confidence in his ability to discharge his duties.

Aceh Ulema Council (MPU) member Mukhlis helped draft the strict Sharia religious laws ordering adulterers to be publicly flogged and faced the punishment himself when he was publicly thrashed 28 times with a rattan cane on Thursday.

Photos reveal Mukhlis, who like many Indonesians goes by one name, grimacing and flinching during the ordeal in the provincial capital of Banda Aceh, which is controlled by Islamic police. 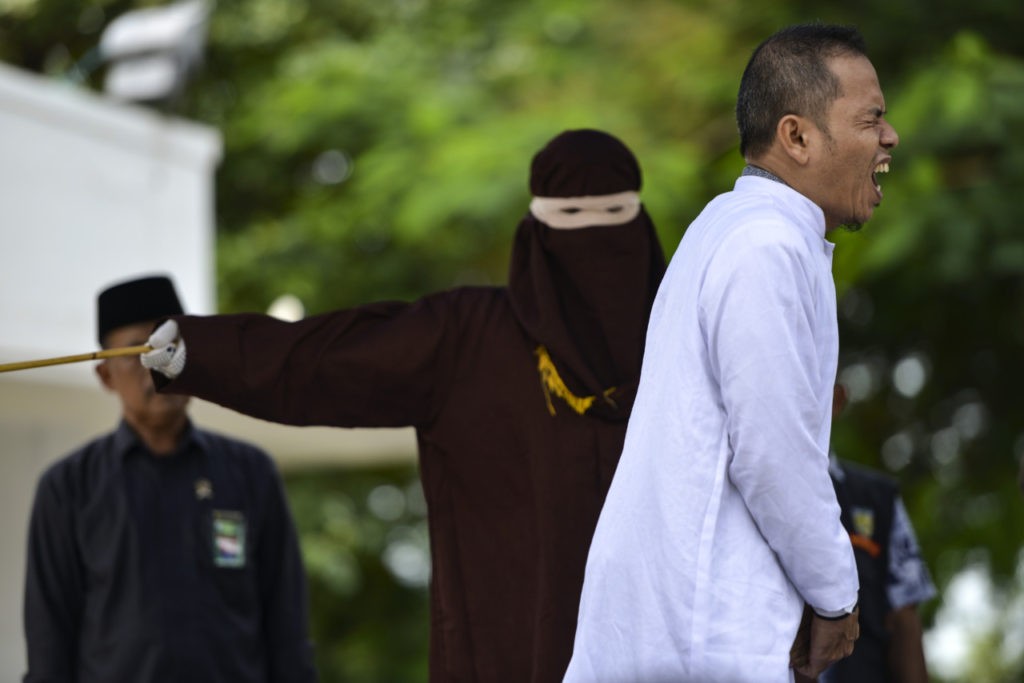 Aceh Ulema Council member Mukhlis reacts as he is whipped in public by a member of the Sharia police in Banda Aceh on October 31, 2019. – An Indonesian man working for an organisation which helped draft strict religious laws ordering adulterers to be flogged was himself publically whipped after he was caught having an affair with a married woman. (CHAIDEER MAHYUDDIN/AFP via Getty Images)

Aceh Besar deputy regent Husaini Wahab said flogging a council member underlined the commitment to enforcing Islamic law. He told reporters: “No matter who you are … if you violate (Islamic) law you will be whipped”.

Mukhlis would likely be sacked under his employer’s moral code, Wahab added.

Gay sex and gambling are also punishable by public caning in Muslim-majority Aceh.

“This is God’s law. Anyone must be flogged if proven guilty, even if he is a member of the MPU,” Husaini Wahab, the deputy mayor of Aceh Besar district, where Mukhlis lives, told BBC News Indonesia.

The couple were caught by officials in September, apparently exchanging sexual favors in a car parked overlooking a popular tourist beach. 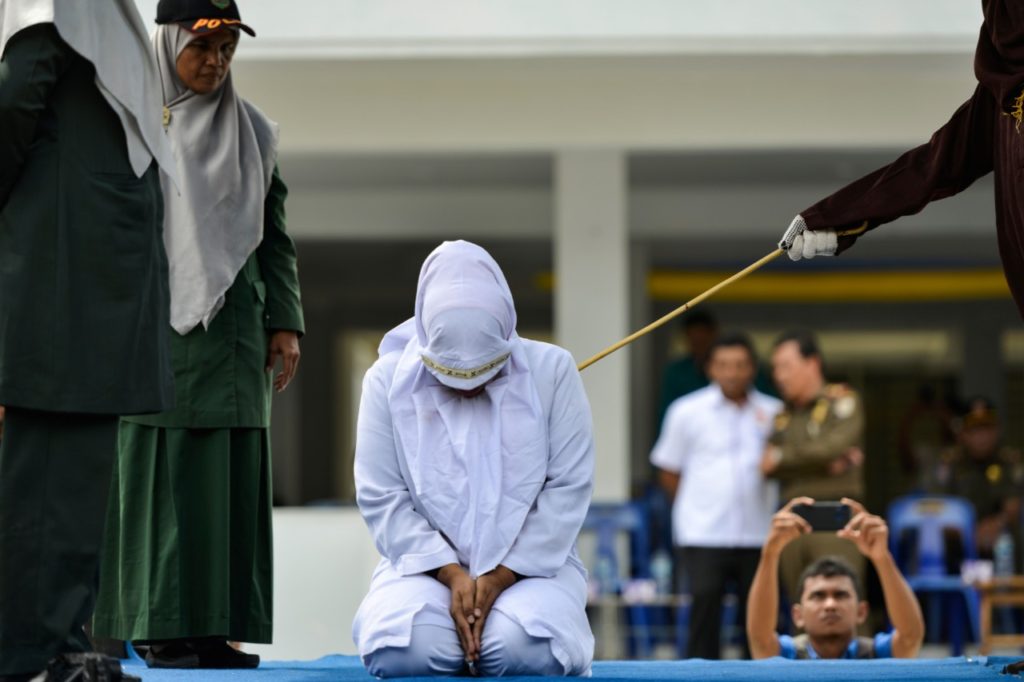 A woman is whipped in public by a member of the Sharia police in Banda Aceh on October 31, 2019, after being caught having an affair with Aceh Ulema Council (MPU) member Mukhlis. (CHAIDEER MAHYUDDIN/AFP via Getty Images)

Husaini added that Mukhlis would also be expelled from the MPU.

The BBC reports Aceh was granted special rights to introduce its own stricter Islamic laws more than a decade ago while laws against homosexuality were passed in 2014 and came into effect the following year.

Extra-marital sex, gambling, and the consumption, production and distribution of alcohol are all illegal under Sharia law.

In 2017, two men were caned 83 times each in Aceh after they were caught having sex. 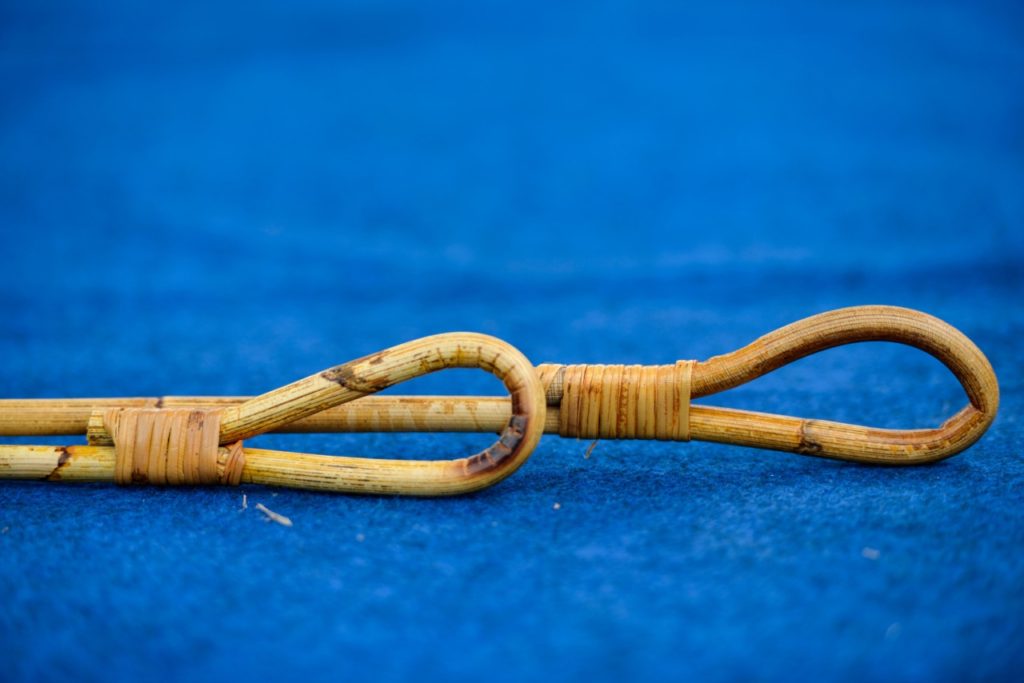 This picture shows rattans in Banda Aceh on October 31, 2019, after Aceh Ulema Council (MPU) member Mukhlis and a woman were whipped in public by a member of the Sharia police. (CHAIDEER MAHYUDDIN/AFP via Getty Images)

Despite international condemnation, whipping is a common punishment for a range of offences in the deeply conservative region on Sumatra island, including gambling, drinking alcohol, and having gay or pre-marital sex.

Aceh is the only region in the world’s biggest Muslim-majority country that imposes Islamic law.

In September,  a trio of canoodling couples were publicly flogged in the strict province, charged with breaking the same local Islamic law that bans any public displays of affection.

As Breitbart News reported, one woman winced and fell over from the painful punishment, which was carried out in front of a mosque.

Five couples received up to 22 strokes each on that occasion – after already serving months inside prison.

The punishments were meted out by a masked ‘religious officer’ – in front of a crowd containing kids – using a rattan cane.

Last year two Indonesian Christians were publicly caned after they were found gambling.