As the number of Christians living under severe persecution around the world grows, American officials must make clear to nations that profit from American business that “human rights are a concern of the American people,” David Curry, the CEO of the Christian aid group Open Doors, told Breitbart News in an interview this week.

North Korea – arguably the most repressive regime for all its citizens on the globe and home to one of the world’s most vibrant Christian populations before falling to communism in 1950 – once again took the top spot, followed by Afghanistan, Somalia, and Libya, respectively. While nations with significant adversarial bents towards the United States made up most of the rest of the top ten, like Iran (number nine) and Sudan (number seven), number ten on the World Watch List is India, one of America’s closest trade partners.

China, America’s top foreign trade partner outside of North America, ranked at 23. Saudi Arabia, a country that generations of presidents have insisted is a top security and counter-terrorism ally, rank ten spots higher at #13. 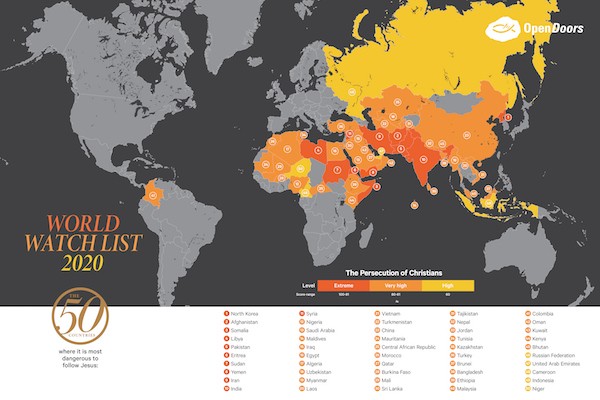 “The reality is, on the World Watch List, there are people we do business with – China, India, Vietnam, Saudi Arabia – where we need to make sure that it’s clear in our trade discussions and otherwise that human rights are a concern of the American people,” Curry told Breitbart News on Thursday.

American officials must make clear, he urged, “if we’re going to do business together, if we’re going to have friendly relationships, we expect people to have a common set of human rights where people can worship freely and be secure, where churches are sacred places that will not be attacked. That people will have a civil force that will protect people’s religious freedom whether you’re Christian or Jewish or Muslim or have no faith at all.”
Curry did not limit this suggestion to the American government, emphasizing that “every government, including this government, needs to make that a standard that we all can agree on.”

While emphasizing that Open Doors is not a political organization, Curry expressed support for the work the State Department under President Donald Trump has done in elevating the topic of religious freedom as a diplomatic challenge.

“The State Department and others in the administration have really focused on, ‘how do we integrate this? imperfectly, I think they have done a better job than anybody certainly in my lifetime, so I want to give them high marks on that,” he said. But Curry added that the universal human rights standard in diplomacy is far from reality “because we do have people, Saudi Arabia – India is number ten on our list we do a lot of business with them – China and elsewhere” that benefit greatly from ties to the United States.

Open Doors has highlighted China in its report this year as a nation of particular concern due to the sophistication of its totalitarian surveillance state, which it uses to monitor and punish Christians who dare worship without Communist Party supervision. China rose four points from the 27th spot on the list in the 2019 edition.

“They are going to fully implement this technological surveillance as a way of monitoring religious practice, not solely against Christians,” Curry noted. “Obviously, what they are doing to the Uyghur Muslims in the northwest part of the country is abhorrent and, while we are reporting on Christian persecution, we recognize what’s happening in China against the smaller Muslim minority group there is exactly what we expect to happen with the Christian groups.”

China’s Communist Party is believed to have imprisoned between 1 and 3 million Uyghurs and other Muslim ethnic minorities in concentration camps in the past year. Survivors say they experienced torture, rape, forced sterilization, slavery, and other human rights atrocities. Uyghurs outside of the camps in western Xinjiang province live under a strict and advanced totalitarian surveillance system – Xinjiang’s capital, Urumqi, is flooded with police cameras and microphones to document every second of Uyghurs’ lives, looking for evidence to use to imprison them.

China claims the concentration camps are “vocational training centers” and the surveillance is necessary to prevent terrorist activity due to the large Muslim population in the region.

“So they’ve got the surveillance,” Curry noted, “they’ve got, you might say, the social credit system, They’re bringing those things together. That’s why we are drawing attention to it. It’s moving quickly.”

The “social credit system” is a points-based evaluation in which China gives communists points for fealty to the regime and removes them for suspicious or potentially adversarial activity. “Illegal” religious activity such as prayer in the home results in point losses. Lose enough points, and a Chinese citizen faces bans from flights, public transportation, and basic government services.

While Curry states his organization has not documented China oppressing Christians outside of its borders, it has begun to sell its technology to other nations on the World Watch List.

“They have the willingness to spread it,” he asserted,” which could result in the technology being used “to more closely monitor the house church movement in Iran and other places.”

In Saudi Arabia, another nation with friendly ties to the United States, statistics on native Christian populations do not exist because churches are simply illegal. Curry contended that this did not have to be the case for the regime to remain secure, citing the existence of Christianity freely in neighboring Bahrain.

“[Saudi Arabia] denies people the ability to have church. Look next door to Bahrain … Bahrain has allowed people to have churches. … Bahrain is an example of a country that has over time began to have these discussions about how can we give people the choice,” he noted. “In Saudi Arabia right now it may be said that there’s no Christians there, but there are people who have freedom of conscience, they have an opinion of their own, and what we’re asking is – can these people have the ability to have a Bible, read it, decide for themselves what they think?”

“That’s all the basis of freedom of religion: the ability to read it, choose to, and decide what they think. Right now, that’s not possible in Saudi Arabia,” he noted. “It needs to be part of the discussion: what does freedom of conscience mean for the people of Saudi Arabia?”

Curry noted that the overlap in persecution of Christians with persecution of other faith or faithless identities – the Muslims of China, the atheists of Saudi Arabia – provides an opportunity for unity and clarity in the objective of Open Doors in its mission: to make the world a safer place for individuals to decide what they believe on their own. Open Doors, he noted, organizes many programs around the world to connect free Christians to oppressed ones. Individuals asserting their principles on their own, however, can have a tremendous impact, he said, as well.

“I don’t underestimate the power of people speaking out and saying ‘this is our standard.’ The right of conscience is the first freedom, it’s the ability to decide for yourself what you think and to practice your faith freely – or if you have no faith at all, to experience that,” he said in the interview. “Atheists are also constrained in Saudi Arabia and these other places because they are forced into a faith. So that’s the fundamental human rights idea. I think speaking out on that, sharing these ideas and letting people know that we’re exposing it – when people share the list, when they talk about it, when they share the stories behind it … people see these are human beings they have emotions and thoughts and intellect just like you and I.”