Walt Disney Company Chief Financial Officer Christine McCarthy admitted in remarks on Thursday that the decision to film parts of Mulan near concentration camps for Muslims in western China had “generated a lot of publicity.”

Mulan, a live-action retelling of the 1998 animated film, tells the story of Hua Mulan, a legendary Chinese woman who allegedly lived in the Sixth Century, AD, and earned fame as an accomplished warrior in an era where women rarely played the role. Human rights activists have called for boycotting the film after its release last week revealed that, in the credits, Disney thanked local “public security” officials in Turpan, a Xinjiang city hosting concentration camps for the local Uyghur population.

China began establishing concentration camps for Uyghurs, an ethnic Turkic people with no significant cultural ties to the Han majority who control the Communist Party, and other Muslim ethnic minorities in Xinjiang in late 2017. By 2019, the Communist Party had built over 1,000 camps, according to a Reuters investigative report. The U.S. Commission on International Religious Freedom (USCIRF) estimated that China had imprisoned nearly 2 million people in its concentration camps as of April 2020, though at their peak the camps reportedly housed as many as 3 million prisoners.

The few survivors of the camps who have come forward publicly say that China uses them to systematically torture Muslims, forcing them to renounce their faith and worship dictator Xi Jinping and the Communist Party. Eyewitnesses say they both experienced and saw others subject to systematic rape, forced abortions and sterilizations, electroshock torture, and slavery. Extensive evidence exists that China is using concentration camp prisoners to harvest their organs for sale on the black market.

McCarthy did not directly address the concentration camps in her remarks Thursday, which reportedly occurred at the Bank of America Virtual 2020 Media, Communications & Entertainment Conference, but lamented that the film had created “issues” for the company. McCarthy defended the film arguing that only some of it filmed in Xinjiang – which locals call East Turkestan, but appears as “northern China” in the movie.

“I’m not a box-office prognosticator, but it has generated a lot of publicity,” McCarthy asserted, “Let me just put something into context. The real facts are that Mulan was primarily shot — almost in entirety — in New Zealand.”

“In an effort to accurately depict some of the unique landscape and geography of the country of China for this period drama, we filmed scenery in 20 different locations in China. It’s common knowledge that, in order to film in China, you have to be granted permission. That permission comes from the central government,” she said.

“So, in our credits, it recognized both China and locations in New Zealand. I would just leave it at that, but it has generated a lot of issues for us,” McCarthy lamented. 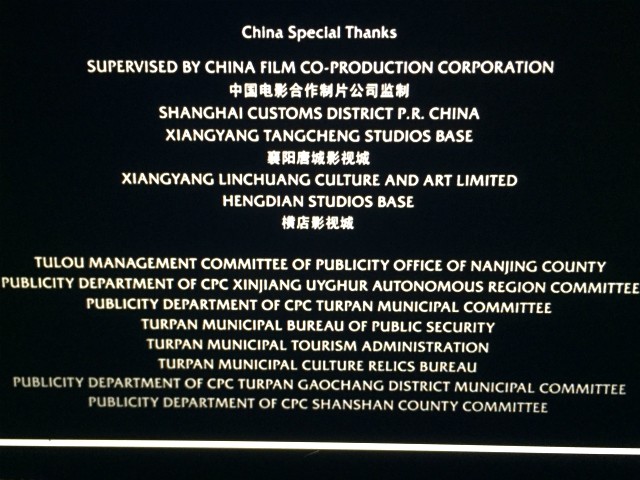 McCarthy did not directly address the issues with Xinjiang, nor did she address the other controversy generating calls to boycott the film: statements by its protagonist, actress Liu Yifei, in support of police brutality against anti-communist peaceful protesters in Hong Kong. Prior to Mulan‘s ultimate release, pushed back in response to the Chinese coronavirus pandemic, Liu posted a statement on Chinese social media reading, “I support the Hong Kong police. You can all attack me now. What a shame for Hong Kong.”

Hong Kong’s police force, nominally functioning in a part of China that should not be subject to communist rule, regularly uses excessive force against protesters and bystanders near protests to suppress democratic sentiments. This week, activists reacted with outrage to a video of police violently tackling a 12-year-old girl to the ground who dared be present in a shopping mall at the same time as protesters. The girl’s mother subsequently told media that she had not spoken about the incident and appeared traumatized by the violence.

Disney’s silence over human rights atrocities in China contrasts significantly with its statements in favor of abortion. Many who have called for a boycott of Mulan have noted that Disney’s embrace of concentration camp administrators in the end credits of the movie differs significantly from its assertive statements in 2016 in support of abortions in the state of Georgia, which had recently acted to curtail attempts to force religious organizations to participate or fund abortions.

Abortions are a pivotal component of China’s ethnic cleansing policy in Xinjiang, Uyghur activists have long held. While China has for decades forced women into abortions – or killed children born “illegally” – to sustain its “one-child policy” among the Han population, it has also systematically embraced sterilizing Uyghur women without their knowledge and killing their children.

Last week, a Uyghur doctor who fled to Turkey told the U.K.’s ITV News that she had personally “participated in at least 500-600 operations, including forced contraception, forced abortion, and sterilization, and forced removal of wombs [hysterectomies].” She also confessed to killing children if women successfully hid their pregnancies until it was too late to perform an abortion.

“Disney and Marvel are inclusive companies, and although we have had great experiences filming in Georgia, we will plan to take our business elsewhere should any legislation allowing discriminatory practices be signed into state law,” a Disney spokesman said in 2016.

Disney subsidiaries have had similar public relations problems regarding support for human rights atrocities in Xinjiang. In July, a reporter for the Disney company ESPN appeared to defend the NBA’s decision to maintain a “training camp” in Urumqi, the capital of Xinjiang, that other ESPN reporters later revealed was a hotbed of human rights abuses.

Adrian Wojnarowski, a senior reporter on the NBA for the company, replied to an email carrying an official statement in defense of Muslims in Xinjiang from Senator Josh Hawley (R-MO) with the short message, “fuck you.” It remains unclear why Wojnarowski directly replied to a statement from a standard Senate mass email address or why he appeared to defend the NBA, which he does not work for. Hawley’s statement did not address ESPN or Disney.

The senator did condemn Disney for Mulan‘s ties to concentration camps this week.

“Your decision to put profit over principle, to not just ignore the CCP’s [Communist Party of China] genocide and other atrocities but to aid and abet them, is an affront to American values,” Hawley wrote in a statement addressed to Disney.