A crematorium in western India’s Gujurat state has been running “so long without a break” during the Chinese coronavirus pandemic that some of the metal parts of its gas and firewood furnaces “have begun to melt,” Reuters news agency reported this week.

“We are working around the clock at 100 percent capacity to cremate bodies on time,” Kamlesh Sailor, the president of the trust that runs the crematorium in the Gujurat city of Surat, told Reuters.

“Prashant Kabrawala, trustee of Narayan Trust, which manages a third [Surat] city crematorium called Ashwinikumar, declined to provide the number of bodies received under COVID [Chinese coronavirus] protocols, but said cremations there had tripled in recent weeks,” according to the news agency. 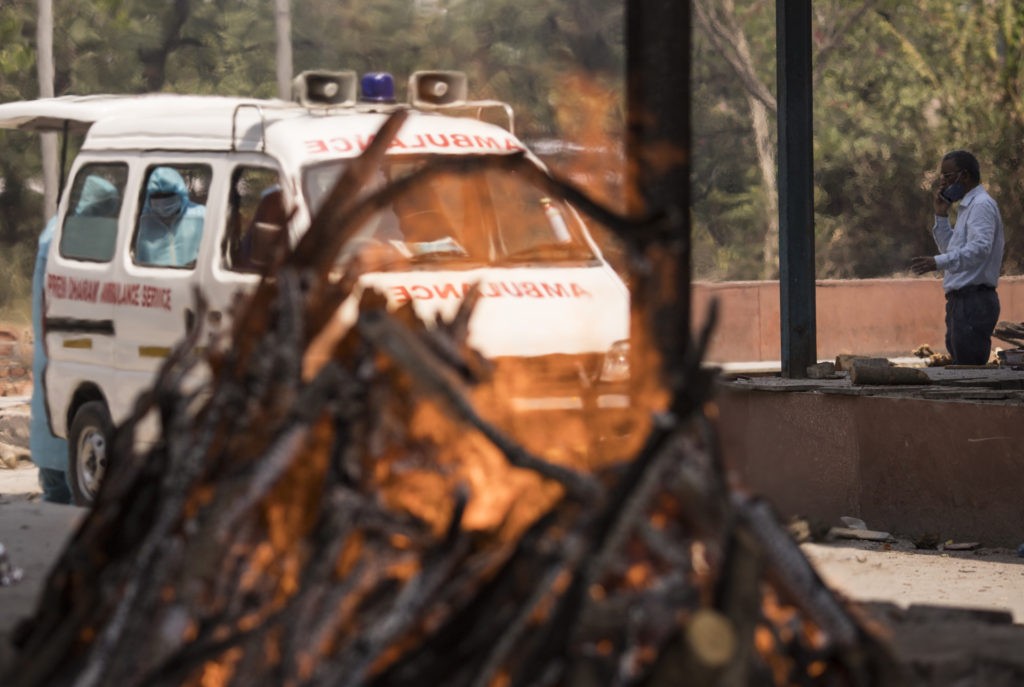 An elderly man (R) talks on the phone as frontline workers unload the body of his relative from a ambulance for the last rites after the relative died of the Covid-19 coronavirus disease at a crematorium on April 22, 2021 in the outskirts of New Delhi, India.  A new wave of the pandemic has totally overwhelmed the country’s healthcare services and has caused crematoriums to operate day and night as the number of victims continues to spiral out of control. (Photo by Anindito Mukherjee/Getty Images)

“I have been regularly going to the crematorium since 1987, and been involved in its day-to-day functioning since 2005, but I haven’t seen so many dead bodies coming for cremation in all these years, even during an outbreak of the bubonic plague in 1994 and floods in 2006,” Kabrawala said.

Surat’s surging cremations are indicative of a recent phenomenon across India in which major cities “are reporting far larger numbers of cremations and burials under coronavirus protocols than official COVID-19 [Chinese coronavirus] death tolls,” according to Reuters. The news agency said it had spoken to “crematorium and cemetery workers” across India, including those at Surat, Indian media, and reviewed Indian government data to draw this conclusion.

India Today published a report on April 14 supporting this observation. Two crematoriums in the central Indian city of Bhopal, capital of Madhya Pradesh state, cremated 187 bodies in accordance with Chinese coronavirus protocols across four days in April, according to the magazine. Bhopal health authorities reported just five deaths from the Chinese coronavirus during the same four-day period.

This is Bhopal's Bhadbhada Ghat crematorium on Apr 11th

Many bodies were cremated here with with COVID protocol

Indian government officials say the discrepancy between India’s cremation and coronavirus death tallies “may be caused by several factors, including over-caution.”

Gujurat’s cremations have surged during the pandemic because bodies are being cremated using coronavirus protocols “even if there is 0.1 percent probability of the person being positive,” a senior Gujurat state health official told Reuters.

“In many cases, patients come to hospital in an extremely critical condition and die before they are tested, and there are instances where patients are brought dead to hospital, and we do not know if they are positive or not,” the official said.