Taliban officials declared victory and the restoration of the Islamic Emirate of Afghanistan after occupying the presidential palace in Kabul on Sunday.

Appearing in a Twitter video alongside other Taliban leaders, Mullah Abdul Ghani Baradar, the group’s cofounder, pronounced victory in the battle for the nation. “We have achieved an unexpected victory,” he said. “Now is the time to test, to show how we serve our people and ensure their future in the best possible way.”

Baradar said the Taliban have appointed him to be “leader of Afghanistan” and take the reigns of government.

Pakistani authorities arrested Baradar in 2010, but freed him in 2018 under pressure from the United States.

The Taliban’s official documents have long referred to the group as the Islamic Emirate of Afghanistan as it claims to be the legitimate government of the country as opposed to the now-defunct U.S.-backed republic.

The restored Islamic Emirate will likely exercise stronger control over the country than it did before the U.S. invasion. The Taliban regime, which ruled most of the country from 1996-2001, never exercised complete territorial control within Afghanistan’s official borders. Much of the northeast was under the control of anti-Taliban militants at the time of the U.S. invasion. Those groups and holdout territories have, however, evaporated. In early July, the Taliban swept through Badakhshan, formerly the center of fiercest resistance against the Taliban pre-invasion, taking many of its districts without a fight.

Afghan soldiers defected and deserted in droves, many fleeing into neighboring Tajikistan. Long War Journal, an independent group dedicated to mapping the Afghan War, asserts the Taliban currently control or maintain a heavy presence in almost 90 percent of the country, including nearly all of the territories that resisted the Islamic Emirate.

Today I came across a tough choice. I had to face the armed Taliban who want to enter the palace or leave the country I have dedicated my life to protecting and nurturing for the last 20 years. If left unchecked, countless patriots would be martyred and the city of Kabul would be devastated, resulting in a major humanitarian catastrophe in the 6-million-strong city. The Taliban had made it clear that they were ready to carry out a bloody attack on all of Kabul and the people of Kabul to oust me. In order to prevent a flood of bloodshed, I decided to leave.

In July, U.S. President Joe Biden insisted the Afghan government could sustain itself and that its fall to the Taliban was “not inevitable.” He went on to deny the prospect of a hasty evacuation of American personnel under fire and denounced comparisons to the Vietnam War and the fall of Saigon.

“The Taliban is not the North Vietnamese army,” Biden said. “They’re not remotely comparable in terms of capability.”

“There’s going to be no circumstance where you are going to see people being lifted off the roof of an embassy of the United States from Afghanistan,” he added. “It is not at all comparable.” 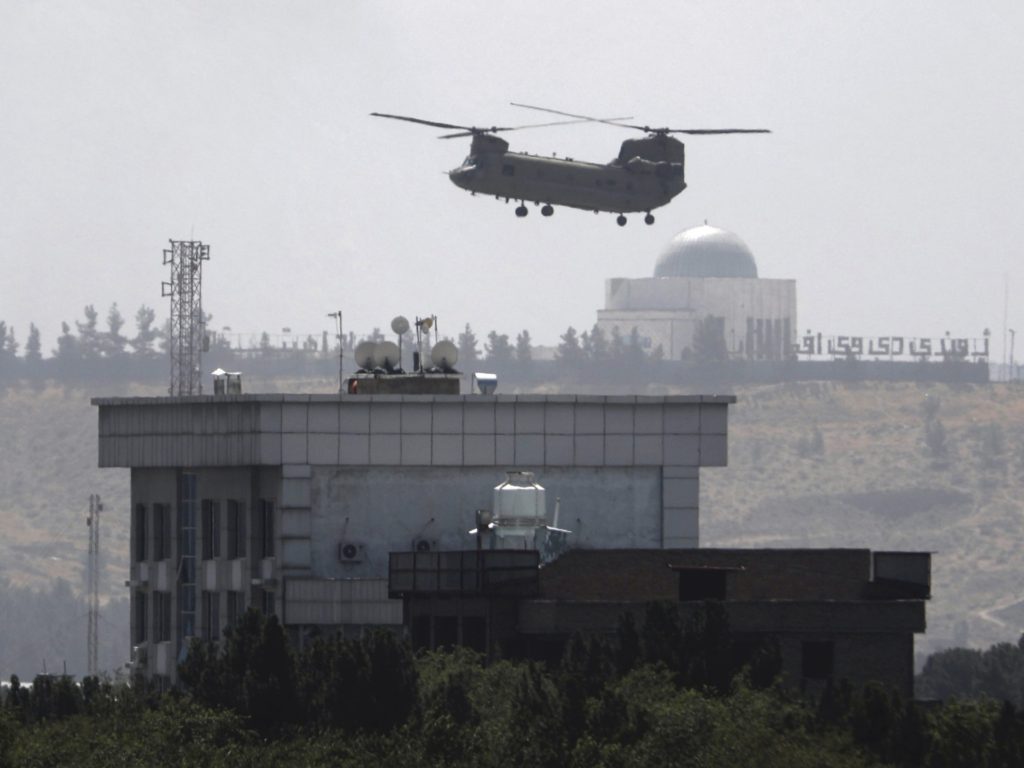 Personnel serving at the U.S. embassy in Kabul were airlifted out of the country via helicopter on Sunday morning. The U.S. ambassador reportedly abandoned the embassy and departed for the airport the same day.

Ben Whedon is an editor/reporter for Breitbart News. Write to him at bwhedon@breitbart.com or follow him on Instagram.