China’s state-run Global Times propaganda outlet published an editorial on Monday mocking the government of Taiwan after the administration of President Joe Biden censored a Taiwanese minister at its “Summit for Democracy” last week.

Biden’s State Department invited Taiwanese government officials to address the virtual event, meant to create a forum for democratic leaders to discuss growing threats from authoritarian governments and how to maximize freedom. America does not formally recognize Taiwan as a country – despite its fully independent sovereign government, military, and social institutions – as doing so would anger China, which falsely claims the island nation as a rogue “province.” The invite outraged China, however, as Taiwan appeared on a list of invitee names that only included other sovereign states, implying that Taiwan was among them.

The Chinese also protested that the Communist Party, a totalitarian institution currently engaging in genocide, was not invited to discuss how to strengthen democracy.

Taiwan’s pride in participating in the event was rapidly tarnished after the State Department abruptly cut Taiwanese Minister Audrey Tang’s feed – ironically, during a panel discussion on “digital authoritarianism” – when her screen showed a map created by an NGO classifying East Asia based on degree of civilian freedoms in each country. As Taiwan is a free democratic state and China is one of the world’s most repressive dictatorships, the two countries appeared in different colors.

The White House and State Department both formally claimed that technical errors and an “honest mistake” caused the feed to cut out. Reuters reported on Monday, however, that Biden officials panicked at the sight of the map and abruptly cut the feed for fear of offending the Communist Party of China.

The State Department has since shared a link to the video of Tang’s address in full, including the map, on Youtube.

Neither Tang nor the Taiwanese government has formally objected to the incident. Tang called the Summit for Democracy “stellar” on social media.

The Global Times responded to the embarrassment by celebrating the Biden administration’s humiliation of sovereign Taiwan.

“Many [Chinese] netizens on Monday morning mocked Taiwan authorities after reading the report by Reuters. It was the natural pleasure of seeing a traitor slapped in the face by his master,” the Global Times editorial declared. “Yet [China] does not really care about this incident. [China] is very clear about the kind of US policy toward Taiwan island.”

“Washington tries to avoid crossing the red line drawn by [China], which is a result of increasing strength of the latter. [China] has more faith in its own strength, instead of illusions about the “rationality” of the U.S.,” the editorial continued. The Global Times, like all Chinese regime propaganda, referred to the legal territory of China as “the Chinese mainland,” a colonialist term implying that things outside of what is legally China also belong to Beijing.

“That’s what happens when you’re a running dog. The Tsai Ing-wen authority has no leverage over the US and can only hope to be embraced by the US, which can kick the island around at will,” the propaganda outlet asserted, referred to the president of Taiwan.

The Global Times accused the United States of benefitting diplomatically from Taiwan receiving neither sovereign recognition nor being seen as a Chinese province, a position at odds with Taiwan’s reality as an independent country.

America, the outlet claimed, “wants to keep the situation in which the island of Taiwan is neither reunified with [China], nor ‘independent,’ in a bid to control the pressure it piles on [China] with the Taiwan question.” 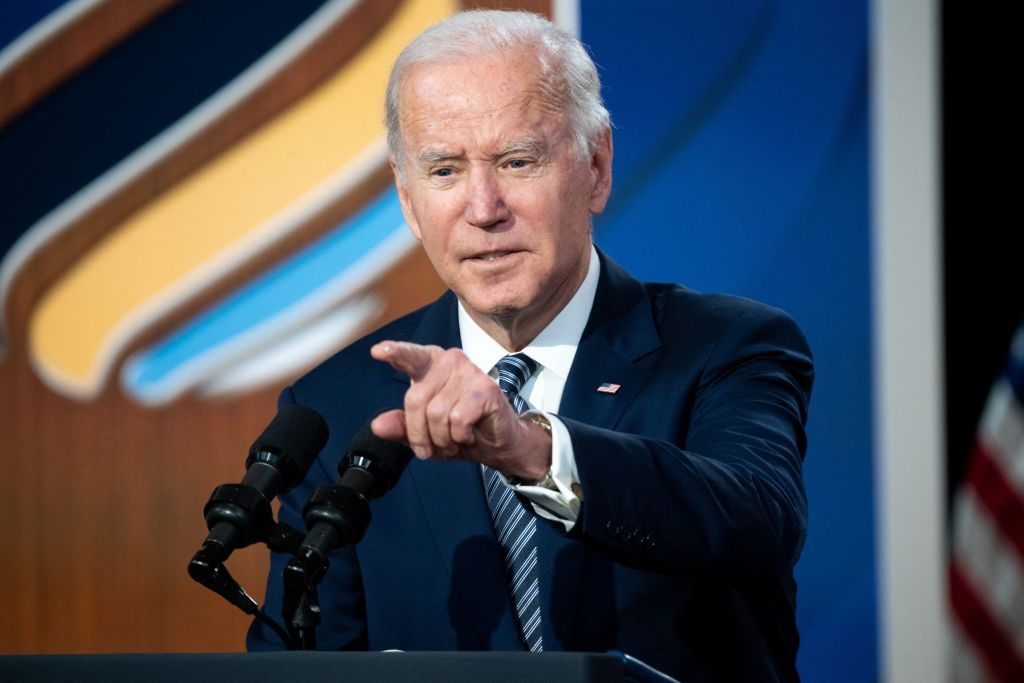 U.S. President Joe Biden speaks during the closing remarks of the virtual Summit for Democracy in the Eisenhower Executive Office Building, adjacent to the White House, in Washington, DC, December 10, 2021. (SAUL LOEB/AFP via Getty Images)

“It is inevitable that the U.S. will say one thing today, another thing tomorrow, and make up for the situation if it goes too much in one direction. Taiwan should not be held hostage by the DPP authority to be a bargaining chip of the U.S.,” the editorial concluded. The DPP, or Democratic Progressive Party (DPP), is the ruling party in Taiwan.
While Chinese propagandists gloat about the incident at the Summit for Democracy, the situation has caused significant outrage in the United States. On Monday, Sen. Tom Cotton (R-AR) demanded that the individuals responsible for censoring the Taiwanese government official lose their jobs.

Biden has yet to apologize, or address in any way, the events at the Summit.

Under dictator Xi Jinping, China has become increasingly belligerent against Taiwan. Xi himself threatened in a speech in 2019 that anyone who supports Taiwan’s status as a free country would have their “bones ground to powder,” offering the same promise to Hong Kong anti-communist protesters.

A study published this month by the NGO Safeguard Defenders found that Beijing has significantly increased its persecution of Taiwanese nationals, abducting over 600 of them between 2016 and 2019 through forced extraditions.