The Chinese Communist government on Monday attempted to hijack the prestige of the United Nations Human Rights Council (UNHRC) by holding a sideshow webinar at which hand-picked experts in “Living Buddha Reincarnation” agreed the next Dalai Lama should be selected by Beijing, rather than actual Tibetan Buddhists.

China’s state-run Global Times labored mightily to make it sound as if the webinar enjoyed the imprimatur of the United Nations, instead of merely being an online panel with a paltry ten participants conducted from the “China Tibetology Research Center” in Beijing — a shop viewed with considerable suspicion by Tibetans.

The webinar came to the apparently unanimous conclusion that whatever cosmic forces might be at work in the perpetual reincarnation of the Dalai Lama, the next one should be chosen under the “management of the Chinese government,” and anyone who disagrees with Beijing’s choice is a “separatist” stooge of the hostile Western world:

Xizang (Tibet)-related affairs have been a tool of the US and other Western countries used to smear China on human rights and other issues. In December 2021, the US named Undersecretary of State Uzra Zeya as “special coordinator for Tibet.” A year before, then US president Donald Trump signed the so-called “Tibetan Policy and Support Act of 2020” – a bill which grossly interfered in China’s internal affairs.

For a period of time, overseas “Xizang independence” forces and Western politicians have hyped up the issue of the reincarnation of the 14th Dalai Lama for political purposes, ignoring the tradition of the Buddhism, and acting as an adverse influence on the religion. 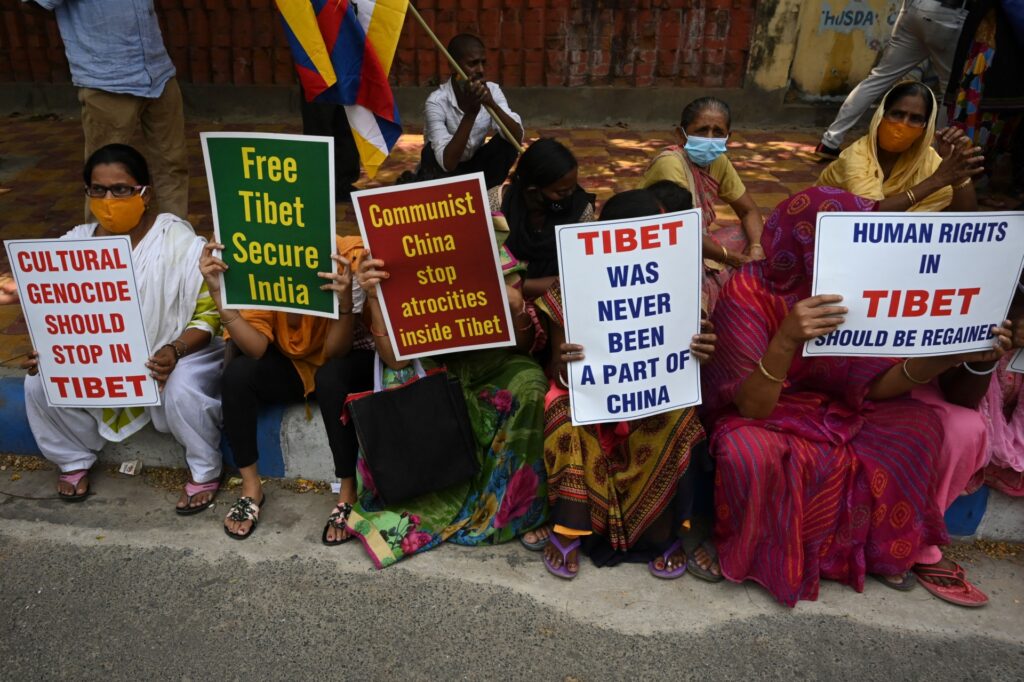 Activists hold placards during a protest against the Chinese invasion in Tibet ahead of the birthday of the 11th Panchen Lama Gedhun Choekyi Nyima, next to the Chinese Consulate in Kolkata on April 23, 2022.  (DIBYANGSHU SARKAR/AFP via Getty Images)

Beijing doesn’t even like referring to Tibet as “Tibet” anymore, preferring its Chinese provincial name “Xizang.” One suspects the upcoming 14th reincarnation of the Dalai Lama will embrace the authority of Beijing much more fervently than his 13 preceding incarnations did. 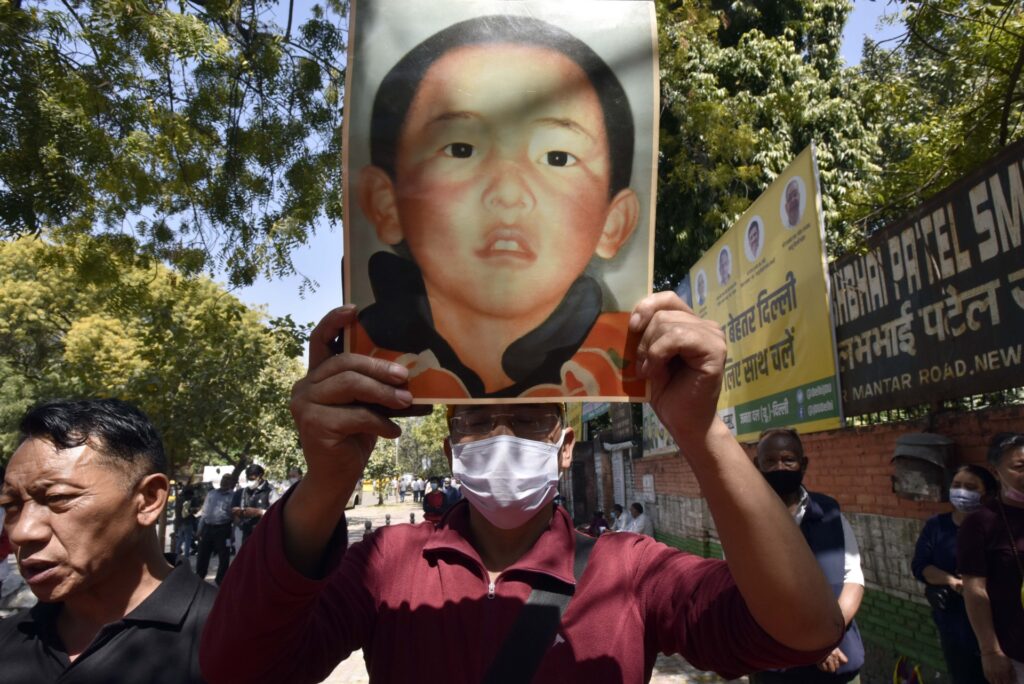 The major argument advanced by Beijing’s Tibetology experts was that Tibetan Buddhism has been thoroughly “Sinicized” — that is, dominated and controlled by the Chinese government. They argued that most of the religion’s believers are Chinese subjects, so human rights groups are distorting the true nature of the religion by arguing it belongs to either Tibet or the world at large. 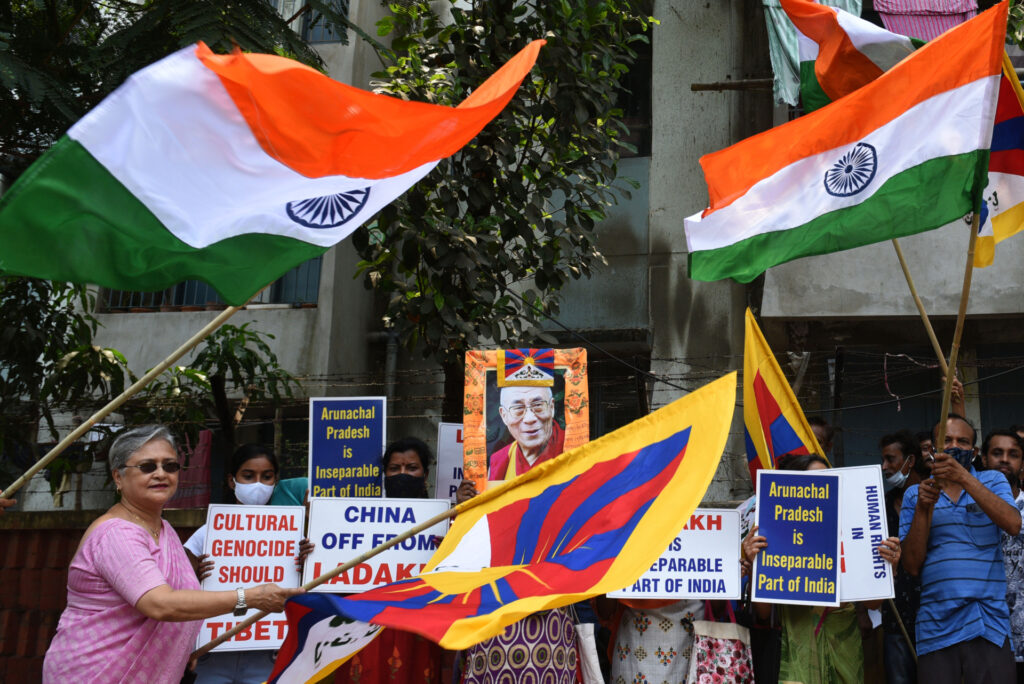 Supporters of the Dalai Lama seen with his portrait, posters, flags of Tibet and India, as they participate in a sit-in protest against China on Tibet issue and also with regard to Ladakh and Arunachal in front of the Chinese consulate, on April 23, 2022 in Kolkata, India. (Samir Jana/Hindustan Times via Getty Images)

Contrary to the impression presented by Chinese state media and Communist Party-organized webinars, there is no “consensus view” that the next Dalai Lama should be chosen by the regime in Beijing.

On the contrary, the current incarnation — who believes he has quite a few years left before he dies — has suggested that while he might not be reborn as a Tibetan, he could be born in a “free country” like India, which has hosted him since he fled the Chinese occupation of Tibet in 1959. He has also floated the idea of selecting a successor while he is still alive or declaring that he will not be reincarnated at all.

The Chinese government passed a law stating that it must approve the reincarnations of the Dalai Lama and other senior Buddhist leaders, but the Dalai Lama and the Tibetan parliament-in-exile have explicitly rejected it. The official position of the U.S. government is that only Tibetans should decide who the next leader of Tibetan Buddhism will be.

China is willing to play hardball to ensure it controls Tibetan spiritual leaders, as demonstrated by the example of Gedhun Choekyi Nyima, a six-year-old boy who was identified as the Panchen Lama — the second most important figure in the Tibetan Buddhist faith — by the current Dalai Lama in 1995.

Beijing responded by making Gedhun Choekyi Nyima and his entire family disappear, their fates uncertain to this very day, and replacing him with a puppet “Panchen Lama” selected by a group of Buddhist leaders under Communist Party control. The Panchen Lama and the Dalai Lama alternately act as mentors to each other, depending on which of them has reincarnated more recently, so controlling the Panchen Lama gives Beijing some influence over who the next Dalai Lama will be.