A report published by Hong Kong Watch and Professor Laura T. Murphy of the University of Sheffield Hallam on Monday found that dozens of American, British, and Canadian state pension funds are passively invested in Chinese companies that face credible accusations of enslaving Uyghur Muslims.

The report, entitled Passively Funding Crimes Against Humanity: How Your Savings May Be Financing Internment Camps and Forced Labor in China, identified 13 Chinese companies listed on three vital Morgan Stanley Capital International (MSCI) indexes that use forced Uyghur labor provided by Chinese state-sponsored programs, or have been involved in the construction of concentration camps for the Uyghurs.

China is currently engaging in genocide against the Uyghur people and other non-Han communities in East Turkistan, a western region under Chinese communist occupation the regime refers to as Xinjiang.

One of the companies spotlighted by the report is Foxconn Technology, the Taiwan-based company whose enormous plant in Zhengzhou, China, is the world’s largest facility for assembling Apple iPhones. The authors cited documentation that shows “hundreds of Uyghur workers have been transferred to Foxconn factories,” including the one in Zhengzhou, where they have “reportedly been required to work at least 100 hours of overtime every month.”

“Foxconn participates in the ‘Xinjiang Aid’ scheme, and Uyghur workers are under constant surveillance, subject to patriotic re-education, and expected to express gratitude to the Communist Party,” the authors noted. 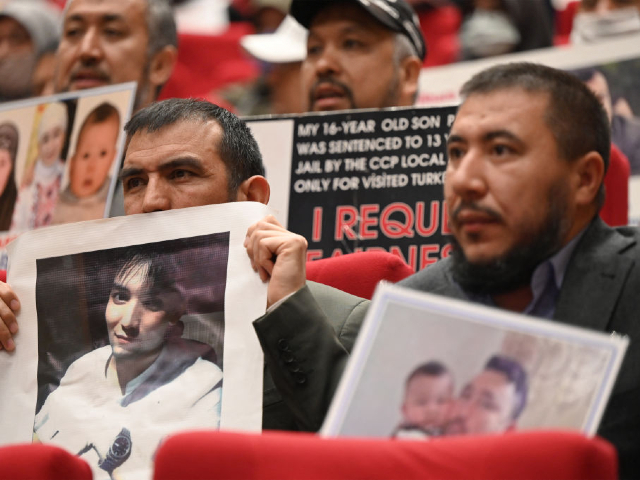 File/Members of Muslim Uyghur minority present pictures of their relatives detained in China during a press conference in Istanbul, on May 10, 2022. Turkey’s Uyghur community urged the U.N. to probe so-called “re-education camps” during a long-delayed visit to China this month including to Xingjiang, where Western lawmakers have accused Beijing of genocide. (OZAN KOSE/AFP via Getty)

The Foxconn plant in Zhengzhou is currently in the headlines because many of its workers fled a brutal coronavirus lockdown, and those who remain are rioting against poor living conditions and abusive labor practices. Apple is warning customers worldwide that iPhone supplies could be significantly delayed due to the unrest at the Zhengzhou plant.

“Xinjiang Aid” is the Chinese Communist Party’s official euphemism for its abusive Uyghur policies. China claims the massive concentration camps dotting Xinjiang province are merely “vocational training schools” that just happen to be surrounded by barbed-wire fences for no particular reason. The concentration camps hosted as many as 3 million people at their peak, but have since shipped thousands out to work in factories across the country as slaves. The Communist Party openly sells Uyghur slaves to companies online.

Xinjiang Aid presents China’s slavery programs as the benevolent Communist state offering free transportation to exciting job opportunities in other provinces for the graduates of these grim “vocational schools,” where they work for minimal-to-no pay and have no control over the terms of their employment.

The report lists investment funds that hold equities in the offending Chinese companies, a list that unfortunately includes “some of the largest private pension fund managers and important local public pension funds in the U.K., Canada, and USA.”

“Given MSCI’s popularity as a global benchmark for emerging markets, this list does not include all funds that are invested in these indexes; other funds may be equally exposed,” the authors noted.

Topping the list were funds managed by BlackRock, HSBC, UBS, Invesco, and Deutsche Bank, all of which were invested in six Chinese companies documented to employ forced labor, plus six companies involved in the “construction of repressive infrastructure” in the Chinese province of Xinjiang where the Uyghurs live. 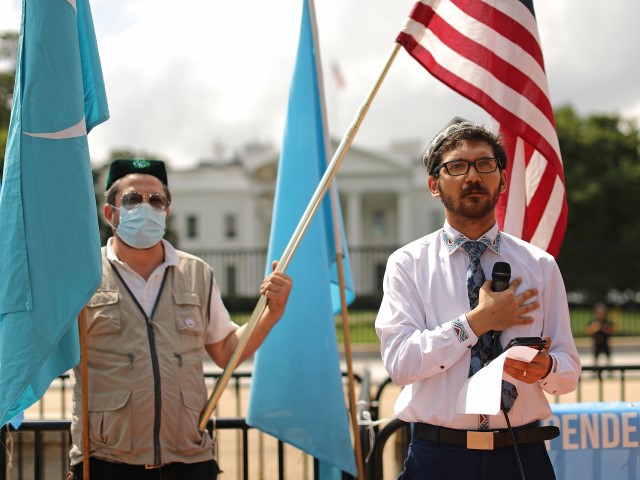 File/Salih Hudayar (R), founder of the East Turkistan National Awakening Movement, leads a rally outside the White House to urge the United States to end trade deals with China and take action to stop the oppression of the Uyghur and other Turkic peoples August 14, 2020 in Washington, DC.  (Chip Somodevilla/Getty Images)

The report noted that only three of the Chinese companies it highlighted for abuses are currently covered by the Uyghur Forced Labor Prevention Act (UFLPA), a U.S. law that took effect in June. The UFLPA requires importers to prove that products harvested or manufactured in Xinjiang are not tainted with forced labor, a much higher standard than previous import controls.

“This is a noticeable blind spot, given the publicly available data that can be accessed about every firm listed. The U.S. government should expand the lists to ensure that companies known to be complicit in forced labor are excluded from importing goods under the UFLPA,” the report advised.

The authors also advised the U.S. government to “harmonize” the UFLPA with the list of entities covered by Executive Order 14032, a June 2021 order that banned investment in Chinese entities associated with human rights abuses and the rising security threat of the “military-industrial complex of the People’s Republic of China.”

The authors noted that UFLPA does not ban investments, so until it is harmonized with Executive Order 14032, it is possible for Americans to invest in firms whose imports are banned because they engage in slavery.

The report made similar recommendations to the European Union and Canada, advising the creation of carefully vetted “entities that are known to be involved in state-imposed forced labor in the Uyghur region” and using this master list to apply harmonized bans on “public procurement, pension, government investment, and imports.”

“Lawmakers and government officials must urgently consider how it could be morally defensible for federal employees’ pensions to be passively invested in companies complicit in gross human rights violations in the Uyghur Region,” the report said.

“13 companies on MSCI’s emerging markets index are either known to have directly used forced labor through China’s forcible transfer of Uyghurs, or been involved in the construction of camps,” said Hong Kong Watch co-founder Johnny Patterson.

“Given this Index is the most widely tracked Emerging Markets index in the world, it raises serious questions about how seriously international financial institutions take their international human rights obligations or the ‘S’ in ESG,” he contended.

ESG stands for “Environment, Social, and Governance Investing.” The concept was introduced precisely to avoid the kind of passive investing in support of human rights abuses documented by Murphy and Hong Kong Watch.

One of the report’s recommendations for Western corporations was to universally blacklist “firms complicit in genocide, crimes, against humanity, or moder-day slavery” from global indexes used by public pension funds and private investors.

Patterson said firms “known to use modern slavery, or known to be complicit in crimes against humanity” should be classified as untouchable “sin stocks,” like tobacco.

“Governments have a duty to signal which firms are unacceptable, but international financial institutions must also be doing their full due diligence. It is unacceptable that enormous amounts of the money of ordinary pensioners and retail investors is being passively channeled into firms that are known to use forced labor,” he said.

Murphy, a professor of human rights and contemporary slavery at the Helena Kennedy Center for International Justice at Sheffield Hallam University, said investing in the Chinese companies identified by her research is both a “serious ethical risk” and a financial risk, because “these companies have been targeted by government sanctions and international advocacy campaigns.” 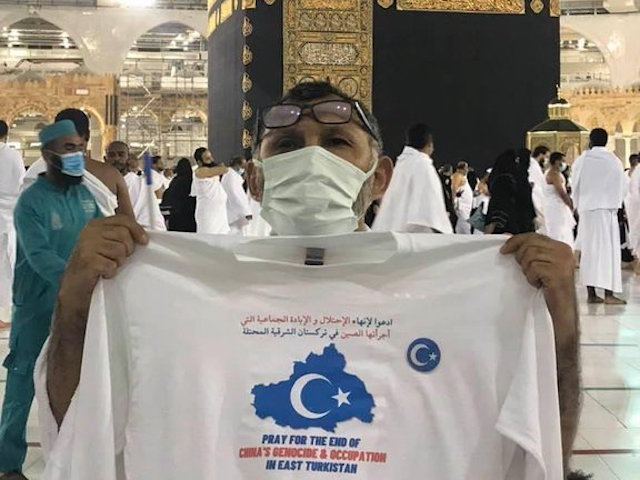 File/Setiwaldi Abdukadir holds up a shirt asking Muslims to pray for Uyghur victims of genocide in China in Mecca, Saudi Arabia, in October 2021. (Getty)

“So many people’s pensions, retirement funds, and savings are invested passively because, as average consumers, we don’t have time to investigate each and every investment,” she observed. “No one should be passively invested in the oppression of the Uyghurs.”

“The brands called out in this report stand as a cautionary tale for what can happen when companies do business in opaque or high-risk geographies without appropriate and continuous human rights due diligence,” said Anita Dorett, director of the Investor Alliance for Human Rights.

“Millions of Uyghur and other Turkic, Muslim-majority peoples are subject to egregious human rights abuses, and the financial and human rights performance of companies and their investors are put at risk. When it comes to respecting human rights, there can be no such thing as a passive investor,” Dorett said.

“This report should be a wake-up call to every asset manager and pension fund. Investors should require companies they are invested in to fully trace their supply chains and urgently divest from any links to the Uyghur Region or to forced labor transfers from the Region,” declared Rushan Abbas, executive director of the Campaign for Uyghurs.

Abbas urged investment indexes like MSCI to delist companies linked to slavery, “so that average citizens do not need to worry that they are funding crimes against humanity.”

The Toronto Star reported on Monday that Canada Pension Plan, one of the funds described as passively investing in the Uyghur genocide, rejected the report’s conclusions and insisted it has vigorous safeguards against investing in foreign companies that abuse human rights.

“We might use different programs to track an index, but we do that through a synthetic process of derivatives, and that means we’re not actually invested in the companies that make up the index,” said Michel Leduc, senior managing director of public affairs for the Canada Pension Plan Investment Board (CPPIB).

Hong Kong Watch policy and advocacy director Sam Goodman countered that his report’s data on the Canada Pension Plan is accurate, and does show the plan making over $13 billion in passive investments in Chinese firms linked to forced labor. He invited the investment board to furnish any updated information that might dispute the report’s conclusions.

“If the situation has changed and CPPIB has divested from any exposure to MSCI China and MSCI Emerging Markets, we would welcome clarification of their position and the publication of the full listing of new holdings on its website,” Goodman said.

Other analysts and Canadian lawmakers told the Toronto Star that the Canadian government should create lists of banned entities like the United States does to make it easier for fund managers to avoid passively investing in forced labor – and make it easier for individuals to know when their pension funds are making such investments.

“It’s almost impossible for someone sitting here in this part of the world to look at a company and understand its level of support for the Chinese military or the abuses in Xinjiang, if you don’t have good Chinese and research skills. Institutions have internal process, but most are skewed toward compliance, not toward ethical good governance,” explained Control Risks senior partner Dane Chamorro.

“In China, technology companies are selling surveillance technology to not only the Chinese government but also globally in areas that some business investors would find uncomfortable. Is this defensible to stakeholders? What’s acceptable two years ago may not be acceptable today so it’s a moving piece,” Chamorro said.

Another Canadian fund listed in Passively Funding Crimes Against Humanity, the Civil Service Superannuation Board (CSSB) of Manitoba, declined comment when contacted by the Toronto Star, as did Morgan Stanley and the office of Canadian Finance Minister Chrystia Freeland.