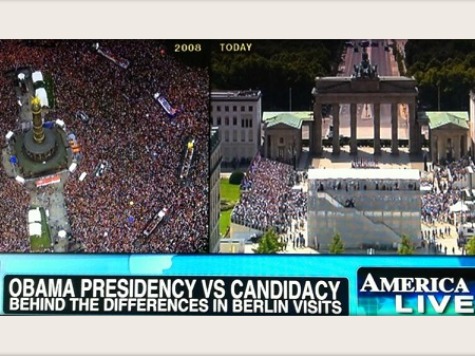 In 2008, then-Senator Obama had no record and our corrupt media had no interest in vetting him. Therefore, he was a cipher; a thing upon which the world could gaze and pour their hopes and dreams into. With his empty prose and sketchy rhetoric about hope and change, Obama positioned himself to be whatever you wanted him to be.

And our compliant, biased, irresponsible, and dangerous media willfully aided and abetted that deception.

Wednesday, The Reality pulled in only around 4,500.

One excuse for this is that Wednesday’s Obama event was invite-only. But we all know that’s a fig-leaf from an administration worried about how many would show up. Unless, of course, you want to believe a narcissist like Obama “chose” not to be celebrated before a big crowd.

What a difference a failed presidency makes