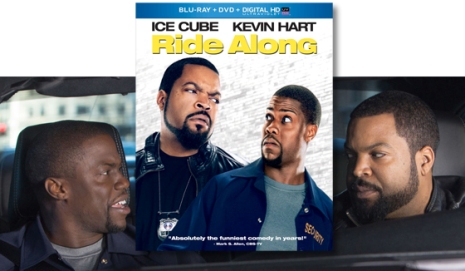 Because actors sexually-debasing themselves in nihilistic plotlines is not my idea of funny, I tend to stay as far away as possible from the modern-day Hollywood comedy. Every once in a while something like the first “Hangover” will come along and delight me. But why waste two hours for a few chuckles when a 22-minute “Seinfeld” rerun is guaranteed to put you on the floor?

Life’s too short to sit through two hours of women riffing on their vaginas.

I did, though, make an exception for director Tim Story’s “Ride Along.” But only because of Ice Cube. The rapper-turned-actor/producer really delivered with his two “Barbershop” films and even more so with the “Friday” trilogy. Laughs, heart, a sense of place and likable characters made all five of those films favorites of mine.

“Ride Along’s ” co-star, Kevin Hart, is supposed to be the next big thing, so I also wanted to see what all the fuss was about.

And how can you go wrong with a mismatched-buddy cop picture?

Unfortunately, “Ride Along” just isn’t funny. It made a fortune at the box office, and a sequel is already being fast-tracked, but the movie does not provide a single laugh. I chuckled twice — once at a joke mocking a Prius.

Another attraction to this particular genre is the action. On top of the laughs, buddy-cop films are supposed to deliver car chases, gunfights, and other types of gleefully inappropriate violence. I can actually live without laughs if there’s enough twisted metal and broken glass.

Sadly, “Ride Along” fails to deliver there, as well.

The concept should have worked. Ice Cube plays Payton, a go-it-alone Atlanta-based cop obsessed with catching an arch-criminal no one else really believes exists. His sister is engaged to Barber (Kevin Hart), a man-child who wants to become a cop. To dissuade him from both, Payton agrees to take Barber under his wing for a day with a ride-along, a program that allows civilians to spend a shift in a car with an active-duty policeman. Naturally, Payton sets barber up for a rough time before things get unexpectedly real.

Other than that Prius joke and an unexpected affection for guns and those who sell them, “Ride Along” offers no surprises other than astonishing waste of a comedic talent like Ice Cube.

I will see the sequel though. I have faith this can and will work better the second time.

‘Ride Along’ is available for sale at Amazon.com.