DONNA, Texas – The school board in this border city surrounded in a cloud of corruption spent taxpayer money on a trip to Las Vegas, where a board member got married and the group of officials attended an event where Democratic presidential candidate Hillary Clinton spoke.

Just last month, the members of the Donna ISD School Board traveled to Las Vegas to attend the National Association of Latino Elected and Appointed Officials, which featured Hillary Clinton as the guest speaker for the convention. During the trip, one of the board members also took advantage of the opportunity to get married to her boyfriend, who is also the brother in law of the Donna ISD police chief. 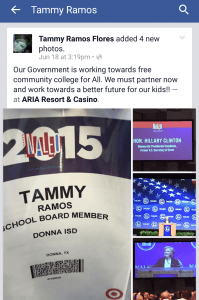 “The road to the White House runs through the Latino community,” said NALEO Executive Director Arturo Vargas in news release form the convention. “We are pleased to have Hillary Clinton join the nation’s largest gathering of Latino policymakers and look forward to hearing her address the most pressing issues facing the Latino community today.”

Unlike the convention held by the National School Boards Association, an education-specific event hosted in Boston next April, NALEO describes itself as a non-partisan 501(c) (3) organization looking to “integrate Latinos fully into American political society, provide professional development opportunities.” 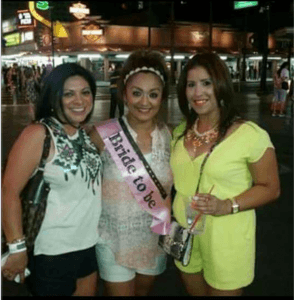 Facebook photograph that shows Donna School Board Member Tomasa “Tammy” Ramos having her bachelor party in Las Vegas during a conference trip paid with school money.

In addition to getting a free ride to Las Vegas, board member Tomasa “Tammy” Ramos enjoyed a Vegas wedding. She married her boyfriend Michael Flores, the brother in law of Donna Police Chief Roy Padilla.

As previously reported by Breitbart Texas Padilla led a biased investigation against Superintendent Jesus Reyna and board member Ernest Lugo, claiming that they had tried to bribe him. The investigation appears to be an attempt at removing the two since they had been keeping the board from making questionable decisions.  Padilla, a former narcotics investigator in various task forces, is the brother of Jose Padilla, a former commander with the Hidalgo County Sheriff’s Office who now serves prison time for taking cash from a Mexican drug trafficker.

One of those questionable decisions included the hiring of attorney Robert Salinas, a previously convicted felon who served federal prison time for money laundering, Breitbart Texas previously reported. The school board hired Salinas at a $300,000 retainer despite paying the previous law firm an $80,000 retainer. 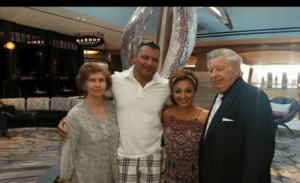 Robert Salinas, the convicted money laundering felon that was hired by Donna ISD served as a witness in the wedding of one of the board members in Las Vegas.

According to information provided to Breitbart Texas by a source with direct knowledge of the trip, Salinas served as a witness during the wedding between Ramos and Flores. As news of the wedding began to create controversy in Donna, Flores took to social media to argue with detractors in an expletive filled post obtained by Breitbart Texas. 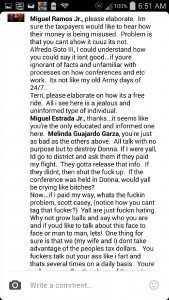 Miguel Flores, a relative of the Donna ISD police chief, insults people on Facebook who questioned his Vegas wedding to a school board member.