HOUSTON, Texas — The funeral service for Harris County Deputy Darren Goforth was held 11 AM, Friday, September 4, 2015 at the 2nd Baptist Church on Woodway.

On August 28th, while in uniform, Deputy Goforth was putting gasoline in his Harris County Sheriff’s patrol car when he was shot at point blank range 15 times.

The first things you notice upon arriving at the church were the many trees with blue ribbons. There was a police helicopter high above the church. All parking lot area national flags were at half-staff. There were about 20 TV trucks in the parking lot. The funeral was a national event. It was truly a celebration of this man’s life. 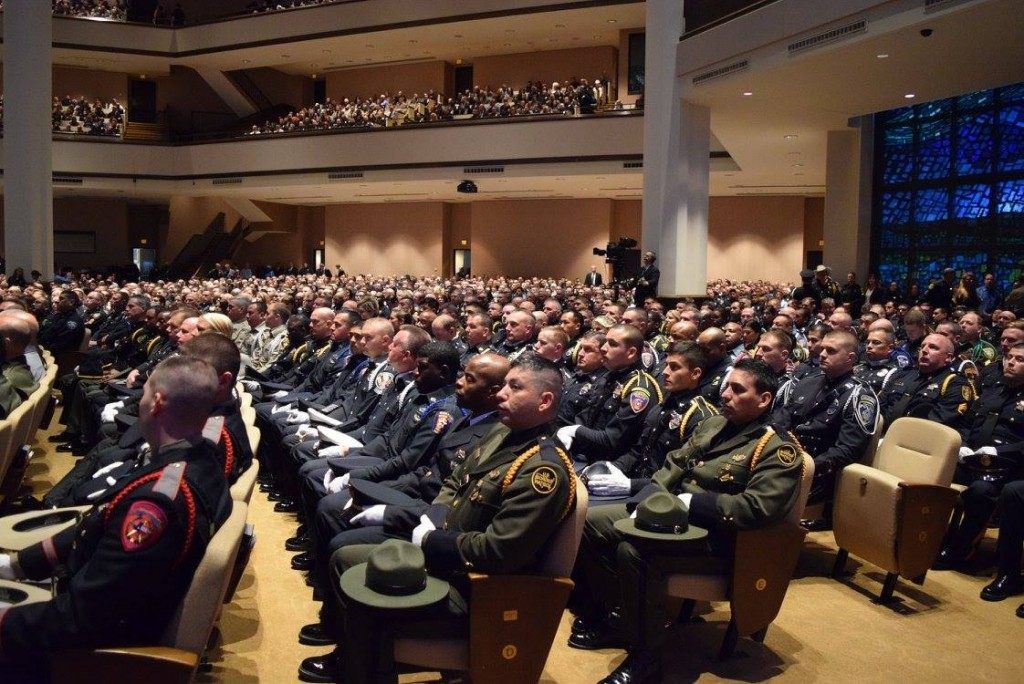 Inside there was a full church. Deputy Goforth’s casket was in front of the church with a large American flag. There were 11,000 peace officers and supporters from coast to coast. 2nd Baptist Church has glorious stain glass windows. The main room seats 5,000 and the adjoining halls seat several thousand additional people. Many peace officers brought their family members.

The ceremony began with large screen photos of a loving Darren Goforth family. There were pictures of his wife Kathleen, his son Ryan and daughter Ava. 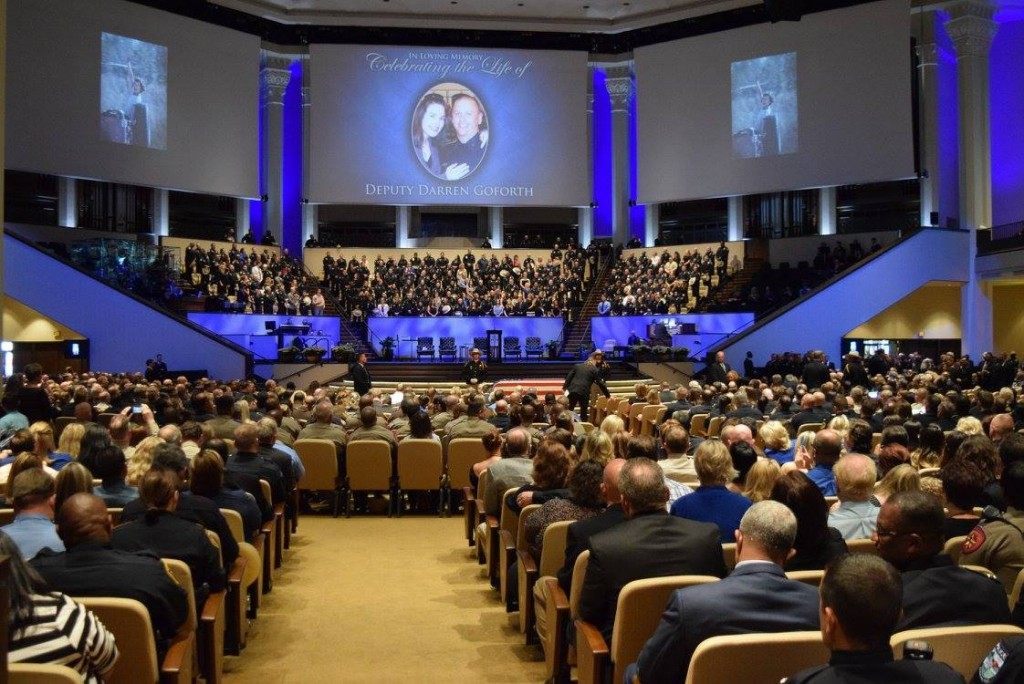 Members of the local Sheriff and police departments began by noting the community outpouring of support. Darren’s children now have 4,000 surrogate parents, said the Sheriff’s Office chaplain. They have lost their father. The officers delivering the eulogy explained how Darren was well liked, hardworking, and effective. He loved humor and he was a genuine person.

Then Dr. Ed Young of 2nd Baptist delivered the Message. He began with a reading from Exodus. The passaged noted priests in ancient Israel wore blue as a symbol of authority. Dr. Young looked out and pointed to the sea of blue in the audience. Then he referred to the Lord’s Prayer when we asked “to be delivered from evil.” “Deliver” is an interesting world since it means to protect and save, he explained.

There is no definition of “evil” in Webster’s the pastor said. Dr. Young’s definition of evil is “anything that conflicts with the purpose of God.”

“The good news is that evil cannot win!!” he promised. He continued, explaining that peace officers’ job description is to deliver us from evil. What is horrendous is now evil is attacking the blue uniform in the death of Deputy Goforth. Now is time for healing, not revenge. Go out and service, protect, and deliver us from evil.

We then went outside. Dismissal with a rifle salute and departure of the funeral cortege. When the ceremony ended dark clouds arrived and there was a light rain after the ceremony.