Breitbart Texas traveled to the Mexican border cities of Reynosa and Matamoros to recruit citizen journalists willing to risk their lives and expose the cartels silencing their communities. The writers would face certain death at the hands of the Gulf Cartel if a pseudonym were not used. Breitbart Texas’ Cartel Chronicles are published in both English and in their original Spanish. This article was written by Reynosa’s “AC Del Angel.”

TAMPICO, Tamaulipas—The Gulf Cartel in this city appears to have taken revenge for a crime that rocked the southern part of Tamaulipas and became worldwide news; the father and brother of a famed film director were kidnapped and executed. The murder took place even after the relatives had paid the kidnapping ransom. Days after the case became public, the bodies of the executed kidnappers turned up alongside with a narco-banner signed by the Gulf Cartel.

On September 4, cartel gunmen kidnapped in Tampico two businessmen Juan Manuel Gomez Fernandez and his son Juan Manuel Gomez Monteverde – the father and brother of acclaimed film director Alejandro Gomez Monteverde. Sixteen days later, on September 20, authorities recovered the bodies in the town Pueblo Viejo Veracruz even though the family had paid for their ransom.

This barbaric act was strongly condemned by the community, businessmen and politicians alike who voiced out their outrage at the unending crime wave that overwhelms the region. The bodies had been left behind for several days in the area where they were found in the northern part of Veracruz right on the border with Tamaulipas

At first, authorities claimed that the kidnapping and executions had been carried out by a cell belonging to Los Zetas. Following the discovery of the bodies in the state of Veracruz, Attorney General Luis Bravo Contreras and his counterpart in Tamaulipas, Ismael Quintanilla Acosta, established communication in an effort to solve the crime.

On September 27, residents witnessed when two vehicles, one of which was a Taxi, dumped two bodies on Nacional Unit Street right outside of Viejo Rodeo bar in Tampico. The cartel members placed a narco-banner on the bodies and rapidly fled the area. 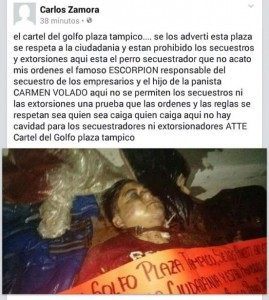 An anonymous profile on Facebook with the name Carlos Zamora posted an image of the crime scene and transcribed the message from the narco-banner where the Gulf Cartel claims responsibility for murdering the kidnappers. “The Escorpion,” as described in the banner, also allegedly kidnapped the son of a local politician.

In this city, the hegemony of the Gulf Cartel has been lost; the capture of seasoned leaders has resulted in the splintering of cells that act in a more independent fashion. With a growing list of younger and inexperienced bosses, common crimes have skyrocketed as well as high-impact crimes such as kidnapping.

By killing the kidnappers, the Gulf Cartel seeks to separate itself from the kidnappings and murders; however, average citizens appear to not have been convinced. The sentiment in this area is that the cartel members are to blame for the wave of crimes that continue to affect families in this city.