HOUSTON, Texas – Transgenders, and those supporting transgenders, rallied in the cold and rain in the heart of the LGBT enclave of Montrose in Houston on Saturday. When Breitbart Texas spoke with transgender Olivia Maynard, she immediately exclaimed – “I am obsessed with Breitbart and Matt Drudge!”

Olivia said she likes to read the comments to articles published on the Breitbart News and Drudge Report websites.

Another transgender woman added, “I love Breitbart and your KKK readers’ comments.”

Olivia described herself as a “Commie, Vegan, Trans.” When questioned about the Commie designation, she playfully retorted, “I’m going to change that part because there’s no money in it!” 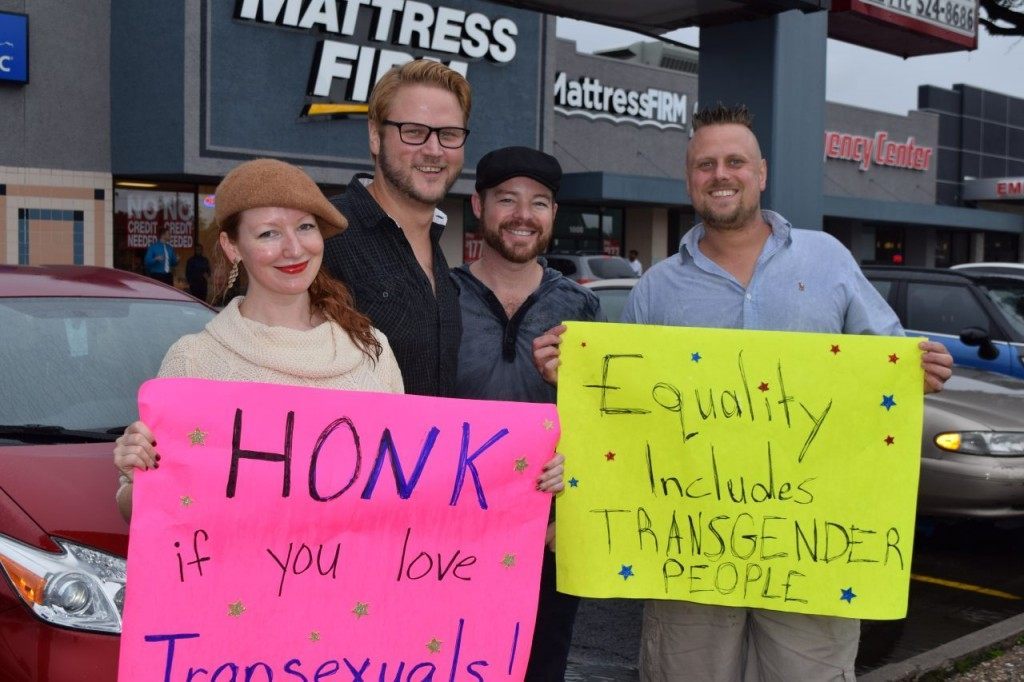 Olivia, like the others at the rally, told Breitbart Texas, “We want people to know that we are not evil, and we are not going to rape you in bathrooms.”

Trans supporters say it is transgenders that are most likely to be the victims of violence in a restroom. The transgender woman was referring to the recent Houston ballot issue. Opponents to the proposed city ordinance said it would allow men dressed as women in women’s restrooms. 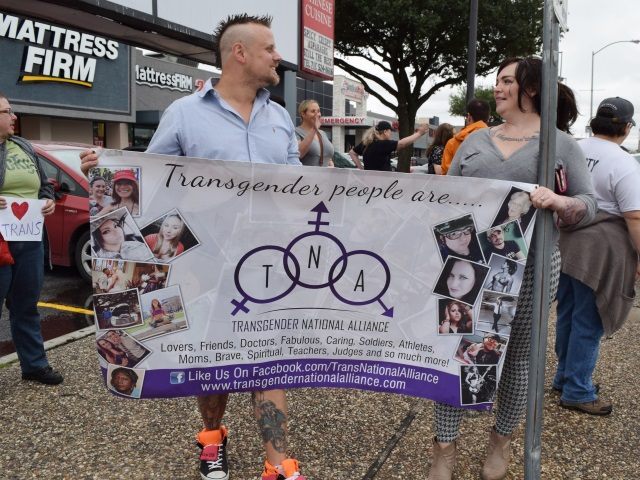 As reported by Breitbart Texas, opponents defeated the “bathroom ordinance” by a margin of 61-39 percent. The city’s openly gay mayor, Annise Parker, said passing the Houston Equal Rights Ordinance (HERO) was very “personal” for her. The City of Houston and opponents have been sparring in and out of court over the ordinance for 18 months.

Nikki Araguz Loyd, the transgender widow of a fallen firefighter who made headlines for suing to collect benefits she said are rightfully hers, was at the rally. She told Breitbart Texas, “Why preach to the choir? I want to talk to the congregation.” She added, “I think the reality is that we want to educate the readers about who we are rather than who we aren’t.” 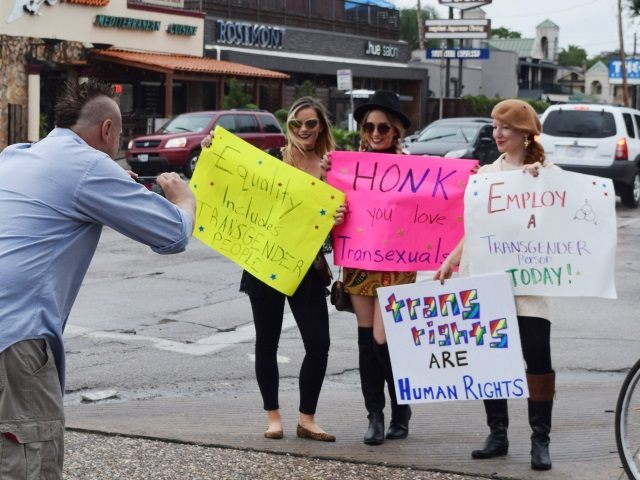 Nikki describes herself as a “heterosexual trans woman.” She says she was born male and “transitioned as a teenager when she was 15 years old.” She said “she knew even younger than that.” She explained, “You begin to self-identify before you even have a concept of who you might be attracted to.”

Nikki’s husband, artist William Loyd, told Breitbart Texas, “Equality does not have a start or stop.” He added that a lot of Breitbart News readers feel the same but “some of the younger people do not vote Republican” because they disagree on the transgender issue. He said, “Republicans lose votes especially with younger ones on the issue of equality.”

Will said the issue should be “linked right up to black and white issues from the 1960s. In the 1960s, it was easy to have open racism. That’s how gender identity will be looked at in the future.” 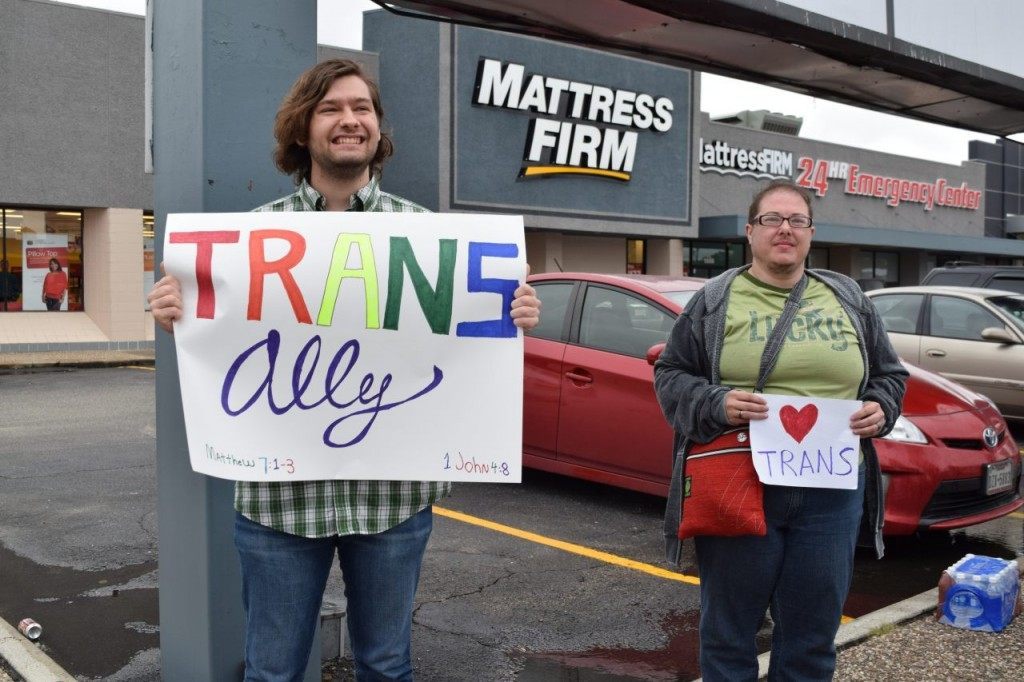 His wife Nikki said, “The whole anti-HERO became a series of attacks on transgender women that we are the predators. In actuality, we are the prey, we are being killed.” She said, “over 20 transgender individuals have been brutally murdered this year alone.”

Breitbart Texas asked her about GOP presidential candidate Ben Carson’s solution to have a different bathroom for transgender individuals. Nikki replied – “How did segregated bathrooms work out in the 1960’s?” She and other supporters of transgender individuals said they find it astonishing that a black American would make such a suggestion.

Veronika Simms described herself as a Republican, Christian, transgender woman. She said the City of Houston made a strategic mistake during the HERO litigation when they subpoenaed Houston area pastors. As reported by Breitbart Texas, the action was taken by the city during the litigation over the ballot referendum.

Simms also told Breitbart Texas, “The Republican Party needs to understand that they are holding on to anti-GLBT platforms and it is tearing the Party apart.” 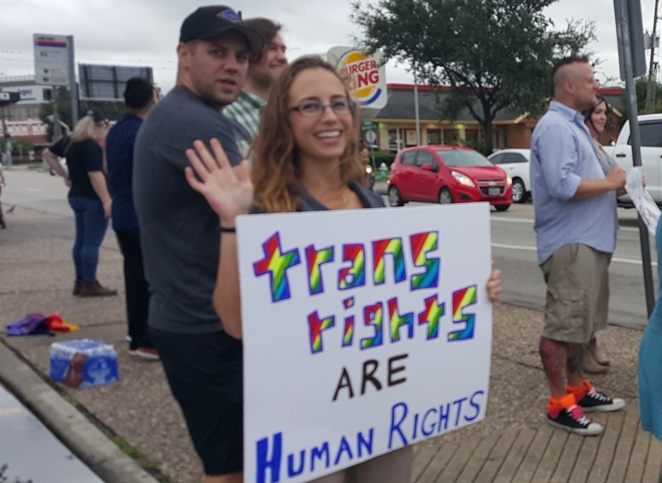 Heather Ringo said, “As a Christian I believe in emulating Jesus Christ and I feel that some individuals use Christianity to hurt transgenders.” She said, “I do not believe Christ would approve of their abusive language and behavior.” Heather and her husband are both heterosexual. She said she was there to support the transgender rally and “show them I see them as human beings.” Her husband, a former Army Ranger, was at her side.

The supporters of the transgender and LGBT community at the rally told Breitbart Texas that the proposed ordinance was more about protection from discrimination, and protecting them from violence.

Olivia said, “We want people to know we are human beings.” She explained that the transgender issue is a “medical condition called dysphoria, not a lifestyle choice.”

Dysphoria has been defined in a medical dictionary as “unhappiness with one’s biological sex or its usual gender role, with the desire for the body and role of the opposite sex.” Olivia said that “the effects over time leads to serious problems such as suicide, mental illness, addiction, and depression.” She continued, “Holding back the true feelings of yourself is not healthy and is not good in the long-term.” Olivia said, “We are about living authentically.”

Joseph Machado, a general manager in the oil and gas industry in Houston said, “My demographic are your readers.” The 52-year-old white male was there to lend support to the trans community.

As reported by Breitbart Texas, Jonathan Saenz, president of Texas Values Action called the defeat of the HERO ordinance “a national game changer.” He said on the night of the election, “Today’s vote is a massive victory for common sense, safety, and religious freedom, not just in Houston, but for all of Texas.” He continued, “The eyes of the nation were on Houston, and the people sent a clear message and soundly rejected this intentionally deceptive and dangerous ordinance.”

Rev. Dave Welch of the US Pastor’s Council told Breitbart Texas after the election that the proposed ordinance was the local defeat of a national leftist LGBT agenda.

Lana Shadwick is a contributing writer and legal analyst for Breitbart Texas. She has served as an associate judge and prosecutor. Follow her on Twitter@LanaShadwick2