A Mexican ex-governor, wanted by the U.S. Department of Justice on money laundering charges tied to Los Zetas and the Gulf Cartel, made a public appearance during the State of the State speech given by the current Tamaulipas governor where the fugitive politician said “I’m not worried.”

This week, Tamaulipas Governor Egidio Torre Cantu delivered his speech where he praised the “development” that Tamaulipas was undergoing. It was during that speech, that Torre had a special VIP guest, his predecessor Eugenio Hernandez Flores. 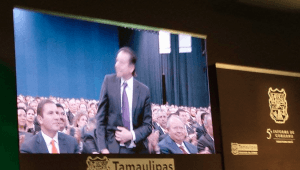 It was during that appearance there that Hernandez was quoted by Mexican media as saying “I am not worried” when asked about his arrest warrants in America.

As reported by Breitbart Texas, Eugenio Hernandez Flores (along with with yet another former governor, Tomas Yarrington Ruvalcaba) are wanted on federal money laundering charges by Homeland Security Investigations and the U.S. Drug Enforcement Administration. The charges allege that the two former governors took bribes from Los Zetas and the Gulf Cartel and they in turn protected the criminal organizations. 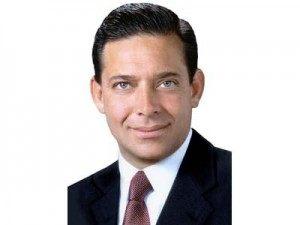 Despite being a wanted fugitive, Hernandez Flores was greeted with great fanfare by the political elite in Tamaulipas.

As reported by Breitbart Texas, under the current governor Egidio Torre Cantu, Tamaulipas has become one of the most dangerous places in Mexico, where as Breitbart Texas reported, criminal organizations like the Gulf Cartel and Los Zetas continually hold large scale gun-battles in metropolitan areas. The raging violence has also led to gory crime scenes where cartel members have dismembered rivals and placed their remains in ice chests along with  banners aimed at spreading fear among their rivals.

Most recently, as Breitbart Texas reported,  the Gulf Cartel in Matamoros under the leadership of Odon “Gordo Cherry” Azua Cruces has switched tactics and begun to target innocent individuals for kidnappings. The move has created a wave of terror along the border city.