The Office of the Texas Attorney General (OAG) is taking actions against local governments who are illegally or improperly posting signs prohibiting licensed Texans from carrying handguns.

The OAG is starting a process to crack down on local governments that are improperly or illegally posting what are known as 30.06 signs. These signs were designed to be used by private property holders to notify Texas Handgun License holders they may not carry concealed on the business’ property. The law is specific about where local governments can and cannot prohibit the carrying of a handgun by licensed individuals.

The term for the 30.06 sign relates to the Texas Penal Code, Section 30.06, Trespass by a License Holder with a Concealed Handgun.

The sign must contain the following text in at least 1 in. letters in contrasting color from the background, in both English and Spanish:

During the 2015 session of the Texas Legislature, Senate Bill 273 was passed to provide private citizens a pathway to file complaints against city and county governments that unlawfully place 30.06 signs and interfere with the rights of licensed Texans to carry.

“When uncooperative governments post signs to ban Texas citizens from carrying where it is legal, they are breaking the law and infringing on Texans’ Second Amendment rights,” the OAG’s website states. The website also has a page where citizens can file a complaint if they feel signs are improperly or illegally posted.

Texas Carry has been working closely with the Texas OAG to help develop the complaint process. Terry Holcomb, Sr., founder of Texas Carry said in a Facebook post Monday night, “We still have a ways to go but we will continue to work hard and fight for Texas citizens right to lawfully carry. We will also continue working to hold local governments accountable for following the law.”

The complaining citizen must first notify the local government and give them three days to remove the improper or illegal 30.06 sign. If they do not remove the sign the citizen can then file a complaint with the OAG, according to the OAG website. 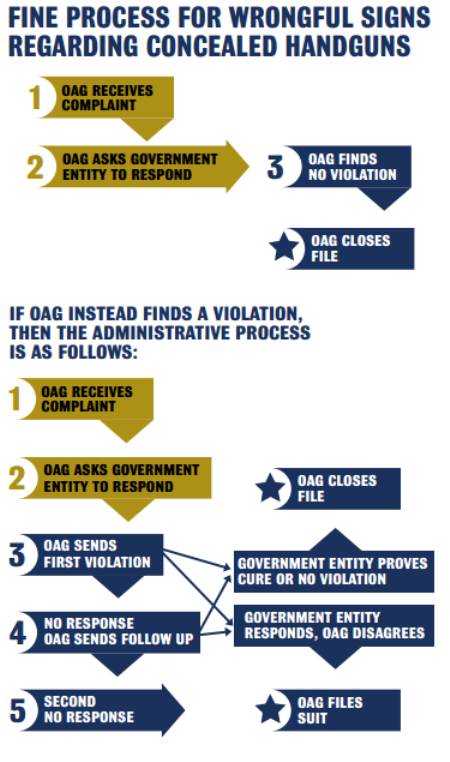 Office of the Texas Attorney General

Following receipt of a complaint, the OAG will notify the local government of the complaint via a letter. The OAG began sending out these letters to local governments on March 11. Additional letters were sent out on March 31.

The Dallas Zoo was found to not be in violation of the law because the zoo is considered to be an amusement park because of the rides that are located within the Zoo. Texas law prohibits the carrying of a handgun by a licensed handgun owner on the premises of an amusement park.

“Because the zoo meets all of the requirements to qualify as an amusement park in accordance with Penal Code§§ 46.035(b)(5) and (t)(l), the OAG determines the 30.06 sign at the front entrance of the zoo is not in violation of section 411.209 of the Government Code,” Assistant Attorney General Matthew R. Entsminger wrote in the letter to the Dallas Zoo attached below. The OAG notified the zoo that it is closing this complaint.

Officials in McLennan County appear to be preparing for a fight with the OAG. In December, the McLennan County Commissioner’s Court approved a police to maintain the ban on guns in the county courthouse and annex, the Waco Tribune’s Cassie L. Smith reported on Monday. County Judge Scott Felton told the news outlet he was disappointed with the AG’s opinion. He said he wants to challenge the opinion.

“The Legislature obviously intended for Section 46.03 to protect judges and others involved in the judicial process. It would appear inconsistent to assume that this protection was only intended within the confines of a courtroom or office where common hallways and areas are involved; essentially assuming that people are free to carry handguns in the same hallways and common areas used by the judges, prosecutors, witnesses, jurors, parties, etc.,” the county wrote in a letter to the AG in December.

According to the letters from the OAG, the offending local government may be held liable for a civil penalty of:

The letter also notified the recipient that each day of a continuing violation constitutes a separate violation. The recipient has the option of contesting the OAGs complaint and offering proof as to why they are not in violation of the law.

The OAG website states the following process for citizens to file a complaint:

Lana Shadwick is a writer and legal analyst for Breitbart Texas. She has served as an associate judge and prosecutor in Texas. Follow her on Twitter @LanaShadwick2