A small business photographer in Texas who made a poster against men being in women’s restrooms, has been threatened and her business has been attacked by transgender advocates. The poster has gone viral but Facebook has suspended her Facebook account. Her business “rating” on Facebook has “fallen” to 2.8 stars.

As of the time of publication of this article, the poster has received over 27,000 shares from her post on the Target Facebook page.

Joyce Moore first added the poster to her Facebook page on April 21st.

She told Breitbart Texas that she made the poster and published it on her personal Facebook page, and on Target’s Facebook page, because it was the right thing to do. She had no idea that the backlash against her small photography business would be so quick and so vindictive.

LGBT and activists for transgenders in women’s restrooms have retaliated by going to her Joyce Moore Photography Facebook page and slamming her in reviews. She has received 39 “1 star” ratings as a result and her overall rating has dropped to 2.8 stars from 5 stars.

Moore was warned that a Facebook page called “Entitlement is still a disease” found at www.facebook.com/EIADII/ had shared a link to her business Facebook page. The person warning her called the group a “hate group” and told her “They are on a mission to destroy you.”

The warning says that the post on the “Entitlement is still a Disease” Facebook page says “This lady created an awful meme about attacking trans rights. Be sure to leave her a wonderful review.”

Interesting, the website listed on the “Entitlement is still a disease” Facebook page is www.f**koff.com Clicking on the website link brings you to a graphic of Democrat presidential candidate Socialist Bernie Sanders. It says on the page, “FEEL THE BERN.”

Just a few of the “reviews” she has received to date: 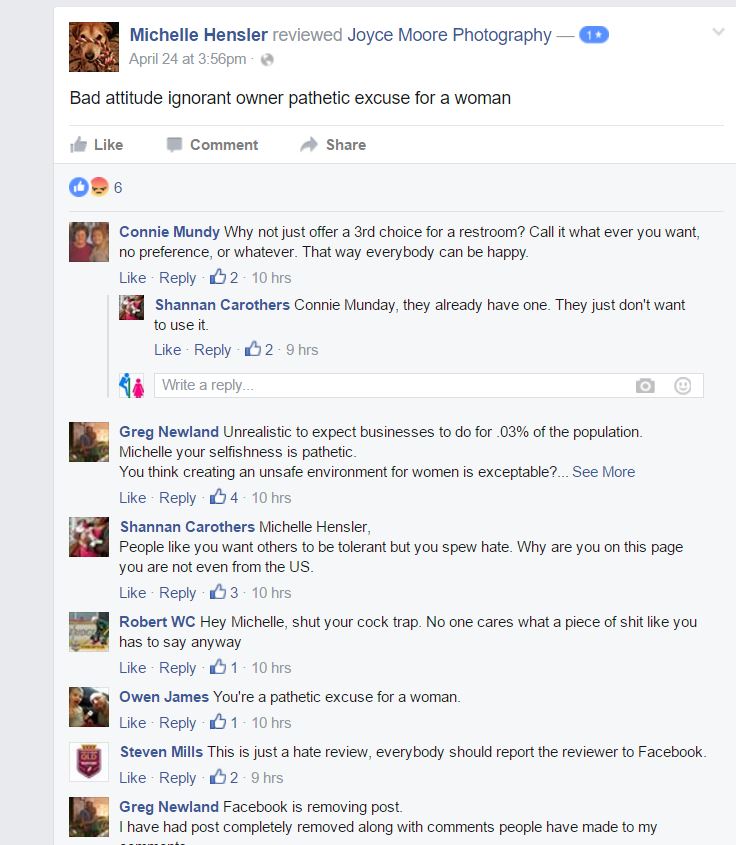 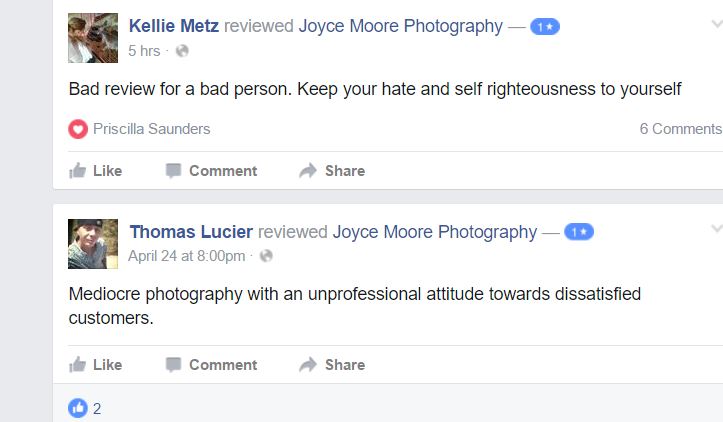 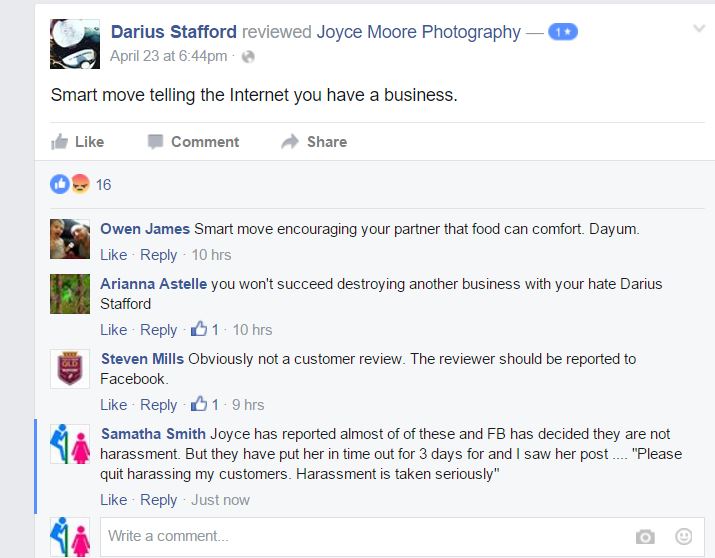 Moore has a photography business and she photographs children and families. She goes to schools to take photos of children. She says that one of the reasons she made the poster against the transgender movement, including the recent decision by Target business executives, is that she is concerned for children.

Ms. Moore told Breitbart Texas that she started making posters or “memes” when she saw a photo on a Facebook page that had a “I’ll Go With You” button. Used to promote a transgender bathroom agenda, they are used to say to transgenders, I will go with you to protect you in the bathroom. The website where the button can be found includes a section that tells people how to be “An #IllGoWithYouBuddy.”

Moore also became concerned when openly gay mayor, Annise Parker, was fighting for the Houston Equal Rights Ordinance (HERO). Although Houstonians defeated the measure by a margin of 61 to 39, the fight to get to that victory was extensive. It involved going up the court system to the highest court in Texas. Breitbart Texas reported extensively about this battle.

Moore is not the only person who has posted on Target’s Facebook page. Another Texan, Michelle Prescott, added this poster on an advertisement for soup on the store’s page.

As reported by Breitbart News, people are using social media to express their disgust and outrage about the decision by Target executives to allow transgenders or men claiming to be transgender, to use any bathroom or fitting room.

#BoycottTarget has topped Facebook’s top 10 trends for three days in a row, as reported by Breitbart News. The boycott petition by the American Family Association has as of the time of publication of this article, reached over 583,000 signatures.

Moore told Breitbart Texas, “It is insanity to allow males into female restrooms. My poster says it all.  I have a right to my privacy.”

As it relates to her business, she says she is “a small conservative business owner who has worked hard to keep high standards for my business and to keep my clients happy.” She says she “was totally appalled when haters came to my website and started giving me one star and hateful comments. It came to the point that I have changed or deleted all of my personal information.”

Moore says that even though all of this has upset her greatly, she has “no regrets.” She is also encouraged that over 30,000 people and “climbing” have shared her poster.  She says she told one distractor, “I will take your one star to protect the children.”

She asks that people continue to share her poster.

Lana Shadwick is a writer and legal analyst for Breitbart Texas. She has served as a prosecutor and an associate judge. Follow her on Twitter @LanaShadwick2