The border surge that started under then Texas Governor Rick Perry and was expanded by Governor Greg Abbott is saving lives, say officials with a South Texas sheriff’s office.

On Monday, Breitbart Texas reported on the horrors faced by illegal immigrants in what has become known as the “Brooks County Killing Fields” over the past several years. The number of reported deaths of illegal immigrants who were found dead on ranches in this county located 80 miles north of the Mexican border reached a high point of 129 in 2012, according to sheriff’s office numbers.

“Fortunately, because of the efforts of our deputies, the Border Patrol’s presence, help from the State of Texas with Texas Rangers, Department of Public Safety Troopers, and members of the Texas State Guard, the number of deaths this year is lower,” Brooks County Sheriff’s Office Chief Deputy Benny Martinez told Breitbart Texas in an interview this week.

Efforts by the vastly underfunded law enforcement agency have been focused on bringing in additional resources to reduce the numbers of deaths without putting the cost on the backs of county taxpayers. Brooks County is one of the poorest counties in Texas in terms of county tax revenue.

“We had to get creative,” says Chief Deputy Martinez. “We have a very limited amount of financial resources so we had to find other ways to reduce these deaths.”

In 2013, Martinez met Daniel Walden, a police academy instructor who was then serving as Donna Independent School District’s acting police chief. After discussing the situation of the deaths with Walden, the two law enforcement officers developed a plan to bring certified police officers to Brooks County as volunteers. The plan would immediately increase the patrol presence on the county’s highways where human smugglers had been operating with very little push back. 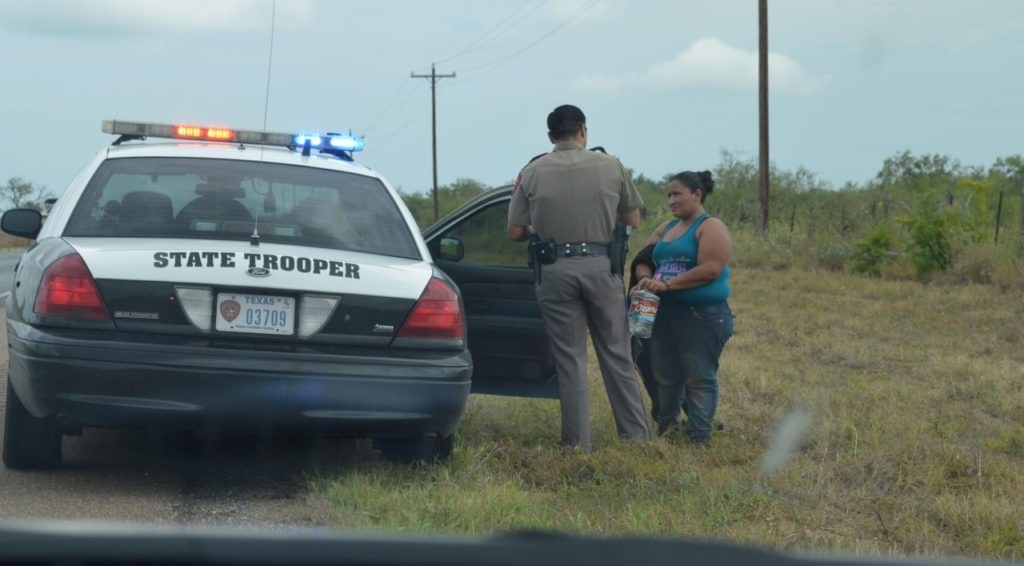 Texas DPS Trooper assists an illegal immigrant who had been left behind without water after falling behind her group. (File Photo: Breitbart Texas/Bob Price)

While this is a strategically good for the Border Patrol in interdicting drugs and human cargo, it is not good for the human smuggling coyotes who are attempting to deliver their load to places like Houston. They reacted to the checkpoint by forcing their human cargo to march through the ranches in Brooks County. This march often leads to days of trekking through a very hostile terrain of soft sand, extreme heat, hostile vegetation, poisonous snakes and other bandits looking to rob the illegal immigrants or steal them from the coyotes for their own purposes.

Martinez and Walden formed a non-profit organization called the Border Brotherhood of Texas to bring much needed manpower to the county. In 2014 when the group was founded, Brooks County was down to four patrol deputies to cover the county that is roughly the size of the State of Rhode Island. The group quickly brought extra law enforcement resources to the county to increase the presence on the roadways and also provide much needed backup to the full-time deputies who often patrolled the highways by themselves.

About that same time, the Border Patrol was reporting 27,206 apprehensions of illegal immigrants in Brooks County, according to a sign posted at the checkpoint in July 2014.

In the photo at the top of the page, Walden is seen talking with an illegal alien from Guatemala who had been left wandering in the brush with very little water and no food. “Our volunteers have dramatically increased the presence of law enforcement in the area,” Walden told Breitbart Texas in an interview this week. “We have been able to find more of these people before they get into a critical state and get them water before turning them over to Border Patrol.”

“What happened to this man is very common,” Walden continued. “If they can’t keep up because they are injured or exhausted, they are simply left to die.”

The Guatemalan man had been traveling for a month when he finally gave up from exhaustion.

The march through Brooks County is no easy task, even for a strong healthy male. The flat terrain and heavy brush coverage makes everything look the same and even an experienced person can quickly get lost without proper navigation equipment. The ground is made up of very soft sand. The sand is so soft that even four wheel drive vehicles get stuck on a regular basis. This makes every mile feel like three or four miles.

The heat of the Texas summer is relentless forcing exhaustion. And, most importantly water is scarce. The immigrants are told it is just a short hike around the Border Patrol checkpoint before they will get picked up on the other side. The reality is, it is more like a three or four day forced march. 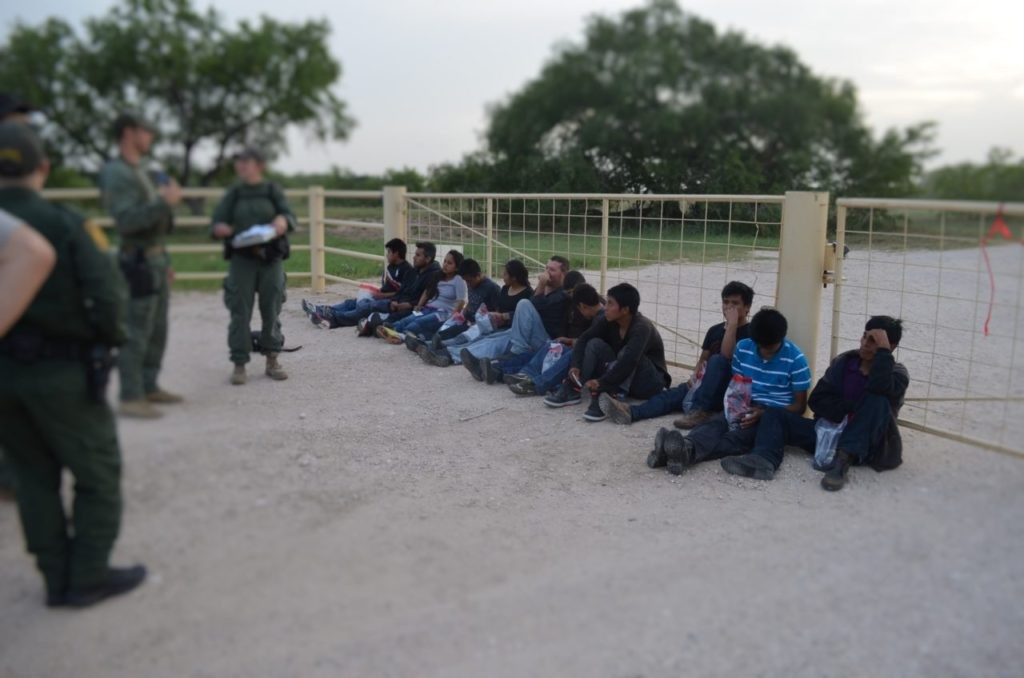 Border Patrol Agents tracked down a large group of illegal immigrants who had been dropped off by smugglers to hike around the Border Patrol checkpoint. (File Photo: Breitbart Texas/Bob Price)

In response to all of this and the high level of deaths discovered in the previous years, Martinez worked with U.S. Border Patrol officials to increase their manpower in the area. Members of the elite Border Patrol BORSTAR team were deployed from other states to put more agents in the fields to find the smugglers and their cargo. The deployment of these agents along with the extra patrol deputies had an almost immediate impact of reducing the death in Brooks County despite the massive influx of Central American illegal immigrants who were swarming the border in record numbers.

Shortly after this, Governor Perry ordered the Texas National Guard and additional DPS troopers to be deployed to the Rio Grande Valley Sector of the border to attempt to shut down or reduce the flow of illegal immigrants.

These Guardsmen and troopers working the Texas border surge were not originally deployed to Brooks County because the county is not recognized as a “border county” despite the presence of the Border Patrol Checkpoint. 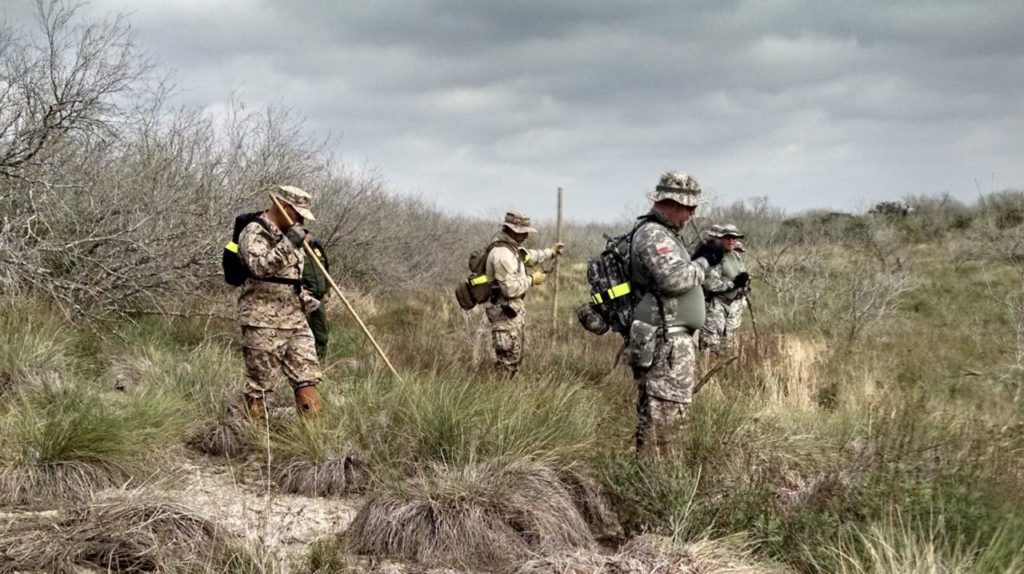 Martinez worked with Texas officials, including then Lt. Governor David Dewhurst, to arrange for the deployment of Texas Rangers and members of the Texas State Guard to his county to bring more resources for apprehension of smugglers along with search and recovery efforts for the remains of victims.

During one of the first State Guard deployments, a Honduran woman who was left to die by her human smugglers was rescued by the Guardsmen, Breitbart Texas reported.

“Mexican cartels and transnational gangs continue to exploit private property for drug and human smuggling, and too often, victims are left dead or dying in the elements with little to no hope of survival,” DPS Director Steven McCraw said at the time. “While DPS continues working to secure the border and combat criminal activity, we will also continue to support Brooks County and our state and federal partners on the border.” 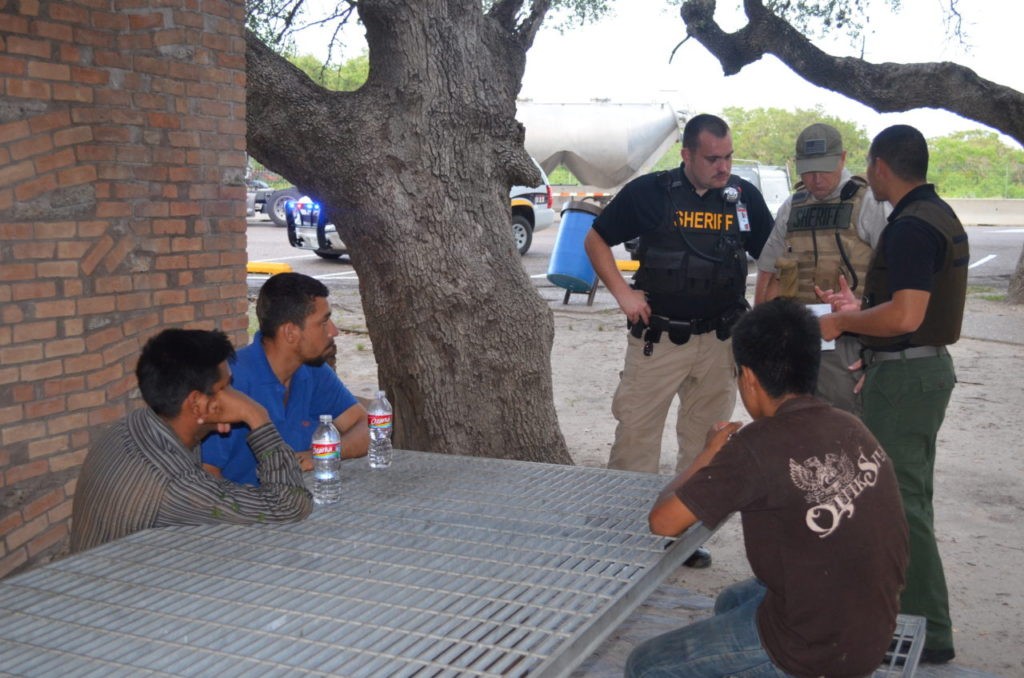 Brooks County volunteer deputies provide water to two Honduran men and a Guatemalan who had been wandering for three days without food and water. (File Photo: Breitbart Texas/Bob Price)

Despite a continuing increase in the numbers of illegal aliens, unaccompanied minors and incomplete families crossing the border in the Rio Grande Valley Sector, the efforts in Brooks County have shown results and reduced the numbers of lives saved.

On Thursday, Breitbart Texas’ Ildefonso Ortiz reported on two teenage girls, ages 13 and 15, Mexican girls were left to die in the killing fields of Brooks County. They were left with no water for at least 5 days. The 13-year-old girl was near death with a search team from the U.S. Border Patrol found the pair on a large ranch. The girl was last reported to be alive, but in critical condition at a hospital in Corpus Christi.

“We have worked hard to do as much as we can with the limited resources we have and have pushed state officials to send us help,” Chief Martinez said in the interview with Breitbart Texas. “The lives saved as a result speaks to how well our people are doing.”