A professional gator trapper snapped a photo of an alligator in her car on Sunday. The snout-pink-taped alligator was stuck behind her steering wheel and the window. The gator cracked the windshield trying to escape from the car.

The Rosenberg, Texas, gator trapper nabbed the gator on Saturday after he was seen on a road. She kept the alligator, “Buster,” overnight in her car. She took a video and then posted it on the “Gator Squad” Facebook page. Rosenberg is located in Fort Bend County, southwest of Houston.

If you listen to the video you can hear the gator hissing, apparently not pleased by being trapped in a car with his mouth tapped shut.

Christy Kroboth told CBS News, “If you catch them in the middle of the night, sometimes I keep them in the backseat of my car, in the trunk area and they’re fine.” Kroboth said. “But in the middle of the night, this guy tried to escape. He climbed over the row of seats and he’s now in the front windshield where he busted the windshield in two places.” 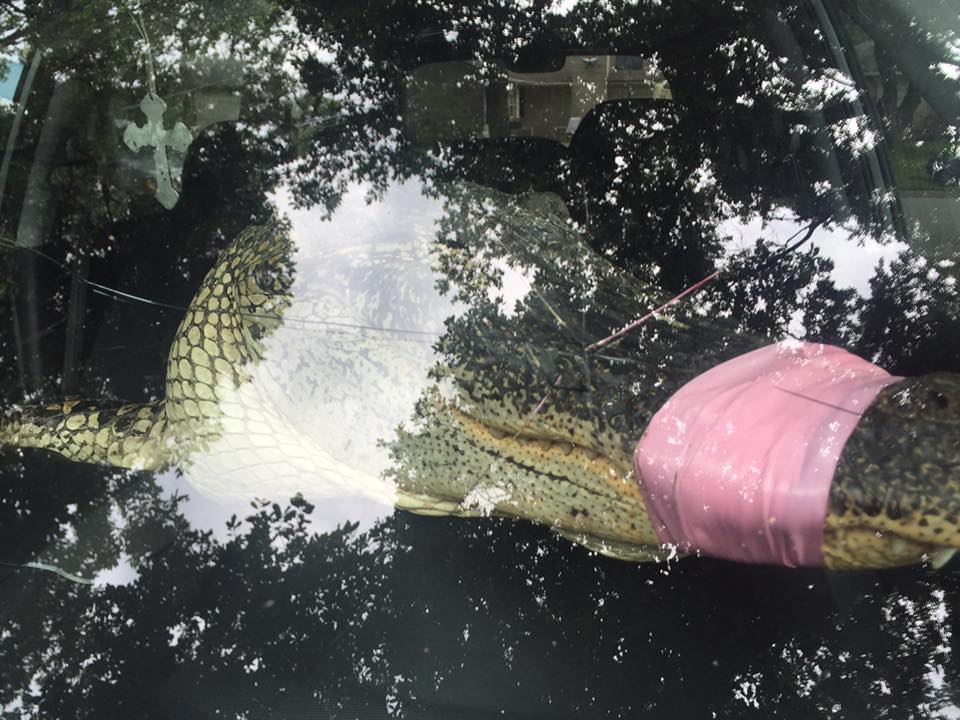 “This is a blind, seven-and-a-half [foot] alligator,” Kolbroth said. “He’s blind in his right eye. He can see in his left eye, and he has bullet wounds to his back. See those holes right there? Those are bullet wounds so someone was mean to this gator… even though he beat up my car, we’re still going to try to be sweet to him. It’s not his fault that he saw the light from the windshield. And besides, gators are not supposed to be caught!,” she adds.

“So no more busting windshields for this guy,” Kroboth said. “And nobody shooting him in the back anymore, either!”

Kroboth told Breitbart Texas, “I’ve always been a huge animal lover and I want to save everything. I got into trapping alligators because most trappers kill them and sell them for their skin and meat. I figured, I would get into it to catch them before another trapper could get to them and let the alligator continue to live. I figure, if me and the alligator both get to leave alive, then it’s a win-win for the both of us.” She added, “I also got into trapping to help educate people on alligators and to try to change their mindset that they are not the big bad monster people make them out to be. I am truly blessed to get to work beside these amazing animals everyday!”

If you would like to become a licensed alligator hunter, Field and Stream magazine wrote an article explaining how you can do so in Texas.