Patricia Washburn Kloefkorn is the court coordinator for a criminal court judge. The long-time employee of the judge posted the comments on her Facebook page on Sunday July 17 at 12:35 p.m.

The court employee posted on Facebook – “Another shooting of police officers. Out doing their job. Over BLM crap. Yes crap.”

She continues,”First of all if you have time to protest for BLM, GET A JOB,” and adds, “WLM. A lives matter, M lives matter.”

Kloefkorn also wrote, “since when did being black (interesting that it’s black, not African American) give you the right to shoot people. For no reason. Because you became judge and jury of issues you probably have no effing clue about.”

After Philando Castile was shot by a Minnesota police officer on July 6, the situation went viral and racial tensions were inflamed by a video produced by the dead man’s girlfriend, as reported by Breitbart Texas. Diamond Reynolds live streamed her bloody slumped-over boyfriend as he lay dying in the car. On the video, Reynolds can be heard talking to the officer, “You shot four bullets into him, Sir. He was just getting his license and registration, Sir.” She also said they were pulled over for a busted taillight.

Anti-cop threats and calls for violence on social media were substantial after the police-involved shooting of Alton Sterling on July 5. And, as reported by Breitbart News, Twitter took no action as calls for cop-killing swept the social media platform. Breitbart’s Lee Stranahan also reported how the institutional left and Black Lives Matter movement, manipulate the rhetoric after a police shooting.

There have been numerous Black Lives Matter protests after the Castile and Sterling police shootings in early July, as reported by Breitbart News.

“If you want to shoot somebody, join the military (goes back to getting job) and shoot the terrorists that are killing Americans and French and whoever else they decide to terrorize,” Kloefkorn posted on Facebook.

On July 14, an Islamic terrorist in Nice, France, mowed down and wounded hundreds when he drove a large commercial truck through crowds celebrating Bastille Day, France’s “Fourth of July” holiday. Among the casualties, a man and his young son from Lakeway, Texas, as reported by Breitbart Texas. Witnesses claim he shouted “Allahu Akbar” before opening fire on officers, reported Breitbart News.

Kloefkorn also had harsh words for President Obama saying, “And Mr. President – you have helped create this ****storm. You either need to end it or get out. Period.”

Obama has been criticized for fanning the flames of racial division and hatred towards police officers. Recently on July 18, Breitbart News reported that the leader of a coalition of black pastors said the political rhetoric by Obama and his administration has caused racial division in America and has “fostered a lawless society.”

Kloefkorn admitted “I am so damn angry about this senseless, stupid, barbaric and cowardly mess.” “It needs to end. Now,” she said at the very end of her Facebook post.

The Texas woman mentioned the “race card” being played on her, and not just by black people. 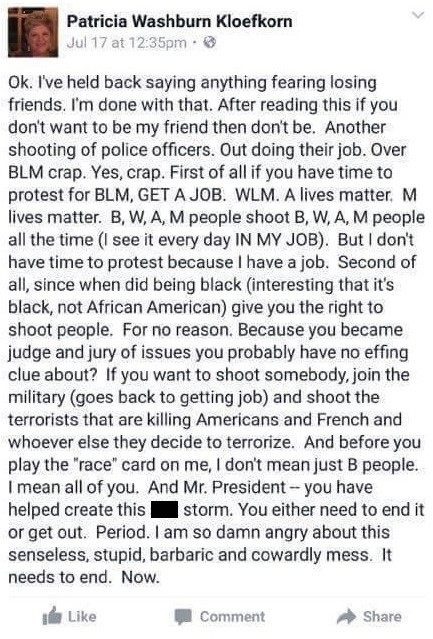 Judge Raquel West of the 255th District Court fired her long-time employee on Tuesday. Kloefkorn had worked for West both in private practice and as a court coordinator in her court.

Judge West issued the following statement as reported by the local ABC affiliate. She said, “Today the court coordinator of the 252nd District Court was terminated. The integrity of the Court is my top priority. Inappropriate and offensive comments made by court personnel will not be tolerated.”