HOUSTON, Texas – A previously deported illegal alien has been arrested by the Harris County Sheriff’s Office after he allegedly used a “music producer” scam to snare a 15-year-old girl and sexually assault her.

Pedro Lopez, 24, who had been deported from the U.S. multiple times, along with another suspect, used the social media apps, Kik and MeetMe.com to lure at least one young girl under the pretense of being a music producer, Harris County Sheriff Ron Hickman said during a press conference Tuesday. One of the victims was an underage girl. Both of the men allegedly sexually assaulted the victim, Hickman reported. 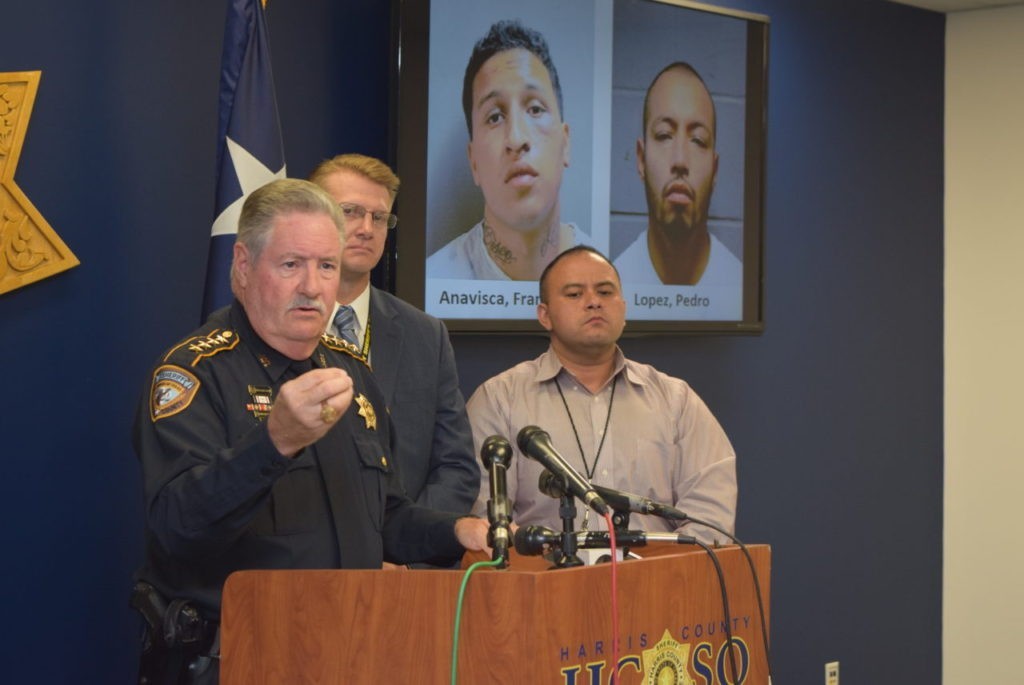 Lopez was working with Francisco Anavisca, 25, a U.S. citizen, according to detectives in the Harris County Special Victims Unit. The two men are reported to be members of the transnational criminal gang MS-13 and a local “Houstone” gang and have criminal records.

The two men lured a 15-year-old girl from her home in east Texas on October 16 under the pretense of being “music producers” looking for talent, the sheriff explained. After she arrived, the two men are alleged to have sexually assaulted her. She escaped after she contacted a friend on a cell phone. The friend called 911 and reported the crime. The two men were captured later after deputies rescued the girl from a trailer where she had been held in northeast Harris County. She had been assaulted multiple times, Hickman said.

Lopez, a Mexican national, has been previously deported two times following criminal offenses. In 2008, Lopez was convicted of Aggravated Assault with a Deadly Weapon and was deported after being sentenced to seven years in prison. He re-entered the U.S. and in June of this year, he was convicted for Driving While Intoxicated. He was again deported but wasted no time in returning to the U.S. to commit additional crimes.

Detectives working the case told Breitbart Texas they were able to identify the two suspects from information obtained at the scene. Anavisca was arrested by deputies on October 18. During the process of obtaining arrest warrants, Harris County detectives learned from Immigration and Customs Enforcement agents assigned to work with the Harris County Sheriff’s Office under the 287(g) immigration program that Lopez was a previously deported illegal alien with a violent criminal history.

Because of this information, deputies took extra precautions when they arrested Lopez on October 27. Both men were arrested without further incident, Hickman relayed.

Sheriff Hickman has been the subject of criticism for his continuation of the 287(g) immigration program that places ICE agents inside the Harris County jail. “This is exactly why this program is important,” Hickman said responding to a question about the program from Breitbart Texas. “Lopez is exactly the kind of guy this program was designed to identify.” He said his deputies were safer because they had the information about Lopez prior to making the arrest.

The sheriff warned parents to talk to their children about these new apps. “Our children are connected,” he said referring to the internet. “These new apps come up all the time and many are difficult for parents to monitor.” He said many of the new apps delete the photos or texts after a short time making tracking by parents difficult. “Some do not even register on the parent’s phone internet minutes,” he explained. “The most important thing is to talk to your children and make them aware.”

Hickman stated this is not likely the first time these two men have done this. “There is always the possibility of more victims,” he stated. He encouraged anyone who might be a victim, or might know of a victim to call his office at 713-830-3200.

At the time of his arrest, Anavisca was already wanted on an outstanding sexual assault warrant out of Deer Park, Texas. He was arrested in September on a felony sexual assault charge and manged to escape custody. His charges prior to the alleged sexual assaults includes a felony conviction for robbery and threats in 2009 where he received a four-year prison sentence. He also has charges of possession of marijuana, interference with a police officer, DWI, unauthorized use of a vehicle and criminal mischief.

Harris County Sheriff’s Lieutenant Eric Batton, who heads up the department’s Special Victims Unit, told Breitbart Texas he is grateful to his detectives who have worked so diligently on this case and others like it. He praised the victim in the case who stepped forward and identified her attackers. “The brave and courageous 15-year-old girl provided valuable information that led to the arrest of these two suspects who pray upon young children.”

He said Sheriff Hickman has increased the manpower in his unit which has led to a massive number of successful arrests and convictions related to child abuse and sexual assault.

Hickman said the two men are currently in the Harris County jail where they are being held without bond at this time.