The Office of the Texas Governor is offering a cash reward up to $15,000 for information leading to the arrest of anyone connected to the execution of the San Antonio officer this past weekend. This reward will be combined to bring the total reward up to $25,000.

All tips are guaranteed to be anonymous.

As reported by Breitart Texas, San Antonio Police Department Detective Benjamin Marconi was executed on Sunday afternoon when he was writing a citation.

The 20-year veteran from the police department died about 30 minutes after he was shot.

The person who executed the officer had initially been described as a clean shaven black man who is approximately 5 feet 7 inches to 6 feet tall. Information has been updated to reflect that the man had a beard. He was wearing a hoodie, baggy pants, and a gray shirt. This vehicle was seen fleeing headquarters after the shooting, the San Antonio Police Department reported. 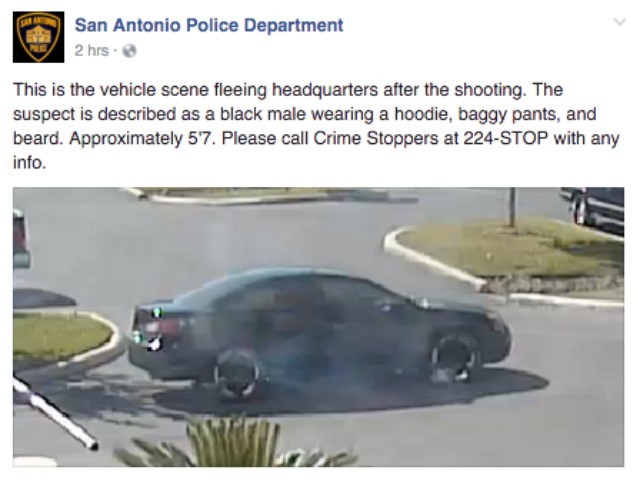 The Office of the Governor’s Fallen Hero Reward Texas Remembers Program’s $15,000 reward will bring the total cash reward up to $25,000 when combined with the San Antonio Crime Stoppers.

The program is funded by the Governor’s Criminal Justice Division. It is administered by the Texas Department of Public Safety (DPS).

In order to be eligible for the cash reward, anyone with information can provide anonymous tips by:

Police Chief McManus said, “It’s always difficult, especially in this day and age when police officers are being targeted across the country.”

According to the Officer Down Memorial Page, Detective Marconi is the 58th officer to be killed by hostile gunfire this year. He was the 127th law enforcement officer to die in the line of duty this year.

“It’s a very tough, unfriendly world when Politifact starts asking whether we have really lost the most officers, and when a state senator falsely claims Texas has lost more officers in car accidents than gun violence,” the leader of the largest law enforcement union in Texas said. He added that this is the atmosphere in which peace officers now find themselves, Breitbart Texas reported on October 6.

Charley Wilkison, the executive director of CLEAT (Combined Law Enforcement Associations of Texas) was “fact-checked” by Politifact on September 19 after he was quoted saying that “Texas has lost the most law enforcement officers in the line of duty of any state in America.”

Wilkison told Politifact that his figures were from the Texas Commission on Law Enforcement (TCOLE). The names of officers lost in the line of duty, 1,955, is on the Texas Peace Officer Memorial in Austin. Eligibility is determined by the Commission on Law Enforcement under the TCOLE rules. While Wilkison’s number was four higher than this total because of a local police department’s paperwork tardiness, Politifact determined that Texas does in fact lead the nation in the number of officer deaths.