The Texas Department of Public Safety (DPS) reported nearly a quarter million criminal aliens have been jailed in Texas over the past six years. The State’s criminal courts handed down convictions for nearly 600,000 criminal offenses during this period for crimes including murder, assault, burglary, drug possession and distribution, kidnapping, theft, robbery, sexual assaults, and weapons charges.

According to a report from the State’s top law enforcement agency, more than 220,000 criminal aliens have been booked into local Texas jails during the period of June 1, 2011, and May 31, 2017. The report obtained by Breitbart Texas states the criminal aliens cited in the report have a laundry list of criminal activity during their time in the state. 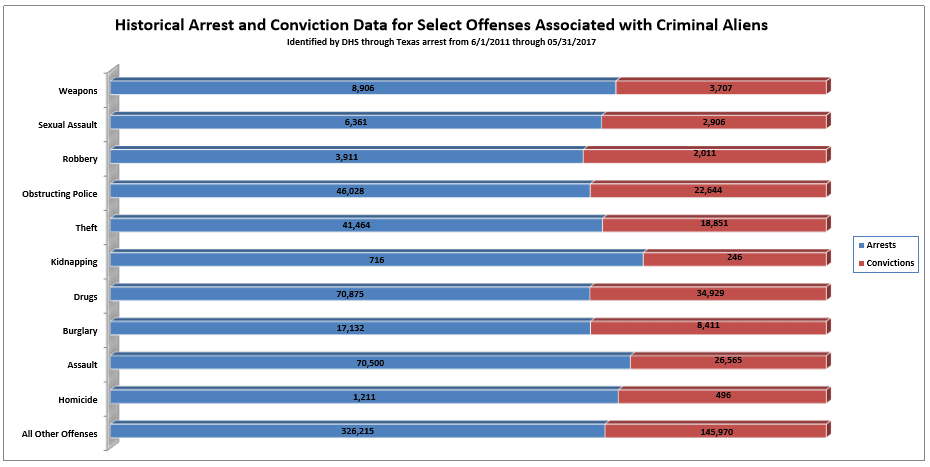 Officials stated according to the Department of Homeland Security (DHS), at least 148,000 (66 percent) of the more than 220,000 criminal aliens jailed entered the U.S. illegally.

Sixty-six percent of those convictions were earned by criminal aliens illegally present in the U.S. at the time of their arrest, DHS officials reported to DPS.

DPS officials noted these arrest records and criminal convictions only include offenses in Texas. The arrestees could have records in other states. The numbers of illegal immigrants arrested and convicted could also be larger as DHS does not always have fingerprint or biometric information to match records to actual persons.