BROWNSVILLE, Texas — The son of the former leader of the Gulf Cartel is facing new federal charges in connection with an incident where he pulled a handgun at a Texas border city bar.

According to new information in court records, the cartel heir claimed to be law enforcement by showing a badge from the Cameron County District Attorney’s Office.

Osiel Cardenas Jr, the son of former Gulf Cartel leader Osiel Cardenas Guillen, was handed down a new charge of felon in possession of a firearm. The younger Cardenas has been in federal custody since his arrest last week after flashing a handgun at a bar in Brownsville. Recently, the U.S. Bureau of Alcohol Tobacco Firearms and Explosives filed new charges due to his felon status.

The arrest took place on March 14 shortly after 2 a.m. when Brownsville Police officers responded to Sky Night Club (Sky Bar) in connection with a call about a man with a handgun inside the business. 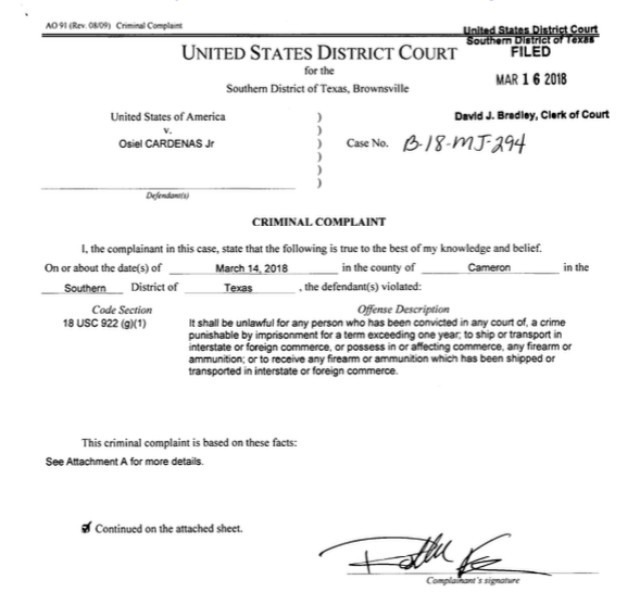 Authorities arrived and arrested an intoxicated Cardenas after he allegedly pulled out a chrome Bersa .380 pistol from a “man purse” that he wore on his chest and waved it around the bar. The man allegedly yelled out that he was a U.S. Marshal and flashed a gold police badge hanging from his neck. Court documents revealed that the badge was authentic, used by investigators from the Cameron County District Attorney’s Office. It remains unclear how Cardenas was able to obtain it. 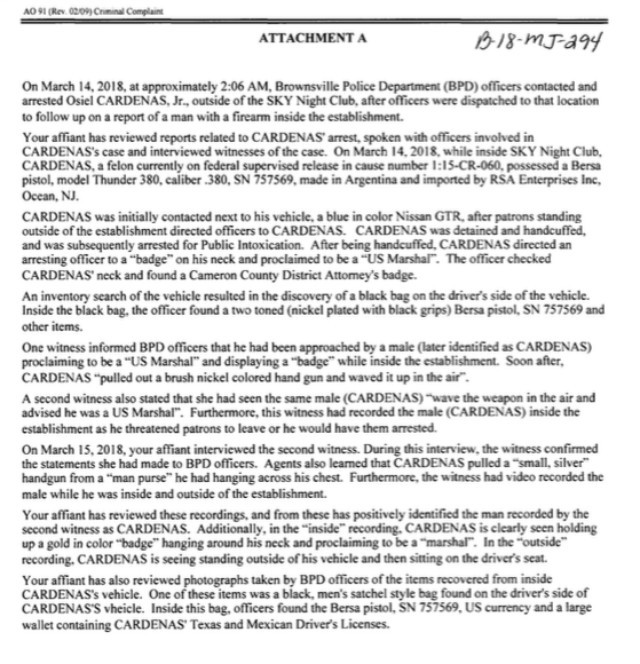 After his arrest on state charges, Brownsville Police turned him over to the U.S. Marshal Service which took him before a federal judge in connection with a violation of his supervised release. The court began the process to revoke his supervised release and have him serve the remainder of the term in prison.

In 2015, federal authorities arrested the younger Cardenas as he was trying to cross from Brownsville into Matamoros with ammunition in his vehicle. Cardenas pleaded guilty to that charge and received a 10-month prison sentence followed by three years of supervised release, Breitbart Texas reported. Part of his conditions stated that Cardenas would not be able to violate local, state, and federal law.

Cardenas’ father is currently serving a 25-year-prison sentence for his role as the former leader of the Gulf Cartel. The elder Cardenas is also responsible for creating a group called Los Zetas who initially were his personal guard but eventually broke off and formed an independent cartel.