A grand jury in San Jacinto County, Texas, returned a three-count indictment against its county judge for alleged burglary of a county office, tampering with a government record, and forgery. Two of the charges are state jail felonies while the third is a Class A Misdemeanor.

Following a presentation of evidence from a special prosecutor from the Office of the Texas Attorney General, a San Jacinto County grand jury returned a three-count indictment against County Judge John Lovett, Jr. on Monday. The indictment alleges Lovett illegally entered the office of San Jacinto County Clerk Dawn Wright and used her facsimile signature stamp to falsify a government document. Both of these allegations are state jail felonies. The indictment further alleges that Lovett forged the certification of a Notice of Meeting of the San Jacinto County Commissioners Court by using the stamp to make it appear the County Clerk authorized the document. 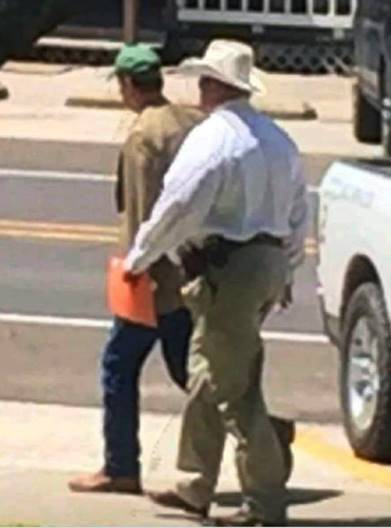 Following the action by the grand jury, San Jacinto County Sheriff Greg Capers arrested Lovett and escorted the county judge to the jail for booking and processing, the sheriff told Breitbart Texas. “About an hour later,” Capers said, “the State Commission on Judicial Conduct announced Lovett’s suspension without pay.”

Having considered the Indictment, the Commission concluded that the judge is charged with Burglary, Tampering with Governmental Record, and Forgery, one of more of which constitutes a felony offense, and determined that John Lovett, Jr. should be suspended, without pay, from the office of County Judge of San Jacinto County, Texas.

Such suspension shall remain in effect until further orders of the Commission.

Capers said Lovett made no comments during the arrest and complied with instructions.

Monday afternoon, Precinct 1 Justice of the Peace Beth Sewell allowed Lovett to be released on a personal recognizance bond.

The investigation into the alleged actions of the county judge began in July 2017 when an alarm at the office of the San Jacinto County Clerk triggered a police response from the sheriff’s office, KTRK ABC13 reported. Deputies arrived and reportedly found Levett, who said he was the one who entered the office. He allegedly claimed his position as county judge gave him the authority to use a master key to enter the premises.

“No one else should be able to come into my office other than me or my staff. I can confirm that it was broken into because there is proof of my file stamp being used,” Wright told the Houston ABC affiliate. “As an elected official, I’m not very happy about what’s been going on, but with the ongoing investigation I wish not to make any comments.”

Lovett attempted to justify his actions last July and told the reporter, “The clerk of the court is subservient to the court. If I need to go into the office of the court, I think I have every right to do so.”

In Texas, the office of county clerk is a governmental office that is independently elected by the county’s voters.

“The sheriff’s office is investigating the alarm call,” Lovett continued in the 2017 interview. “I don’t believe they are investigating any crimes.”

This is not the county judge’s first run-in with law enforcement since being elected in 2014.

Shortly before the alleged July 2017 break-in, a Texas Department of Public Safety (DPS) trooper cited Judge Levett for failing to maintain financial responsibility by not having insurance and for driving on the wrong side of a roadway. His actions allegedly caused a 16-year-old girl to crash her car, ABC13 reported. She suffered cuts and bruises in the crash.

Lovett said he was trying to conduct county business and was working on a mental health emergency when the crash occurred.

The county judge announced he would not run for re-election in his current office following these incidents. Instead, Lovett announced he would seek election to the position of Justice of the Peace for Precinct 1. During the March Primary Election, Lovett finished second in a six-way race to Christina McGee. His name is currently on the ballot for the runoff election scheduled for May.

“While there are many rumors afloat, we stand steadfast in support of our judicial system and it’s ability to discern culpability,” the chairman continued. “The San Jacinto County Republican Party will continue to move forward in our efforts to have a positive impact in our county.”

The Commissioners Court met in emergency session on Monday and appointed Precinct 4 Commissioner Mark Nettuno to temporarily fill the position of county judge while Lovett remains under suspension, Wright said. A second emergency meeting of the court is scheduled for Tuesday.