NUEVO LAREDO, Tamaulipas — Roughly 200 protesters took to the streets demanding the Mexican military leave the city. The protest was sponsored by Los Zetas faction Cartel Del Noreste, which has been on the receiving end of numerous raids costing the criminal organization drugs, weapons, and cash.

The protesters waved signs and poster boards alleging that the Mexican Navy kidnapped and murdered various teenagers from Nuevo Laredo. The group blocked the entrance to one of the city’s international bridges to Texas as well. The protesters claim that as many as 43 were kidnapped and executed by troops. The protesters made no mention of the raging cartel war occurring throughout the city. 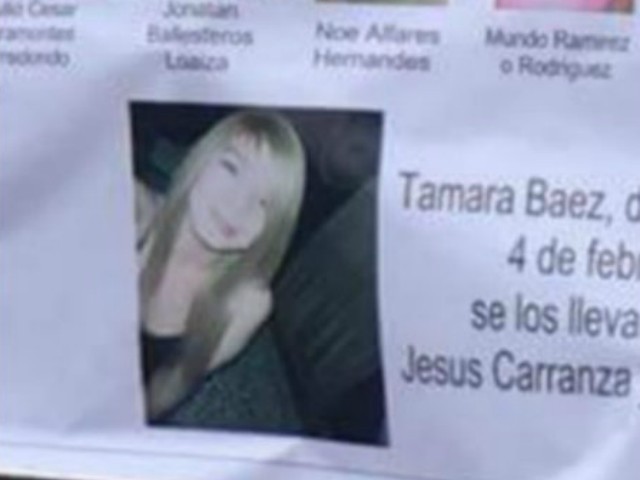 One of the poster boards and signs show the photograph of a Nuevo Laredo resident named Tamara Baez, one of the missing victims. A search of Baez’s Facebook page makes various references to her apparent life with Los Zetas and shows photographs of her holding weapons and radios.

In March, teams of CDN gunmen carried out a series of ambushes against Mexican Navy infantrymen and three members of a family were caught in the crossfire which also injured more than a dozen people. The CDN were wearing uniforms and vests matching the Navy. The three members of the family were shot by a military helicopter by accident.

The practice of paying protesters supposedly started in 2006 in the border city of Reynosa–at a time when Los Zetas were the armed wing of the Gulf Cartel. Under the leadership of the late Gregorio “Don Goyo” Saucedo, cartel operators would pay demonstrators in Reynosa, Nuevo Laredo, Monterrey, and the resort city of Cancun to claim authorities were abusing their power and targeting innocent civilians.

“M.A. Navarro” from the Cartel Chronicles project contributed to this report.