A CBS News reporter appeared shocked and afraid after witnessing an illegal border crossing near Roma, Texas. The reporter said he and his film crew were threatened by a “scout” who told them the area was not safe and to go away.

CBS News reporter David Begnaud traveled to Roma, Texas, this week to cover a story about Texas landowners getting notices about a proposed border wall. While shooting a segment along the river border, he was shocked to see a group of illegal immigrants making their way across the river in broad daylight a few hundred yards from a U.S. Customs and Border Protection port of entry. He was even more shocked when a man with a two-way radio approached them and told them to leave.

Today, on assignment in Mexico, producer Mark Hooper & I saw a “scout” guide a smuggler across the Rio Grande, in a raft, to deliver 2 people to the U.S. who entered illegally right near a legal border crossing.
The scout threatened us.
Our report: https://t.co/K8OdASmbGI

“What was surprising for us to see is that this happened in broad daylight about a hundred yards from that international bridge,” Begnaud said while gesturing to the port of entry, “where there are dozens of Customs and Border Protection officers.”

He seemed shocked that CBP officers processing vehicles and pedestrian traffic on the bridge did not notice three people on a makeshift raft making their way from Mexico to Texas.

Begnaud described being confronted by a man who he later called a “scout.” The “scout” is a person who likely works directly for the cartels that control all illegal crossings of humans and drugs across the Rio Grande River. 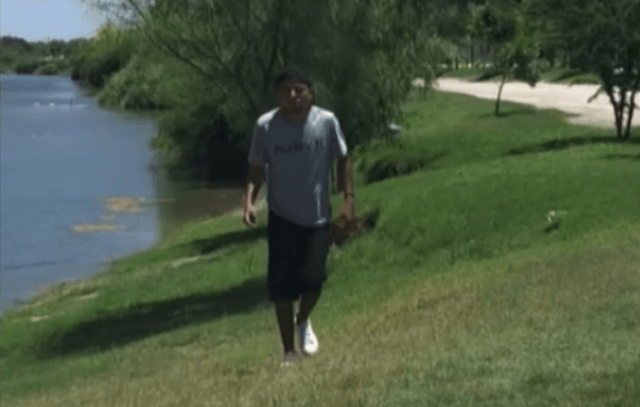 While the CBS News reporter says he doesn’t speak Spanish, the man’s message was clearly understood. “I look over toward him and he’s gesturing, essentially telling me to get out,” Begnaud stated. “He ends up saying to my producer and I, ‘ it’s not safe here and you need to go.”

“I’ll tell you, we were scared,” he said. “It was ominous to listen to him and he clearly was letting us know that it was time to get out.”

He explained that the “scout” had a walkie-talkie in hand and that he was talking to the smuggler on the raft.

“We could hear the guy in the raft talking back to him, and they were telling us to get out of the area,” the reporter said. He went on to explain that the “scout” watches and lets the smugglers know when it is safe to cross.

Begnaud also seemed surprised to learn about the intelligence level of the human smuggling operations. He said the incident he witnessed occurred during a Border Patrol shift change. He said a source within Border Patrol told them, “The smugglers, they know exactly what time to do this type of activity here on the river.”

He said residents he talked to in Roma want to see more border security. He said they want more Border Patrol agents, equipment and modern technology.

“I’ll tell ya, you don’t need much modern technology to see what we saw today,” Begnaud concluded. “It was clear, it was evident, and it happened quickly. The guy got them on to this side, they ran off into the woods, and from what we can tell, Border Patrol never found them.”

Roma, Texas, is located between McAllen and Laredo. It is in an area where there is no border fencing or walls at all. There is nothing to stop people from simply walking, wading, swimming, or being floated across the Rio Grande River, Border Patrol agents have repeatedly told Breitbart Texas.

Border Patrol officials responded to an inquiry from CBS News about the incident. “Roma, Texas, is located in one of the most volatile areas of the southwest border. Smuggling events occur daily, at all hours, as criminal organizations seek to exploit any shortages or gaps in border infrastructure, technology, and personnel. These criminal organizations will also utilize fear and intimidation in communities on both sides of the border to further their illicit enterprise.”

Rio Grande Valley Sector Chief Patrol Agent Manuel Padilla, Jr., also responded to the incident via twitter, saying the reporter captured more than he thought he would. “Thanks for sharing the dangers,” Padilla wrote.

Smugglers at work and this time a reporter captures more than he ever thought he would, as he is told by a smuggler to leave the area! @DavidBegnaud Thanks for sharing the dangers. @CBSNews @CBP #BorderPatrol https://t.co/kwUtbjgwAc