Reversing a three-month trend, the apprehension of migrants illegally crossing the U.S.-Mexico Border spiked upward in August. A massive increase across the southwest border moved the number of arrests to record levels.

During August, Border Patrol agents apprehended 37,544 migrants who illegally crossed the border between ports of entry. This is up from 22,293 in August 2017 — an increase of more than 68 percent, according to the August Southwest Border Migration reported published Wednesday afternoon by U.S. Customs and Border Protection officials. The number of arrests is also up 20 percent from July 2018 when agents apprehended 31,299 migrants. 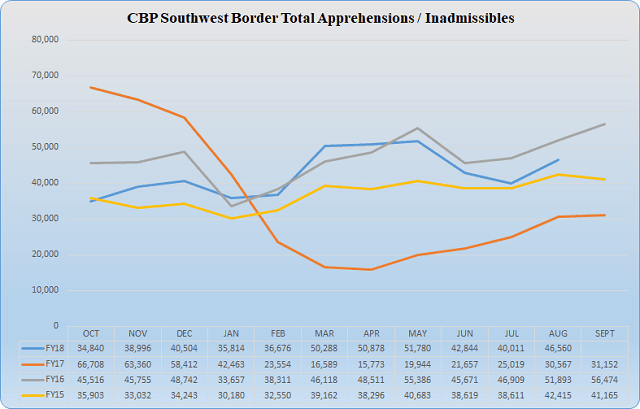 The chart provided by U.S. Customs and Border Protection graphs the apprehension of illegal aliens between ports of entry and those determined to be inadmissible at ports of entry along the U.S.-Mexico border.

“August Southwest Border Migration numbers show a clear indicator that the migration flows are responding to gaps in our nation’s legal framework,” Department of Homeland Security Press Secretary Tyler Q. Houlton said in a written statement. “While the overall numbers are consistent with an expected seasonal increase, the number of family units along the Southwest border increased 38 percent – 3,500 more than July and the highest August on record.”

A large portion of the increase is connected to large groups of Family Unit Aliens (FMUA) and Unaccompanied Alien Children (UAC) who began moving across the border following court-ordered restrictions on how long minors can be held in immigration centers. Central American families and cartel-connected human smugglers have learned this nearly ensures successful entry and release into the United States.

Smugglers and traffickers understand our broken immigration laws better than most and know that if a family unit illegally enters the U.S. they are likely to be released into the interior,” Houlton explained. “Specifically, DHS is required to release families entering the country illegally within 20 days of apprehension.”

“We know that the vast majority of family units who have been released, despite having no right to remain in any legal status, fail to ever depart or be removed,” the DHS press secretary continued. “Through the third quarter of FY 2018, only 1.4 percent of family units have been repatriated to their home country from noncontiguous countries such as El Salvador, Guatemala, and Honduras.”

In addition to the increase in overall migrant apprehensions and the apprehension of family units along the border, the arrests of UACs also increased from the previous month. In August, Border Patrol agents apprehended 4,396 unaccompanied minors. This is up from 3,920 the month before — an increase of just over 12 percent.